I am writing to you from Denmark. I went to Copenhagen to pay my last respects to Dan Uzan, ז”ל, who was murdered while guarding the bat-mitzvah celebration at the synagogue. I write with a heavy heart after the great sadness which pervaded the funeral, after spending time with the Jewish community members and Dan’s family, who are all grateful for the solidarity that engulfs them. Dan’s smile and valor were not buried with his body.

I chose to attach a picture of the hoards of flowers that lie along the site of the synagogue and the Jewish community house where I reside. Last night I had a hard time getting into the building because of all the flowers which threatened to block the entrance. As a matter of fact, this morning it would have been useful to have one of the snowplows awaiting the impending snow at the entrance of Jerusalem in order to plow my way out of the building, through the flowers. The love and great sense of identity the Danes hold  for the Jewish people is very heartwarming. My father recollected how, when he was a boy of 14, the Danes risked their lives and saved the Jews during the Holocaust quietly and courageously. Today their children and grandchildren are continuing in their way.

I am listening to the media in Israel and hear the popular tones of speakers after terror attacks by ISIS and their like, which tend to denounce not only the terrorist attackers, but the entire Islamic world. I regret this tone. I believe with all my heart that we need to act together  – Jews, Muslims and Christians to create social justice and peace and to mend the world in G-d’s kingdom. But for individuals who do not share in our world of belief, how is it that you do not understand that labeling  all Muslims as our enemies will not help us instrumentally  fight against terror? There are some 300,000 Muslims in Denmark. Do we want all of them as our enemies, as potential terrorists?

During this time in Denmark, I became acquainted with an initiative that provides me with great hope. I continue to believe that a significant change in the public sphere is imminent , and I would like to share this with you: Scores of young Muslims turned to my community in Norway and asked for permission to carry out their idea, which stems from the tradition in the Koran. Their initiative is to physically surround the synagogue in Oslo. The idea is to relay the message that terrorists who will attempt to harm Jews, will have to harm them first. They started to publicize this initiative on Facebook just yesterday, and by this morning I have learned have had an amazing turnout of over 800 Muslims join their initiative. 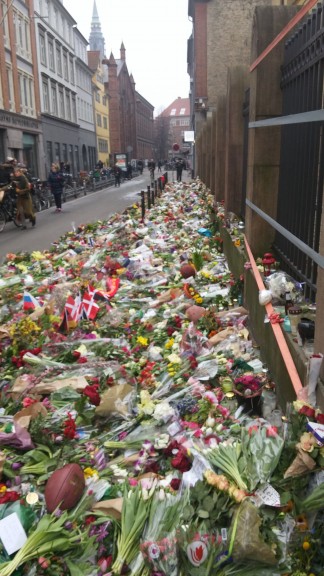 The site of the synagogue in Copenhagen

I have no doubt that this story will raise hope in the hearts of the masses – we must live together in every place in the world – Europe, the United States and, yes, in the Middle East too, to create a better world together. Whoever doesn’t believe so and wants a clash of civilizations is acting in a way which is not only immoral, but also very not wise. Fighting terror by all means includes building a coalition with anyone willing to  be a partner in creating a world in which we can live together, and not at each other’s expense. It may be complex, but it’s true.