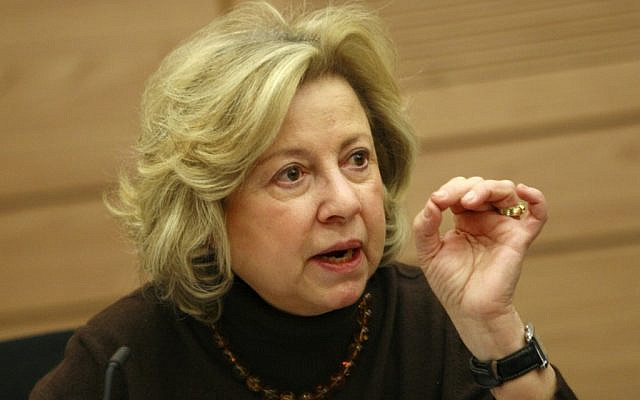 Colette Avital, in January 2008 when she was a member of the Knesset. (Olivier Fitoussi /Flash90)

Controlling the narrative is one of the most devious, effective and time-tested techniques for maintaining hegemony. Nowhere is this more apparent than in the realm of gender relations. Over the weekend, an uproar broke out when Colette Avital — former member of Knesset, ambassador, and public personality — revealed that she was repeatedly physically harassed during her long diplomatic career (including by the late Shimon Peres). This was compounded just yesterday with Minister of Intelligence General (res.) Elazar Stern’s admission that he routinely shredded anonymous complaints when he served as the head of the manpower (sic) division of the Israel Defense Forces. What started as a tempest has turned into a full-blown hurricane that will subside only if its manifestations, impact, effects, and causes are uncovered and confronted.

The brouhaha surrounding Gidi Weitz’s interview with Colette Avital in Haaretz on October 8, in the wake of the publication of her autobiography, The Girl in the Red Scarf, exemplifies the complexity, depth, and ongoing relevance of efforts to belittle women’s experiences and dismiss their contribution to the country. By extension, it distorts Israeli history and perpetuates norms that sustain and enable ongoing gender inequality. It therefore amplifies the cries of many women today for sweeping social change.

Avital’s candor has garnered as much furious a pushback as sympathetic exclamations of support. Her story has been assailed from four different directions, each highlighting a different aspect of Israel’s ongoing gender conundrum. The first, and the most obvious, centers on the timing of her revelations – and hence their veracity. Why did she wait until now to expose her harassment, especially by the high and the mighty? Women, as well as men – many, but not all, of an older generation — have suggested that this belated awakening is itself suspect. They thereby demonstrate little to no understanding of what women have to go through to digest and then internalize what they have experienced. It took Colette Avital, now 82, many years to understand that what she underwent on a regular basis during her storied career was morally unacceptable and that she could no longer remain silent.

Like many of her age-set, Avital was led to believe that sexual overtures were an integral part of that gender discrimination that she experienced throughout her extensive career. Unlike her male counterparts with similar credentials, it took her much longer to gain entry into the diplomatic corps. Her progress was impeded, time and again, precisely because of her gender (“female diplomats are more susceptible to blackmail, especially if they’re single”; “you can’t defend yourself because women tend to be hysterical”; “a woman can’t be appointed as an ambassador”). She was led to believe that physical assaults were part of this pattern of gender bias. But only with time and perspective did she comprehend that those salacious rumors were also a means of holding her back professionally. Her critics today, by repeating that sexual harassment was then a norm and dismissing its effects on her career, only reflect the tenaciousness of such gender-based prejudice.

Nothing demonstrates this better than what she endured at the hands of Shimon Peres, a man she admired professionally and rebuffed personally. Anyone familiar with Colette Avital’s work also knows full well that Peres held her back at critical junctures in her career. Since she entered public life in the late 1990s, she has been hounded by intimations that her success was due to her relations with that powerful man.

Sharing these episodes therefore has nothing to do with the fact that Peres is dead and cannot respond, as her critics stridently claim: he has been gone for five years. By directly confronting these nasty allegations against her now, Colette Avital is conveying critical messages: that the personal and the political are indeed intertwined, and that women cannot be systematically subdued. With realization has come action: the fulfillment of the obligation to set the record straight not only for herself, but for scores of others who have suffered similar indignities and for whom she is a role model. Only at the end of this painful journey of self-awareness could she take control of her story.

The timing is closely linked to a second question, motive. Why did a woman with so many achievements choose to disclose such intimate details at this stage in her life? What can she possibly gain? If those who are quick to accuse her today of opportunism or a thirst for publicity would take the time to read the full interview with her — if not her autobiography — they would probably reconsider. So, too, would those who are gloating sanctimoniously over the imputed linkage between two avowed political doves.

Avital carefully explains, in her calm and reserved manner, that what prompted her to discuss some of her most difficult experiences relates directly to the professional context in which she grew up: Israel’s diplomatic service. The path of women in the Foreign Ministry has traditionally been slow and tortuous. For far too long, only a precious few rose to ambassadorial rank, and most of them never married. Some wives of diplomats held high diplomatic positions without receiving either pay or any job security. (Full disclosure: my late mother, Zena Harman, was elected chair of the Board of UNICEF, the first Israeli to achieve such a high UN post, without ever receiving remuneration, while her husband served as Israeli ambassador to Washington.) Israel consequently forfeited the benefits that could accrue from the service of many talented women. Only recently, and still insufficiently, have they reached the upper echelons of the diplomatic corps. Recounting all aspects of how difficult it was — and, in many respects, still is — for women to succeed in this gender-discriminatory milieu is therefore particularly pertinent. And it cannot sidestep uncomfortable facts.

What is true for career diplomats is familiar to women who have blazed their way to the top in other professions — from academe and law to medicine and hi-tech. It is also the lot of too many who have found their entry into preferred fields blocked and have had to settle for poorly paid and less prestigious alternatives. Ask any recent woman graduate or new mother what her career options are today in Israel’s gendered labor market. By laying out the obstacles she faced and by showing how she now perceives them, Colette Avital offers vital insights on how to deal with these numerous roadblocks. This is a priceless, nuanced, contribution to understanding the dynamics of gender gaps in contemporary Israel. It also acts as a powerful antidote to the debasement of the place of women from diverse backgrounds in the country’s growth — one which all too often has been either invisible or undervalued.

The reassessment of the role of women in Israel’s history necessarily relates to a third aspect of the present debate: the implications of gender relations for the understanding of the country’s past in general and the place of key personalities in particular. Can the achievements of leaders be neatly divorced from their personal conduct? How will they be judged as time unfolds? What expectations exist of those currently at the helm? Do these include issues related to personal comportment? Israelis have a tendency to idolize their leaders of yesteryear, even at the expense of glossing over their warts and ignoring their personal frailties — especially when these concern intimate matters.

Avital’s story cautions against this myopic and distorted view of history. It serves as a much-needed reminder that few of the country’s founders and subsequent leaders have been flawless. Without carefully looking at their work and their behavior in its totality, it is impossible to either understand the past, let alone avert a repetition of its pitfalls. More to the point, it does not permit the rectification of previous mistakes and the reformulation of normative guidelines.

Indeed, the most significant aspect of the present gender-centered debate focuses on a fourth and final question: its root causes. By questioning the validity of the norms that have cemented gender inequality since Israel’s inception, Colette Avital joins a growing number of Israelis — both men and women — who grasp that the perpetuation of these impulses adversely affects the equality, social justice and freedom of all citizens of Israel. Ongoing gender inequities in discourse, behavior, practice and mindset are a social issue and can only be addressed by altering the fundamental structures that sustain these inequities in accordance with basic democratic values. This — and not prurient and irrelevant nitpicking — is the challenge Avital and others now pose.

With hardly anything to gain and quite a bit to lose, Colette Avital’s willingness to speak out on the most delicate of matters is inordinately gutsy. Her courage is not only an important corrective to the widespread tendency to degrade women and discount their substantial contribution to the building of the vibrant mosaic that is Israel, it also sheds light on the need to rethink the consequences of these actions and to find ways to revise them in order to pave the way for a more equitable future. For that — and for all she has done — she deserves our lasting gratitude.