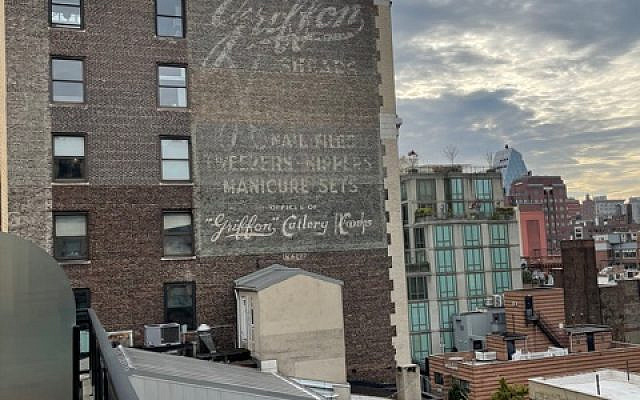 The view from a Chelsea, New York balcony. Taken by Penny Cagan, November 2020, with permission.

“Whichever way you look at it, there is a difficulty.”

What a journey it has been since we started reading about alleyways and courtyards and crossbeams and signposts back in August. I wish I could believe the Talmud when it tells us over and over that “it is not difficult.” I read diligently each day in order to find just one thing that I could grasp onto and find meaning. There were many days when I was on the verge of giving up but would find that one thing in the last paragraph of the day’s text.

What has resonated most with me is the sense of community and shared responsibility, that has been apparent through all the permutations of establishing and upholding an eruv. The message has been from the beginning of this Tractate that we are in this together as we wade through extremely difficult times.

The measure of four handbreadths took on a great deal of significance during this Tractate. It was often cited as the gage that was used to determine legitimacy or illegitimacy of an action or an object. Bread became important as the food that is most frequently, but we were told not solely, used to create an eruv. A loaf of bread became the symbol of neighbors coming together in the formation of an eruv and a crusty reminder of how conjoined we all are.

There were many days of discussion of Rabbinic and Torah law and by extension, lenient and stringent rulings. We have been told from the beginning of the first book we read that Rabbinic law was created as the guardrail around Torah Law and as a result, could be open to more lenient interpretation. The entire concept of an eruv is a leniency in and of itself, because it consists of elaborate workarounds that allow people to travel a greater distance than four handbreadths from their homes on Shabbat and to carry in the surrounding courtyards and alleyways.

Rav and Shmuel appeared throughout the Tractate arguing their respective positions. This included intense discussions on whether one can renounce his courtyard rights to another for the sake of the creating an eruv.  In several places, these two great sages were inconsistent in their rulings, which served as a reminder that even the great among us can at times view the same issue through a different lens and come to an entirely new conclusion. We were reminded to not accept things on the surface and to dig until we understand an issue’s many nuances.

There were many lessons on this Tractate that were relevant to the fractured political climate we have been navigating through during the US presidential elections. The importance of crossing political, personal, racial and religious divides in order to understand divergent perspectives and points of view is one of the quintessential lessons gleaned from the Talmud, because the Rabbis always have another opinion. And for every opinion there is another one and even another one.

Women are few and far between in the pages of the Talmud, and even fewer have names. We were introduced to Berurya, the wife of Rabbi Meir, who appeared as strident and self-assured as Yalta who first materialized back in the Berakhot Tractate, which seems like a lifetime ago. In an example of another strong women, we were told that Michal, daughter of King Saul, would don phylacteries and “the Sages did not protest against her behavior, as she was permitted to do so.”

We met Leah, who was self-assured and had both a name and a voice; she demonstrated that even during times of the Talmud, a brave woman could speak up and be clear and honest about her needs. But sadly, she was not the norm and one parochial Rabbi suggested that it was better for a woman to be modest and not speak out so openly.

There was a small victory for women buried in the discussion of what constitutes a person’s place of dwelling and a reference to “each woman” who is “significant in her own right.” This is a bold statement that is attributed to Rabbi Yehuda ben Bava, and it acknowledges the silent wives and daughters. It is a small victory after all because it is in reference to a discussion on establishing eruvs.

This entire Tractate had me thinking about private and public spaces. This is never truer than during a time when New York City was emerging from a total lockdown and I was living primarily in my private space. We create private spaces wherever we are in the world and now more than ever. It might be through the drawing shut of our window blinds or pulling into ourselves when riding in a crowded subway car (although because of the coronavirus, I cannot envision ever getting on a subway again.) We find safety – whether real or illusory – through the marking of space.

Through the diligent reading of this difficult Tractate, all of us have marked our space in the tradition of Jewish learning. It is a huge accomplishment to have come this far. Each of us has brought our unique perspective and an original view of the world to the endeavor and have added on layers of meaning and interpretation to the grand story of the Talmud. And we have tapped the creative spark within us that makes us truly unique and human.

It is time for the promise of a new Tractate, the opening of a new book, and a new chapter. And through the effort we will make the darkness of the winter that is to come bearable.

I have included a photo of the view from my balcony, which served as a reference to all the discussions on dividing walls, rooftops, and private and public spaces.