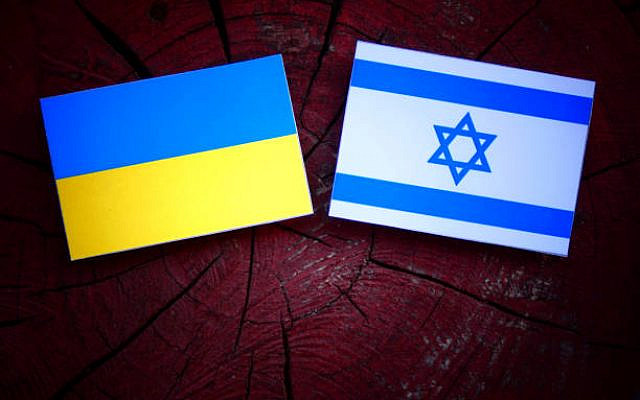 As the world witnesses the horrors of the Russian invasion of Ukraine and bands together in response, Palestinian advocates are tossing around false, dangerous comparisons between Palestinians and Ukrainians – trying to take advantage of the world’s sympathy for Ukraine by inserting a radical distortion of history that has only one purpose: to undermine Israel. While our hearts go out to all innocent people affected by conflict and violence everywhere, including Palestinians, there is no similarity between the situations in Ukraine and for the Palestinian people.

Palestinian advocates complain that while the world is mobilizing against the Russian invasion by imposing massive sanctions, the Palestinian effort to isolate Israel – diplomatically and through boycotts and sanctions – has failed to receive the same level of support. Why, they ask, doesn’t the world react to Israeli actions the way it is responding to Russian attacks on Ukraine? Put simply, it’s because the two aren’t in the least bit comparable, neither today nor historically.

Ukraine – a sovereign, democratic country – was invaded by Russia, the world’s largest country led by an authoritarian autocrat with visions of restoring the lost Russian empire. The attack was completely unprovoked. The same cannot be said of the situation of Israelis and Palestinians.

Prior to the Russian invasion, Ukraine had not encouraged terrorist attacks against Russian civilians; had not launched thousands of rockets on Russian cities; had not used humanitarian aid to build tunnels designed to attack Russia and kidnap its civilians and soldiers; was not holding Russians hostage; and had not declared that Russia was illegitimate and had no right to exist. You get the idea.

Yet the Palestinians have done each of these things against Israel and its citizens, continuing a tradition of using violence to achieve its political goals. Over many decades, Palestinians have launched attacks on Israel, from within and outside its borders, to terrorize, kill, and maim as many Jews as possible. This didn’t start yesterday or even this century.

Today, Hamas, a terror organization, runs the Gaza Strip and uses it as a base of operations to attack Israel. Repeatedly, Hamas operates out of civilian areas with no regard to their own people’s safety, and launches attacks to force an Israeli military response.  When Israel defends itself, Hamas and its allies launch a crusade against Israeli “aggression.”  Yet as soon as the rockets stop, so does the Israeli response. Let’s remember, Israel left Gaza and does not want to return.

Israel has of course defended itself, but even those who may question Israel’s tactics must concede that the Israeli responses are not unprovoked. Context matters. The comparison with Ukraine falls completely flat.

Historically, the attempted comparison is also false. Unlike Russia invading Ukraine, Jews never invaded Palestine. While a small Jewish community survived in Palestine, or the Land of Israel as Jews call it, since the time of the Roman overthrow of Judea, Jews began to migrate in larger numbers to the region of Palestine in the late 19th century, then a province of the Ottoman Empire. There was no Arab state of Palestine then nor at any other time in world history.

The Jewish migrants were idealistic refugees of anti-Jewish persecution in Europe, not an invading army.  They were joined later by Holocaust survivors and Jewish refugees from Arab lands which had begun to persecute and even expel Jews. Jews bought land legally, built communities and established the tools of democratic self-governance. They organized units of self-defense as they found themselves attacked by bandits and then mobs spurred on by Arab demagogues. They waged a diplomatic effort, ultimately successful, to gain international recognition of their historic rights and the justice of their cause.

So how do Palestinian advocates even make the comparison with what Ukraine is experiencing? They are thinking about the Palestinian national narrative which is founded on the idea that the Jews invaded “historic Arab Palestine” as European colonialists, stole the land, and have occupied Palestine unjustifiably ever since. Not every Palestinian claim against Israel is without merit, but this one is.

To even begin to make the comparison, you’d have to forget about Jewish history, for starters, and also the Treaty of San Remo, the repeated Arab rejection of peace offers, including a two-state solution in 1937, the partition plan adopted by the UN in 1947, the Arab rejection of “land for peace” following the Six Day War, and peace proposals made at Camp David in 2000.  You’d also have to ignore the persistent, organized Palestinian Arab attacks on Jews beginning in 1921, the launch of a civil war by Palestinians in 1947 designed to prevent Israel’s birth, the invasion by multiple Arab armies after Israel declared its independence in 1948, and the unrelenting series of attacks and acts of terrorism that continue to this day. That’s a lot to forget.

If anything, the Arab attacks on Israel are historically more akin to Russia’s attack on Ukraine than the other way around. The despotic leader of Russia’s sham-democracy is illegally invading a vibrant, democratic and sovereign nation, refusing to acknowledge its legitimacy and seeding misinformation and lies to its citizens and the world. In 1948, 1967 and 1973, authoritarian led Arab armies banded together to attack a much smaller Israel with the goal of snuffing out the young democratic nation. Just as Russia argues that Ukraine has no right to exist and by right is part of the Russian state, Arabs have long argued that Jews had no right to a state and certainly not on land they considered part of the Arab world. Then as now, the Arab world dwarfs a relatively tiny Israel, far more so than Russia does Ukraine.  Just as Russia seeks to reverse democratic Ukranian independence, so too the Arab states sought to reverse democratic Israel’s independence.

Fortunately, today a growing number of Arab states have reversed these historical positions, opting instead for peace and trade, but not the Palestinians.  They, instead, continue to perpetuate a historical narrative that paints Jews as the villainous aggressors and them as the unwitting innocent victims. The actual history is different, and certainly more nuanced. The Russian invasion of Ukraine is not.