The Blogs
Meir Charash
Ride Through
Apply for a Blog
Advertisement
Please note that the posts on The Blogs are contributed by third parties. The opinions, facts and any media content in them are presented solely by the authors, and neither The Times of Israel nor its partners assume any responsibility for them. Please contact us in case of abuse. In case of abuse,
Report this post. 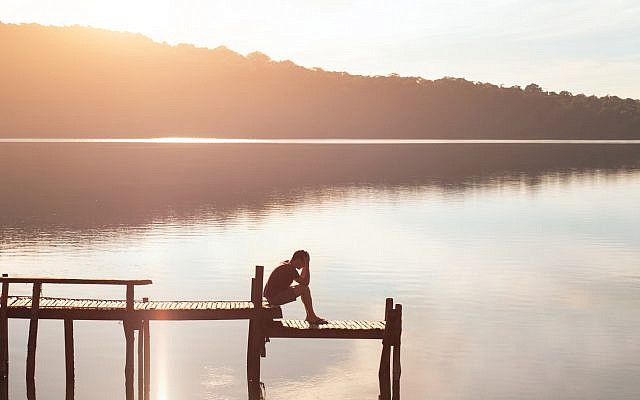 My therapist of the last year and a half since my son Ariel z” l died by suicide, suggested that I do something creative for our last session. My wife and three children are very creative — I, on the other hand, ride a mountain bike, exercise and drink scotch. That was until the death of my son. Then, my outlet for my pain, bewilderment, anger, loss, longing and love became writing. Creative? Not really — just a form of self-therapy and an attempt to bring to light the issues of suicide, mourning, self-preservation and a will to live life to the fullest, no matter the ongoing pain and angst that I carry in the proverbial backpack on my back and in my heart.

I’m not creating; rather I’m mourning the loss of my son. How do I bring closure when there is no closure? How do I ‘end,’ when there is no ending? When I was in individual therapy some 25 years ago, I ended it with a sense that, despite the negative voice inside my head, I could move forward and better accept myself. My therapist challenged me to design a “new business card” and lo and behold, I did. From Federation professional to social work educator to fitness trainer and Thai Massage therapist — I have changed, grown and come to feel better about myself. While I certainly have my moments of self- critique and doubt, overall, I’m okay. More than okay — I’m calmer and happier than I was 25 years ago. The therapy worked.

When my wife and I moved from parental counselling about how to cope with Ariel z”l’s depression, to full-fledged marital therapy, there was a feeling that despite the therapist’s penchant for over analyzing, something positive was happening. Now, years later, despite the normal ups and downs of any marriage, I can see that this was true — I and the marriage is good. The statistics indicate that 75 percent of parents who have lost children end up getting divorced. Through our pain, my wife and I have become closer — the therapy worked.

But, the current ending process feels so very different than the previous endings, as no therapy is going to bring my son back. Yes, I know, that’s not the goal of trauma therapy. Some of the issues I’ve worked on in therapy are learning how to cope; learning how to integrate my conflictual feelings of sadness and anger; love and loss, bewilderment and guilt. I’ve also learned to accept that while I helped communities, social work students and fitness clients, somethings simply can’t be fixed. I’ve worked hard at accepting my inability to help Ariel z”l and, concomitantly, to accept my son’s decision to end his pain.

I’ve learned to talk about suicide in a way that neither stigmatizes the act; nor elevates or romanticizes it. I have cried more in the past year and a half than I have ever cried in my entire life. This has not come easily for me, as it doesn’t fit my self-perceived persona as a strong person. Ariel z”l cried. I tried to hug him, but it was only a half-hearted attempt because the intensity of his tears terrified me. I tried to hug Ariel z”l with more earnestness the last two years when he lived with us, but he didn’t let me in. I only wish that I would have tried harder and earlier on in the process of his depression.

I know people mean when well when they say, ‘don’t feel guilty; you were a good father.’ But until you have lost a child to suicide, one really has no idea about the power of guilt. At a recent meeting of my support group (B’shvil HaHaim), geared for parents who have lost children to suicide, I lamented that it says in the Talmud that a father needs to teach his son how to swim — I didn’t; I feel like I failed. One person looked at me and said, ‘We all feel that in some way that we failed.” Everyone in the room without exception quietly nodded their heads.  Some people might feel the need to tell me otherwise. But, it is more helpful just to listen and then hold and hug me. In fact, this is my best advice for friends who wish to provide support to anybody coping with trauma.

Trauma therapy is like no other therapy. It does work; but the ending is so radically different. Despite the tears, guilt, loss and searing pain, during the past year and a half, I have not wallowed in my grief, have not sunk into depression; nor have I given up in any way my determination to enjoy the blessings of life. Therapy works. For that, I thank my amazing therapist who with utmost sensitivity would never ask me a question without first asking, “Is it tolerable.” She helped me move forward and sense lightness even when the constriction in my heart was, at times, suffocating. She cared; she listened, she was present for me at all times. I am also filled with gratitude for my family, friends, the support group at B’shvil HaHaim and especially the Facebook Community who became another type of support group the last year and a half.

Trauma therapy is different and my “ending therapy assignment,” does not lead to any happy endings that conclude with only utterances of gratitude and platitudes. There is less optimism and more pain. The sense of achievement is less than previous therapies, while the somber acknowledgment of the ongoing ache in my heart is profound. On my weekly visits to my son I end each visit by lying on my back and gazing up at the clouds yearning for the impossible — a chance to simply say goodbye. To hold him one more time. Instead, I say I love you; I miss you, I’m still angry, but I’m trying hard to accept your decision to end your pain. I place yet another rock on his grave and then slowly walk away and wash my hands according to Jewish tradition — cleansing myself and choosing life over death.

The therapy ends this week and I’m okay — but the process of grief continues. This ending is different. It has no end; it has no closure for I carry the backpack of loss on my back forever.

Ariel z”l, my son, I love you and miss you terribly. May your memory be a blessing.

About the Author
Meir Charash, originally from Fair Lawn New Jersey, made Aliyah to Israel 40 years ago. In 1979, Meir acquired a B.S. in Business Management, majoring in organizational management, from Boston University and a MSW in 1984 in Group and Community Work from the Wurzweiler School of Social Work (WSSW) at Yeshiva University. Meir worked as a community worker in Beit Shemesh and in Jerusalem, was the Director of the Israel Office of the Jewish Federation of Greater Philadelphia for 19 years providing fiduciary oversight to donor funds and facilitating Israel – Diaspora relations. Meir’s expertise is in the area of community building, fundraising and organizational behavior. In addition to supervising Wurzweiler social students, Meir worked as Faculty Advisor and Coordinator of the Israel Block Program from 2010 to 2017. Meir is married with three children and resides in Armon HaNatziv, Jerusalem. He is a certified fitness trainer, Thai massage therapist and an avid mountain bike rider having participated for nine years in the Alyn Charity Bike Ride for the Children of the Alyn Rehabilitation Hospital and in two races, the “Epic,” and “Sovev Arava”. Meir served in the armored forces for a year and a half and 15 years in reserve duty.
Related Topics
Related Posts
Comments