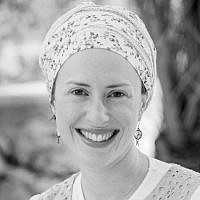 The Blogs
Atara Eis
Apply for a Blog
Advertisement
Please note that the posts on The Blogs are contributed by third parties. The opinions, facts and any media content in them are presented solely by the authors, and neither The Times of Israel nor its partners assume any responsibility for them. Please contact us in case of abuse. In case of abuse,
Report this post.

The discovery of acts of voyeurism allegedly committed by a prominent Orthodox Rabbi in a community mikveh is a betrayal that threatens trust both in the safety of a sacred Mitzvah and the integrity of the Rabbinate. By law, the Rabbi is innocent until proven guilty, but I think we are all in shock at the spectre of one man’s unchecked perversion and abuse, and its power to tarnish a profession dedicated to guiding others to lead inspired lives of justice, respect, truth and meaning. We ache for the women and men who have been directly impacted by this alleged abuse. The safe, confidential space which most symbolizes new beginnings has been sullied and defiled. A holy, healthy, private space has been compromised and perverted. The core Jewish value of taking care of the vulnerable amongst us has been damaged. Everything mikveh represents has been flipped on its head.

I grieve as a human being, for the Rabbinic world in which I live and breathe. I grieve for the Mesorah, which has been abused and misrepresented, as my colleagues and I prepare with grim determination for the hard work we religious leaders must do to restore the trust in, and love of, the Torah’s age-old wisdom. I grieve as a Yoetzet Halacha, whose job is to educate women to love this mitzvah, to love Halacha, and to carve out a woman’s place in Jewish learning and leadership specifically through the ancient mikveh waters. I grieve for our community, which has taken yet another hit from a leader who has allegedly undermined its most fundamental values. How can we restore the trust that has just been shattered? We must combat these abuses on two fronts: by increasing the involvement and acceptance of Yoatzot Halacha and by creating ongoing oversight and professional support for clergy.

Welcoming women to halachic leadership will shift the entire power dynamic of Orthodox Jewish life. While adding women will not entirely guarantee that there will never be corruption or abuse of power, providing alternative viewpoints and thoughtful scholarship will minimize the kind of abuse with which we are now being forced to deal, and will increase overall respect for women. Then, we might be able to strike an even better balance in terms of gender relations than our host cultures which see no distinction between men and women and are just as plagued, if not more, by abuse. Over the last fifteen years, Nishmat has certified over eighty five Yoatzot Halacha- female halachic advisors rigorously trained in all areas of Taharat HaMishpacha- who are uniquely positioned and qualified to support this restoration by providing a level of oversight that might diminish opportunities for anyone in a position of power to prey on someone more vulnerable and less knowledgeable. Nine of these women live in North America and are already serving in twenty seven institutions. Seven more will graduate from Nishmat’s Miriam Glaubach Center’s U.S. Program this summer. This crisis has opened Orthodoxy to the stinging challenge of misogyny; welcoming Yoatzot Halacha at this time will say louder than anything else that women are respected and valued by Orthodoxy.

Yoatzot Halacha respect and embrace the slow process of halachic change and have not expected our acceptance to come overnight. Still, after seeing the impact we made in just fifteen years of serving communities in Israel, North America and England, over forty well-respected mainstream Orthodox American Rabbis joined our honorary Rabbinic committee for the graduation of our first five American-educated Yoatzot Halacha last year. American Yoatzot Halacha answered well over five thousand questions last year alone. We seek not to undermine Halacha but rather to uphold it and help as many people as possible live Torah lives with dignity and self-confidence. Women: please speak with your Rabbis- encourage them to hire a Yoetzet Halacha to provide you with the resource you deserve. Rabbis: please accept our voice and presence in the halachic dialogue and practice. Taking this stand, which for some of you may feel nothing short of courageous, is an act of responsibility on behalf of healing our fractured community.

Our Rabbinical schools should also take this moment to make significant strides in improving ongoing leadership support, ethics training, and oversight during a Rabbi’s entire career, not just when they are in the walls of the yeshiva. Doctors and lawyers are expected to take continuing education courses every year to maintain certification; Rabbis should expect the same requirements. We must ensure that they are safe to work with our congregants and worthy to represent Torah. These are the standards in other professions, and Rabbis are not above those standards; Rabbis arguably should be held to a higher standard. Just because Torah study should make us automatically more ethical and Rabbis themselves teach ethics, doesn’t mean they are immune to the moral failings embedded in the human condition. If implementing rigorous mechanisms will identify even one dangerous leader and add a few more checks to the system, they are justified. We need to do more to prevent the wrong people from achieving religious leadership, and to help leaders who are otherwise talented and worthy representatives of the Mesorah to control their evil inclinations and manage their egos. The last few decades have exposed too many charismatic Rabbis’ horrifying abuses of power far too late in the game. We need to nurture a culture of collaboration and constructive feedback between congregants and leaders, and minimize the kind of defensiveness that characterizes so many of these relationships on both sides. Ongoing leadership support would ideally also have confidential support systems to help Rabbis deal with their own personal failings and get help in dealing with their problems before they hurt themselves and others.

I am not, G-d forbid, claiming that everyone charismatic is at risk of criminal activity, abuse, or personality disorder, but we owe it to the Torah and to our congregants to be vigilant. Hopefully, the main goal of continuing leadership education shouldn’t be to weed out the unworthy but rather to help the noble, humble individuals who have chosen Torah teaching as their profession to improve their craft. When a young, promising, particularly charismatic educator is identified, it is his or her institutions’ responsibilities- both where they were certified and where they work- to identify that charisma and proactively keep that educator in check to make sure he understands the power of his personality.

We should not have had to wait for a crisis to break in order to reform our procedures and raise our standards of leadership. But now that a crisis is upon us and serious institutional weaknesses have been exposed, we can transform this crisis into an opportunity. Within the scope of wider institutional change, the increased acceptance, visibility and activity of Yoatzot Halacha will go far in restoring our community’s faith in the Rabbinate.

About the Author
Yoetzet Halacha Atara Eis is the Director of Nishmat’s Miriam Glaubach Center and the U.S. Yoatzot Halacha Fellows Program.
Comments