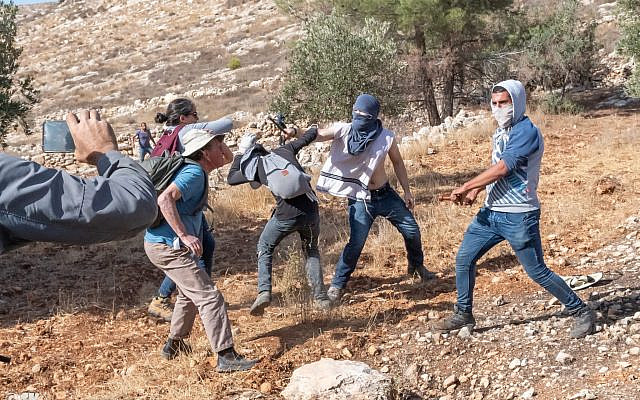 We are attacked on Tzurif's lands underneath the Bat Ayin Settlement Credit: Shai Kendler

Thursday night, there was another terrible terror attack.  My condolences to Yehuda Dimentman’s family, and prayers for the speedy recovery of those who were lightly injured. The fact that Yehuda was studying in a Yeshiva in an outpost illegal even according to Israeli law, let alone international law, in no way justifies murder.

The condemnation of Palestinian terror crosses all political lines among Israeli Jews, and many Israeli Arabs (Israeli Palestinians). I of course wish there would be wall to wall rejection of violence. However, criticism of settler terror has become political football.  Nothing should surprise me anymore, but I have been flabbergasted and dismayed to hear settlers and their supporters crying foul over condemnations .  I know the father of Wael Moqbel, the Palestinian who was hospitalized after he was attacked and his home was trashed in an apparent revenge attack. His village of Qariyut is well over an hour’s drive away from the scene of the murder. I would hope that we would hear wall to wall condemnations and wishes for a speedy recovery. I doubt that we will.

I can only point out for the third year in a row that in this final portion in the book of Genesis, Jacob again roundly condemns the violence of his sons Simeon and Levi. All too many in our society lack Jacob’s moral compass. No doubt Wael’s attakers justified their violence as the necessary response, just as Simeon and Levi justify mass murder because of the rape of Dina.

Also on Thursday night, I participated in a television panel on settler violence with Josh Hasten, the international spokesperson for the Gush Etzion settlement block.  I realized afterwards that we didn’t even get to all of the violent attacks I have personally suffered this year, because we were stuck on the question of Josh’s contention that most settlers and their supporters oppose violence.

We agreed that there is a small percentage of settlers who directly engage in physical violence. I gave credit to Rabbi Avi Gisar, formerly the rabbi of the Ofra settlement, who has publicly and clearly condemned settler violence. However, I also made it clear that few speak out in the same way. Maybe others are working more quietly to counter the violence in their ranks, and that is also important. However, there must be many more public voices.  Josh said in a very general way that he opposes violence. I said he will be listened to more than I among those acting violently, and therefore he is obligated to speak out.  I would like to hear more settler supporters acknowledging that only a small percentage of Palestinians engage in terror…

I wrote after being attacked by a knife wielding settler in 2015 that the people who put violent ideas in his head should have been on trial, along with all those who turn their heads. I warned after a group of us were injured standing between hilltop youth and Palestinian shepherds in 2017 that the hilltop youth may be the face of who we are becoming.  Today, even the condemnations of the so called hilltop youth by settler supporters are fewer and farther between. Media outlets supporting the settlement movement often quote those who praise the dedication of the violent settlers to the Land of Israel. They are frequently portrayed as sweet youth, even if some acknowledge that they may have quibbles with some of their actions.  In 2012 youth from Bat Ayin were suspected of having thrown a Molotov cocktail into a Palestinian taxi, severely injuring 6 passengers. While they were not prosecuted because of a supposed lack of sufficient evidence, the rabbi of Bat Ayin at the time placed a letter in the mailboxes of all of Bat Ayin’s residents, calling for reflection and t’shuvah (repentance). He was roundly condemned. This is the same Bat Ayin underneath which Netta Ben Porat, Gil Hamerschlag and I were injured by a horde of settlers on November 12.

Of course, the entire settler movement is based on state violence that allows Jews to unilaterally dispossess the disenfranchised Palestinians who cannot vote for the Knesset, while refusing to accept the limits on national sovereignty that international law mandates as an alternative form of protection of basic rights.   However, Palestinians and human rights defenders regularly experience violence of the more direct kind.

Jacob blesses most of his children before his death. However, of Simeon and Levi he says:

“Simeon and Levi are a pair; Their weapons are tools of lawlessness.

Let not my person be included in their council, Let not my being be counted in their assembly. For when angry they slay men, And when pleased they maim oxen.

Cursed be their anger so fierce, And their wrath so relentless. I will divide them in Jacob, Scatter them in Israel.”(Genesis 49: 5 to 7)

I extensively reviewed the classic commentators two years ago. However, two additional commentaries: Rabbi Shimshon Rafael Hirsch says that the meaning of Jacob’s words is that the way of Simeon and Levy brings upon us national disgrace and endangers the Jewish people.  They are disingenuous, even constructive criticism is useless, and it is critical for the wellbeing of the Jewish people that they be separated from any positions of influence. My final comment last night was that I don’t want to get into the game of who is the victim and whose deeds are worse.  Settler violence doesn’t reflect OUR VALUES.

Ibn Ezra takes a more hopeful tack. Going one step further than Rashi, who says “CURSED BE TIIEIR ANGER – Even when he was reproving them he did not curse them but their anger,” Ibn Ezra argues that the curse is a blessing that their anger should be reduced: “CURSED BE THEIR ANGER, FOR IT WAS FIERCE. Jacob either prophesied or offered a prayer that Simeon and Levi’s anger would (or should) diminish and that this would be for their very own good. For curse is the opposite of bless, and as a blessing means an increase, so a curse means a diminution.”

We must never forget that settler violence, no less that the violence of Simeon and Levi, is a tool. In our case it is a tool of oppression, designed to dispossess Palestinians. While the primary victims are Palestinians, it disgraces and ultimately endangers us.” While it is a handful that are the most violent, their violence serves goals shared by many. Those who engage in or support settler violence must be separated from all positions of power and influence.  However, ultimately we must seek to bless those who practice or support this violence by finding the way to end both their violent tendencies and help them to divorce themselves from the aspirations the violence currently serves.