The streets round here have been ringing with the sound of people saying “no” – and, a little like the mighty and laminated Peter Finch in the film Network, we Jews are mad as hell and aren’t going to take this any more.

Exhibit one, the supremely self-satisfied Mary Hassell, senior coroner for four boroughs in north London, who almost literally has the power of life and death over the Jewish and Muslim communities unfortunate enough to have to deal with her.

Hassell’s stock-in-trade is saying “no” to distraught families who want to bury their relatives according to religious teaching – that is, as soon as possible and, in the Jewish tradition, after the body is watched over, the process known as shemirah.

It takes a lot for the strictly-Orthodox to make common cause with mainstream representative communal bodies, but as regards Mary Hassell, the Adath Yisroel Burial Society and the Board of Deputies are of one mind. The coroner’s insistence on the “cab-rank” system wherein one burial does not take “priority” over another, has proved too much for both groups, which went to talk to Hassell last week.

But even the highly emollient Marie van der Zyl, vice-president of the Board – and it surely speaks volumes for the seriousness of the issue that the Adath was prepared to confront Hassell together with a woman, but hooray for that – could only conclude that the meeting was “deeply disappointing”.

Hassell has refused to budge and, accordingly, our community has called for her removal as she is making religious burial a bureaucratic nightmare for many people. It’s not so easy to remove a coroner, as is being discovered, but it is surely right that Hassell’s rule should be terminated.

At least one member of the community – who I will identify in a moment – has praised van der Zyl for “tremendous leadership” in the Hassell affair, but frankly she and the Board could scarcely do other in the circumstances. There comes a point when talking behind the scenes in the hope of resolving an issue simply doesn’t work – not least when all too often the person or organisation at the heart of the dispute is relying on the fact that Jews don’t want to make waves.

Now, the member of the community in
question? He is Councillor Jeremy Newmark, leader of the Jewish Labour Movement (JLM) and a serial behind-the-scenes organiser, often to good purpose. This time, however, I feel he has come unstuck because the second grouping appearing to say “no” is Cllr Newmark’s own Labour Party and its endless inability to deal with anti-Semitism.

I don’t know about you, but I am mightily sick of seeing Jeremy Corbyn mouth on about “zero tolerance” and then precisely nothing happening when it comes to the Ken Livingstones, Jackie Walkers and Marc Wadsworths of Labour, to say little of the scores more offenders clogging up Labour’s files and committees.

Last week’s almost wholesale takeover of Labour by its core activist group, Momentum, appeared to seal Jewish hopes completely. For all the behind-the-scenes negotiating, the promises made at Labour’s annual conference in September look hollow.

It is time, Cllr Newmark, with all the good will in the world, for Jews to make waves.

JLM – and the rest of the community for that matter – should stop shushkying into their sleeves and go for some intelligent confrontation. Then perhaps, for a change, we will hear the word “yes”. 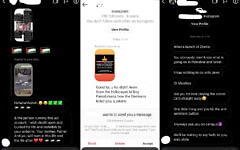