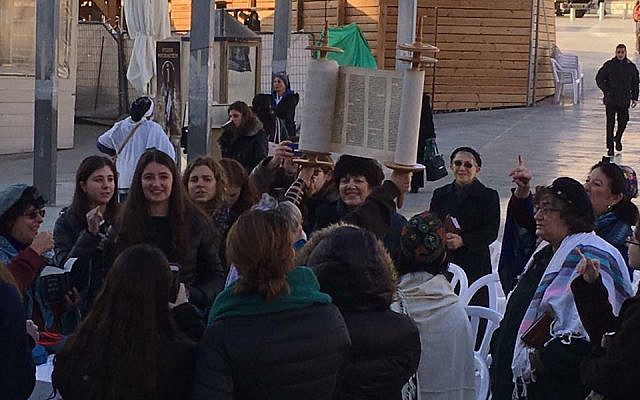 The Labor Party under its new leader, MK Merav Michaeli, is rising from the threatened oblivion to which its previous two leaders brought it and is now predicted not only to pass the electoral threshold but possibly to get more than the four minimum seats that standard requires.

For you, Rabbi Kariv, having placed number four in yesterday’s primary, this is sweet victory. It is historic for Reform Jews and for the Israeli Reform movement you have headed, for the Labor party, for Israel, and for Israel-Diaspora relations.

You and I have met many times over the years as the right of Jewish women to exercise the same prayer options open to Jewish men at the Kotel since 1967 has been argued before the Supreme Court. That right has actually long been recognized, as the Court ruled, way back in 2003. A decade later, in 2013, then the 25th year of women’s group prayer at the Kotel, a District Court in Jerusalem also recognized such prayer as “minhag hamakom,” a “custom of the place,” dismissing outrageous claims that such prayer “disturbs the peace” or makes it “impossible” for “worshippers”—meaning, the ultra-Orthodox, as if women at prayer are not worshippers—to go about their own business at the Kotel. Yet another judge dismissed the argument that the ultra-Orthodox simply cannot control themselves, or their violence, when Jewish women don prayer shawls or tefillin and read from the Torah, saying, “that is like blaming women for rape.”

About all the above, I know that you and I agree.

Where we differ is about what your movement, together with the Masorti movement and the Women of the Wall organization (WOW), did in 2017.

In what became known as the “Kotel deal,” you and these colleagues negotiated to trade the hard-won rights of Jewish women at the Kotel for State recognition and funding of your movements at Robinson’s Arch, at the southern end of the Western Wall, long the site of egalitarian prayer. Those rights, achieved in decades of struggle, early morning rising in cold, heat, wind, and rain and, at times, of Haredi violence and police detention, which I, too, experienced, for the “crime” of donning a prayer shawl, as I have done at prayer for most of my life – are not the possession of any one group of women, but of all Jewish women. We never gave our consent for our hard-won rights to be appropriated and used as currency with which to attain other goals; the doing of which, indeed, was very much against our will, which position we made amply known, at the time and since.

The Kotel deal has been peddled as a victory for liberal, progressive policy, but it was anything but. The Haredi rabbinical administrator of the Kotel negotiated and agreed to that deal. People really need to ask themselves why a Haredi rabbi in a highly sensitive, prominent political position, would ever agree to State recognition and funding of movements his camp regularly characterizes as “the work of Satan.”

The selling of the Kotel deal, with a Diaspora audience heavily in mind, omitted mention of critical aspects of the deal. The Kotel’s legal status is “atar le’umi kadosh”: “national holy site” of the Jewish people. It tops a list of such sites, including the Tomb of Patriarchs and Matriarchs in Hebron; Rachel’s Tomb; the tomb of Rabbi Shimon bar Yohai. The Kotel is not a synagogue, “belonging” to anyone or to any segment of the Jewish people. It, therefore, does not have a “rabbi,” however much occupants of that office appropriate that title and attempt to act as mara de’atra, a rabbinical authority deciding correct practice. What the Kotel does have is an appointed “rabbinical administrator,” whose job is to facilitate, not restrict access to the holy site, much less to impose religious conditions on those who come there, never mind, order their arrest.

The Kotel deal would have changed all that. In exchange for turning Robinson’s Arch into a synagogue under the formal and State-funded auspices of the Reform and Masorti movements, the status of the Kotel was also to be changed: it would become a synagogue under Haredi auspices, with a rabbi who could, indeed, decide and impose practice there. That is why the rabbinical administrator of the Kotel—and the entire Haredi political establishment, which knew exactly what the deal entailed—signed on to it. Until certain other religious elements, vehemently opposed to the deal and all those behind it, informed the Haredi street about its contents and uproar ensued. At which point, the Haredi parties threatened to quit Benjamin Netanyahu’s coalition and Netanyahu abandoned the deal he had sought and announced with fanfare.

Also omitted from mention in the selling of the Kotel deal is the fact that, under its terms, women’s group prayer at the Kotel was to be made a criminal act, punishable by heavy fines and long prison terms. Criminalized.

But this is not even the extent of the mistake all this was—and still could be.

The Kotel deal would have turned the entire Kotel plaza into a scene of sparring movements; as WOW leader, Anat Hoffman, put it, “let the best movement win.” As if what we need is a Jewish version of the Holy Sepulchre, with its turf battles between Christian denominations.

What we need at the Kotel, the “national holy site” of the Jewish people, of us all—  precisely, is less, not more, denominationalism. We need the place restored to its primacy as the site of sacred Jewish memory, connection, vision, and hope that we all share. Including, I would note, secular Jews, omitted entirely from the Kotel deal’s considerations. Jews who used to relate to the place fervently, its national significance self-evident; Jews who sacrificed life and limb as soldiers to return it to Jewish hands in 1967—and who now avoid it, as do many religious Jews—in disgust at the de facto Haredi shrine the authorities have allowed it to become. Which status the Kotel deal would make de jure.

The Kotel deal would have enhanced and expanded Haredi establishment power immensely: that is why that establishment signed on to it. This is the last thing Israel needs, as has become even more painfully evident in the era of corona than it was already. Collusion with this power, for whatever tradeoffs, is extremely short-sighted and misguided. There are healthy ways to pursue rights to religious expression. Healthy not just for one group or movement but for all Israel, by which I mean Israeli and Diaspora Jews alike.

So, Rabbi Kariv: congratulations on your triumph and good wishes for the hard work ahead. But please, when you are in the Knesset: do not sell us out—“us” here meaning not just Jewish women but all Israeli and Diaspora Jews who love Israel; who wish to see many paths of Torah thrive and Israeli constitutional democracy strengthened– and Haredi theocracy and theocratic ambitions, not Jewish women at group prayer—arrested.

About the Author
Shulamit S. Magnus is a professor of Jewish history, author of four books and numerous articles on Jewish modernity and the history of Jewish women, and winner of a National Jewish Book award and other prizes. Her opinions have been published in the Forward, Tablet, EJewish Philanthropy, Moment, and the Jerusalem Post. She is a founder of women's group prayer at the Kotel and read Torah there in the first such tefilla, in Dec., 1988. She is first-named plaintiff in a suit currently before the Supreme Court of Israel asking the Court to enforce its own rulings about women's prayer rights at the Kotel.
Related Topics
Related Posts
Comments