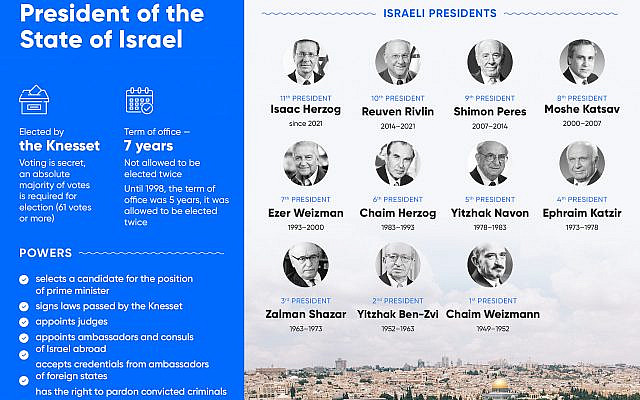 Picture by Jewish Confederation of Ukraine
Yesterday was rich in political reshuffle in Israel. The Knesset elected the 11th President and the end of the 17th Prime Minister’s 12-year period was announced.
For the first time in history, the son of the former President, Isaac Herzog was elected as new President of the State of Israel. His father, Chaim Herzog, was the sixth president and served as “first citizen” from 1983 to 1993. From the first days of his presidency, he made it clear that he was the leader of the entire nation. The same position is shared by his son, who, prior to his election as President, headed the ministries of welfare and social services, housing and construction, tourism, diaspora affairs, and dealt with issues of humanitarian cooperation with Gaza in the Political Security Cabinet. His last position before the presidency was the chairman of the board of the Jewish Agency for Israel “Sochnut”, which is responsible for the repatriation of Jews to Israel. During the three years of Herzog’s heading “Sochnut” Israel received 80,000 immigrants.
Herzog is the grandson of the first Chief Rabbi of Israel, Yitzhak HaLevi Herzog, after whom he received his name. Isaac Herzog’s nickname “Bougie”, as his teacher once called him, also came with him from childhood to politics.
By the way, the practice of giving nicknames to political figures is widespread in Israel. Former Prime Minister Ariel Sharon, for example, was called the “Bulldozer”, and the name of Benjamin Netanyahu in the media is often replaced by the short “Bibi”.
The second loud political news of yesterday is connected with Netanyahu. Shortly before midnight, it became known about the formation of a new coalition in the Knesset without the Netanyahu’s Likud party. The opposition leader Yair Lapid managed to inform President Reuven Rivlin, who remains in office until July 9, the day of the transfer of powers to Isaac Herzog, about the formation of the coalition just a few minutes before the deadline allotted by law.
Congratulations to Israel on the new President. Peace and prosperity!