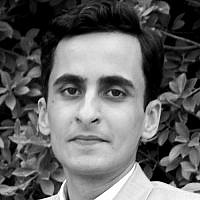 The Blogs
Kashish Parpiani
Fellow, Observer Research Foundation (India)
Apply for a Blog
Please note that the posts on The Blogs are contributed by third parties. The opinions, facts and any media content in them are presented solely by the authors, and neither The Times of Israel nor its partners assume any responsibility for them. Please contact us in case of abuse. In case of abuse,
Report this post. 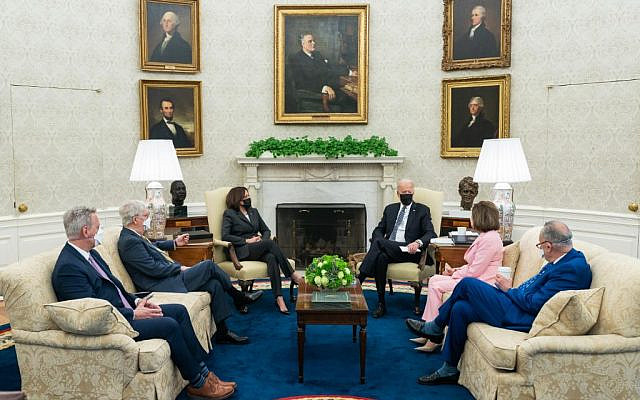 Following an expansion of Congressional role in foreign policy decision-making under Trump, the influence of progressive Democrats over Biden’s agenda bears mixed prospects for India-US ties

Under Donald Trump, the US witnessed a power tussle between the executive and the legislature over foreign policy decision-making. While such a tussle had been in the offing over the post-9/11 consolidation of powers by the executive, bipartisan and bicameral anxieties in the US Congress over Trump’s ‘America First’ approach only accentuated that tension. In guarding core tenets of post-Cold War US foreign policy, Republicans and Democrats passed stop-gap provisions to prevent Trump from downgrading US alliance commitments and even mandated congressional authorisation over the prospect of Trump engaging in military adventurism. Beyond this preservationist focus, following the 2018 midterms—which propelled Democrats to assume control of the House of Representatives—the 116th US Congress shaped Trump’s policy on China’s human rights record through resolutions on Xinjiang, Hong Kong, and Tibet.

Ahead of the 2020 election, increased congressional role in foreign policy was expected to continue under Joe Biden, since he had acknowledged the need to reverse the executive’s consolidation of powers—particularly over US administrations’ misuse of post-9/11 Authorisations for the Use of Military Force (AUMFs). However, unlike the Trump years, which witnessed congressional intervention in foreign policy through legislative efforts to curb executive authority, Biden’s foreign policy is being shaped by intra-party schisms.

Before the 2020 election, progressives in the Democratic Party deemed foreign policy as “an enormous area” for pushing Biden “in a more progressive direction”. In devising its electoral agenda, the Biden campaign also gave into progressives’ push on some issues (like refraining from out-hawking Trump on China), given Biden’s limited ‘room for manoeuvre’ on accommodating progressives on polarising domestic issues. However, post election, the influence of progressives over foreign policy was expected to be limited, in view of centrist Democrats assuming leadership positions in the 117th US Congress.

Despite intra-party clamour for a new generation of leadership, Rep. Nancy Pelosi was elected for her fourth non-consecutive term as Speaker of the House of Representatives, and four-term US Senator, Chuck Schumer  became the Senate Majority Leader. In the 2020 election, instead of expanding their 232-197 House majority of the 116th Congress, Democrats slipped to a 219-211 majority in the 117th Congress. Centrists attributed that loss to the progressive agenda, since many Democrats ran on polarising prescriptions like “defund the police”. Such an assessment helped centrists sustain control of the Democratic caucus. However, the election did not underscore the electorate’s rejection of progressives.

This was apparent with the re-election of the progressive ‘Squad‘—Reps. Ilhan Omar, Alexandria Ocasio-Cortez, Rashida Tlaib, and Ayanna Pressley—who have been at the forefront of the progressive movement amongst young voters. Freshmen progressives like Jamaal Bowman and Cori Bush won, after defeating centrist Democrats and party elites like 16-term Congressman Eliot Engel and 10-term Congressman William Lacy Clay Jr.

As a result, despite the overall Democratic caucus shrinking by a dozen seats, membership to the congressional progressive caucus continued to remain above its pre-2018 ‘Blue Wave’ midterms level—with 93 progressives amongst 219 Democrats in the 117th Congress. Hence, the centrist Democratic leadership has made way for progressives to assume primary membership on important House oversight committees, that hone influence over Biden’s domestic agenda.

On foreign policy, centrists have begun to toe the progressive line. Recently, this was evident amidst progressives calling attention to American complicity in Israeli actions against Palestinians. Prominent pro-Israel centrists (like, Sen. Chris Coons and Rep. Jerry Nadler) spoke out against Israeli police violence and evictions of Palestinians from East Jerusalem. This put pressure on the Biden White House to also craft a balanced position on underscoring support for Israel and also urging it to roll back evictions.

Similarly, Biden’s decision to merely suspend US support for the Saudi Arabia-led offensive in Yemen, spurred progressives to pressure centrists (including some Biden allies on the Hill) to push for more stringent action. This led to the Biden administration acting upon the 2019 Congressional mandate for the Director of National Intelligence to release an assessment on Riyadh’s role in the killing of Jamal Khashoggi.

Following India’s abrogation of Article 370 in August 2019, Engel had issued a joint statement with another centrist Democrat from the US Senate, Sen. Bob Menendez. In their statement, HFAC Chairman Engel and then-Ranking Member of the Senate Foreign Relations Committee (SFRC) Menendez aligned with the Trump administration to not outrightly comment on India’s actions in Kashmir. Engel was also reported to have been involved in stalling progressives’ House resolutions, which were critical of Trump’s ambivalence and New Delhi’s actions.

Subsequently, as discussed, Engel was ousted after being primaried by progressive candidate Jamaal Bowen. The progressive campaign against Engel largely focused on his foreign policy record, that stood in contrast with progressives’ push for US focus on human rights issues as a guiding principle for ties with adversaries and partners alike. Viewed in this context, Sen. Menendez’s (now, Chairman of the SFRC) public letter to Secretary of Defense Lloyd Austin—which urged him to raise the “deteriorating situation of democracy” during his visit to India in March 2021—possibly stemmed from political considerations to avoid his centrist colleague Rep. Engel’s fate.

In addition, Menendez’ letter hinted at limits to New Delhi’s “ability to work with the US on development and procurement of sensitive military technology.” Although Menendez invoked that threat with reference to India’s defence ties with Russia, it came at a time when progressives have been clamouring for conditioning US arms exports as per human rights concerns.

Shortly after Austin’s visit to India, the Biden administration cleared its first arms sale for India, with the Defence Security Cooperation Agency (DSCA) announcing the sale of six P-8I maritime surveillance aircraft. Concurrently, the DSCA also sent a notification on the sale to HFAC and SFRC, as per the Arms Export Control Act (AECA) which permits legislators to raise concerns within 30 days of receiving the notification.

Although that 30-day window has now elapsed in case of the P-8I sale (which renders the Biden administration free to proceed with the sale), the period coincided with increased rancour by progressives to legislatively block Biden’s US $735 million arms sale to Israel over human rights concerns. While the Congressional Research Service notes that the Congress has “never successfully blocked a proposed arms sale by use of a joint resolution of disapproval”, it remains to be seen if progressives seek an expansion of legislative powers on this aspect. For instance, in the 115th and 116th Congress, progressives sought amendments to AECA to align House procedures with the Senate, over legislators in the House also having the right to “force debate on the House floor” if HFAC does not raise concerns over a sale.

However, progressives’ rising influence over Biden’s foreign policy has also proved instrumental in resolving some divergences in India-US ties.

As India grappled with a resurgent wave of the coronavirus pandemic, the Biden administration oversaw a ‘whole of society’ mobilisation of aid from USAID, corporate America, India-centric trade advocacy groups, and even the Indian diaspora. In its support for India, the Biden administration also rolled back its restriction on the export of vaccine raw-materials. However, on Biden’s holdout on India and South Africa’s appeal at the WTO for a temporary waiver of the Trade-Related Aspects of Intellectual Property Rights (TRIPS) for COVID-19 vaccines, progressives lent the required push.

In reviving the intra-party tussle over ‘pro-worker progressivism’ and ‘anti-corporate progressivism’, progressives criticised Biden for prioritising pharmaceutical companies’ profitsby maintaining exclusivity on vaccine production. Despite the Biden administration rationalising its opposition to the waiver under its ‘pro-worker’ agenda to bolster America’s domestic production base, the progressive pushback gathered support from centrists as well. This eventually led to the Biden administration announcing US support for the TRIPS waiver.

Hence, under Biden, India-US ties face mixed prospects with progressives in the Democratic Party seeking a reformist bent to the US Congress’ preservationist role in foreign policy decision-making.

This article was originally published at the Observer Research Foundation

About the Author
Kashish Parpiani is Research Fellow at the Observer Research Foundation (ORF). Based in Mumbai (India), his research interests include US–India ties and US foreign policy in the Indo-Pacific. Beyond ORF, he has been published at the Institute for National Security Studies (Israel), the Centre for Asia and Globalization (Singapore), Deccan Herald (India), the Marine Corps University Press (US), The Hindu (India), and the Rising Powers in Global Governance Project (Turkey). Kashish is also the co-author of the forthcoming book — America and the Indo-Pacific - Trump and Beyond (Routledge, June 2021). He has presented papers at conferences by the Shanghai University, the International Studies Association (ISA), and London School of Economics–IDEAS. Kashish has been quoted across media platforms such as The Wall Street Journal, South China Morning Post, Foreign Policy, Bloomberg, TIME magazine, and Al Jazeera.
Related Topics
Related Posts
Comments
Advertisement