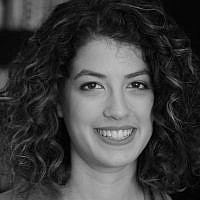 The Blogs
Michal Sherez Shilor
Apply for a Blog
Advertisement
Please note that the posts on The Blogs are contributed by third parties. The opinions, facts and any media content in them are presented solely by the authors, and neither The Times of Israel nor its partners assume any responsibility for them. Please contact us in case of abuse. In case of abuse,
Report this post.

Looking to the future of Jerusalem with the 50th anniversary of the Six Day War now behind us, I would like to suggest a non-political meaning to this oft-quoted verse. Let’s take the word, “l’chaber.” In Hebrew, it means “to connect.”

That connection is what I wish for in the coming days, years and decades – celebrating the essence of Jerusalem’s connectivity. It is not about the military victory. Rather, we seek to connect residents to each other – neighbour to neighbour, community to community, people to people. When we connect to one another, we find common ground, argue about differences and see one another as individuals and not representatives of an entire community.

Some say this is impossible in Jerusalem, home to 850,000 Jews, Muslims, Christians, secular, traditional, ultra-orthodox and many other subgroups, each with different and sometimes vehemently opposing visions for Jerusalem’s future.

I disagree; look at what happens in Jerusalem everyday. Tens of thousands of passengers ride the light rail or the bus, frequent the same malls and supermarkets, attend cultural events, walk the streets to school or work, without incident or violence. Jews and Muslims run together, compete in backgammon tournaments together, study together. Jerusalemites take action to quickly remove racist graffiti and replace it with signs of love. Only Jerusalem is home to a city centre square named Tolerance Square as a testament to Jerusalem’s diversity.

Specifically, ultra-Orthodox families opened their homes to the public, asylum seekers shared their Jerusalemite stories, thousands participated in the Family March celebrating Muslim and Jewish neighbors and in a tram station, children built from Lego a Jerusalem for all.

Together, we flooded Jerusalem’s public spaces and reminded the world that here, in Jerusalem, asylum seekers live beside Armenians, Christians beside the LBGT community, Ashkenazim beside Sephardim and Muslim beside Jew.

Just three short weeks ago, on Jerusalem Day, we witnessed Jerusalem’s diversity in action, thanks to its robust civil society that works everyday to promote tolerance. Longstanding institutions like the Jerusalem Foundation have been advancing an open and pluralistic Jerusalem for more than 50 years.

Hence our confidence that the residents of Jerusalem are capable and committed to connecting.

No, it isn’t easy. Jerusalem’s symbolism compounds its complexity, but I believe that the “chibur,” connecting Jerusalemites together, is the key to a rebuilt Jerusalem.

Everyday we show the world our city, a Jerusalem of peace, of tolerance, of understanding. For me, this is Jerusalem’s true face.

To hear more about our Jerusalem, join us in London on 18 June, for a joint Limmud – Jerusalem Foundation event at JW3. To reserve a place, click here.

About the Author
Michal is the founder and chairwoman 0202 – Points of View from Jerusalem, which provides unedited, unfiltered narratives from East, West, and Haredi Jerusalem to each other, in Hebrew, English, and Arabic.
Related Topics
Related Posts
Comments