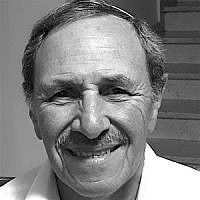 The Blogs
Chaim Charles Cohen
Apply for a Blog
Please note that the posts on The Blogs are contributed by third parties. The opinions, facts and any media content in them are presented solely by the authors, and neither The Times of Israel nor its partners assume any responsibility for them. Please contact us in case of abuse. In case of abuse,
Report this post.

This blog aims be a forum for presenting and analyzing the different ways that conservative and liberal social philosophies propose to cope with the unsettling social ills of post modern society. The goal is not that one philosophy should defeat the other in debate. Rather, the goal is that both liberals and conservatives should recognize the political and intellectual legitimacy of the other’s programs, while remaining personally convinced that the social advantages of their programs are preferable. The author of the blog approaches this task being an adherent of a conservative social philosophy.

The blog will discuss the social ills of post modern society in general, social philosophical terms, and will not get bogged down in disputing the specific , current, political disputes afflicting America and Europe.

I hope that the tone and content of the blog will provide a modest alternative to the extremely polarized, venomous political trench warfare currently being conducted between the conservative and liberal camps. Each camp is currently acting, and treating the other, as if they are literally the devil incarnate, possessing almost zero political or intellectual legitimacy, and thus deserving of a no holds barred opposition. Obviously, such an atmosphere of ‘civil war’ will lead a society down the road to self destruction, and not self regeneration, as the history of social civil wars has shown over the last two centuries.

In summary, this blog is based on the belief and prayer that liberal and conservative camps must learn to begin to recognize the political and intellectual legitimacy of their opponent ( and ‘even’ possibly learn from them) while at the same time continuing to promote their preferred doctrine and programs. This is a challenging political and intellectual exercise, but I am convinced that it is doable, and highly necessary.

What is the definition of the term ‘post modern society’?

The term ‘modernity’ conveyed in the first two thirds of the twentieth century a social certainty or ‘belief’ that industrial, technological, medical and educational advancements will , almost inevitably, lead to a sense of historical progress and human betterment. The concept of ‘modernity’ conveyed the belief that if we let the scientists, educators , industrialists and technologists do their work, there will be more education and material benefits to spread around, there will be more economic and political security and more democracy, and humanity will thus ‘inevitably’ march to an increasingly better future.

The term ‘post modernity’ ( the term that has dominated our socio-political discourse over the last thirty years) refers to a society in which there are no longer any absolute, fundamental social beliefs or certainties that are common to , and can unite, all segments of society. The eighty million deaths of World War Two, and atomic warfare, destroyed the simple belief that humanity is inevitably progressing to an improved stage of human refinement and betterment. In a post modern society, philosophy teaches that the meaning of morality and thought are relative to specific historical and socio-cultural situations and factors. Academia teaches that the primary content of art and culture are best understood as the subjective meanings of individual narratives. In addition, travel and business have globalized and multi-culturalized our frames of social reference. Finally, the internet social network has allowed us to live in an endless variety of accessible sources of intellectual and social stimulations, and to socialize and exist in numerous virtual realities. The result of all these changes is that in post modern society all of our once traditional, normative social institutions have now acquired a ‘relativistic’ social status.

Liberal social philosophy argues that the major ills of post modern society are the outgrowth of the ongoing social restrictions that traditional social institutions on opportunities for expressions of individual creativity and self fulfillment. Core, traditional social institutions and arrangements such the two parent nuclear family, traditional gender roles and gender stratification, racial identities , national patriotism, and fundamentalist religion have all been analyzed and ‘deconstructed’ and exposed to be social structures that unnecessarily and arbitrarily oppress and restrict human freedoms. Liberal academics argue that traditional social institutions do not implement or actualize an understanding of human good that is objectively true or universally recognized. Rather, they exist to serve particular gender, racial or nationalistic self interests, at the expense of exploiting and oppressing others who are not included in their social groupings. Post modern social philosophy has created the intellectual ‘tools’ that enable academics to expose these centers of human exploitation. And now the liberties provided by the social mobility of globalization and social networks provide the mechanisms for liberating oppressed social groups, and reorganizing society into innovative social arrangements and institutions that will be less oppressive and exploiting. The ‘deconstruction’ and replacement of core traditional social institutions (such as a patriotic nationalism, the two parent family and fundamentalist religion) has become the primary goal of socio- political activity in post modern society.

A conservative understanding of the social ills of post modern society

Conservative social philosophy argues that the primary social ill of post modern society is a pervasive personal sense of anxiety and disorientation created by the atomization and social loneliness that has become an integral part of the social life of post modern society. There are no ‘free’ social lunches. The relativistic social philosophy that delegitimized and deconstructed nationalism, the traditional two parent-two gender family and institutional religion has simply left the average citizen adrift, lost, alone and isolated in post modern society. There is a talented, well resourced ‘elite’ of twenty per cent that maybe can beneficially use new found social freedoms to create social identities and lives that allow them to more satisfactorily self fulfill and self create. But the vast majority of citizens lack either the social skills or resources that are necessary to create the social frameworks that can adequately replace a now delegitimized patriotic nationalism, two gender-parent family, and institutionalized religion. A cause and symptom of this social crisis of social isolation and disorientation is the social network of the internet. In the short run the internet can provide support groups and virtual friendships, but in the long run it leaves one socially adrift, atomized and ‘free floating’ in a virtual reality’ that has become one’s ‘only and real’ reality. This can get pretty scary. Liberal social philosophy sees the social norms and restrictions (that they define as being oppressive) of the traditional social institutions cited above as being the Problem. Conservative social philosophy see nationalism, the two gender-parent family and institutional religion as being the Solution to the post modern affliction of a pervasive sense of social isolation and disorientation.

I am almost seventy years of age. I grew up in an assimilated, liberal middle class American Jewish family. The social counter-culture of the Sixties brought me to search for a social culture different than that of my parents. I studied three years to be a Reform Rabbi, but left and found myself much ore existentially and spiritually fulfilled in Orthodox Judaism. I married, moved to Israel, became a social worker and college teacher, help settled Judea and Samaria, and am blessed being a parent and grandparent to an a significant family.

When I compare these life experiences with those of my college peers and relatives, I see the rich life benefits that I have received from the traditional social institutions of nationalism, two gender, two parent families and institutional religion. I believe, and see, that there are other legitimate ways to lead a meaningful, self fulfilling life. I see my peers and relatives living meaningful, satisfying lives. However, I believe that my life can show that the post modern delegitimizing of traditional national, religious and family structures by liberal academics and cultural elite to be misleading and false. I ask liberal social philosophers to revaluate their radical, utopian criticism and rejection of nationalism, religion and the two gender-parent family. These institutions admittedly have restrictive practices that do limit human creativity. But they also provide social benefits that the utopian outlook of post modern liberalism has yet to deliver to post modern man. I ask liberal social philosophers to much more accurately and sympathetically acknowledge (without academic haughtiness) the fact that many ,many people feel , like myself, that the social restrictions that inevitably accompany traditional social institutions are a ‘small price to pay’ for the solid sense of social and spiritual purpose and belonging that traditional institutions provide in the midst of the social disorientations of post modern society.

About the Author
Chaim Charles Cohen was born in the USA in 1947 into a liberal, middle class secular family. He attended Cornell University in political science, studied three years to become a Reform pulpit rabbi, then gradually became Orthodox, made aliya with his family in 1978, practiced social worker, and settled in Psagot in 1982.
Comments