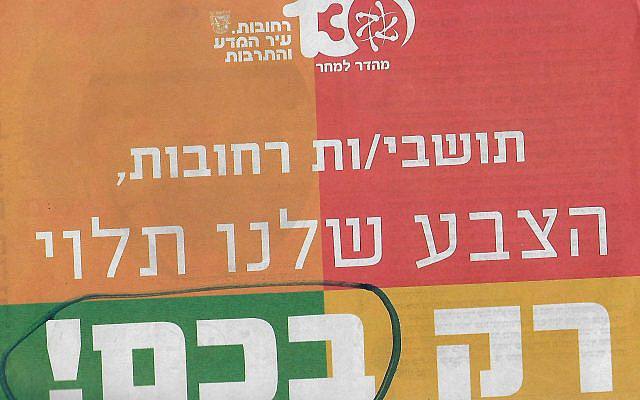 'Our classification depends only on you!' (Photo by Mark Lavie)

Imagine that biblical hero Joseph is ruling Israel today, facing the corona pandemic crisis. What would he do?

We’re reading about Joseph and his exploits these days in our weekly Torah portions. He went from offensive teenager to captive slave in a dungeon to de facto ruler of Egypt. His brothers betrayed him, but in the end, he forgave them.

As a ruler, Joseph’s methods were cruel. He knew, through his divinely inspired interpretation of Pharaoh’s dreams, that Egypt would face a seven-year famine after seven years of bumper crops.

He had two choices. He could have put out a statement to the people, urging them to gather and store their extra crops to prepare for the drought. Instead, he taxed the people in the form of a portion of their crops (some say a fifth, but that appears to be a mistranslation), and he set the grain aside in the kingdom’s own warehouses.

When the famine hit, the people had to turn to Joseph for food. Again, he had two choices. He could have opened the warehouses and handed out the grain to the needy. Instead, he forced the people to buy the grain. When they ran out of money, he took their land. After the land was gone, he took them as slaves.

According to today’s standards, and that’s the easily criticized premise of this article, Joseph was not exactly a populist or a man of the people. Faced with the corona crisis, he would have forced people to close their businesses, lose their income, eat through their savings, and with the exception of small amounts of compensation handed out to the wealthy as well as the poor, let them suffer—leading to hardships, hunger, and even domestic and public violence.

Oh, wait. That’s kind of what we’re doing. Though to be fair, if Joseph were true to his allegiances—the kingdom before the people—he would probably have sold the vaccinations instead of providing them through HMOs for no extra charge. At least we’re not going that far.

Also to be fair, our people are not doing their part, either. By failing to wear masks consistently, stay away from crowds, and wash hands often, we have brought much of this problem on ourselves. Governments have been setting the wrong examples, with officials flouting their own rules and arrogantly putting out ads about color-coded ratings that determine corona limitations that read, “Our rating depends only on you.” You, not us. Again to be fair, my city changed its ads to “us” after I complained, but the billboards on the main roads still say “you.”

Clearly, there was/is a better way to deal with this crisis. For an example of a more enlightened leader, we can look back at the current Torah portions.

Joseph may have saved the kingdom, but it was Judah who saved the future Jewish people.

First, he talked his brothers out of killing the obnoxious, bossy teenaged Joseph, selling him into slavery instead. Then he persuaded his elderly father to part with his beloved son Benjamin as the only chance to see the Egyptian strongman again and buy more food.

The strongman, Joseph, Benjamin’s only full brother, plotted to keep Benjamin with him. We don’t know what he would have done to the other brothers, but chances are it wouldn’t have been pretty.

Into the breach jumps Judah. In the longest speech in the Bible, he entreats Joseph to let Benjamin go, offering himself as a slave instead. He mentions their father 14 times, plucking his brother’s heartstrings, and leading Joseph to realize that these are his brothers, after all, and he owes it to them, and certainly to their father, to come clean. He reveals his true identity and invites them to join him in Egypt.

How did Judah know what to do?

There’s a clue a little farther back, when Judah is tricked by his daughter-in-law into fulfilling the requirement of providing her a husband after two of his sons died, and he admits he was wrong.

Fool me once, shame on you. Fool me twice…

You won’t hear this anywhere else—but it’s clear to me that Judah knew he was talking to Joseph when he started his speech. He had brought Benjamin to Joseph’s table, watching him get special treatment though he was the youngest. He looked at Joseph, looked at Benjamin, looked back at Joseph, and he recognized who they were—brothers. Then he devised a speech designed to appeal to Joseph’s innate sense of goodness, justice, and family loyalty. It worked.

So now, with the corona crisis, we can ask—what would Judah do?

Forgive me for the wild extrapolation. I actually dislike it intensely when people judge past eras on the basis of modern standards, or ascribe modern words and actions to biblical figures, and that’s what I’m doing here.

Even so…a leader like Judah, who learns from his mistakes, puts the interests of his people before his own, and handles a crisis with courage and finesse, would find a better, more humane way to deal with the corona challenge.

Perhaps Judah would lead his people (us, not you) into voluntary compliance with regulations, not police enforcement, because it’s the right thing to do. Perhaps he would mobilize the government and charities to help those in need.

Perhaps—and this is what’s missing here today—he would create a reality in which we are all in this together, we all have responsibility for each other, and we will do the right thing for the sake of us all. Masks, distancing, and hygiene. It’s not that hard.

Then, Judah would say, we wouldn’t need lockdowns at all.