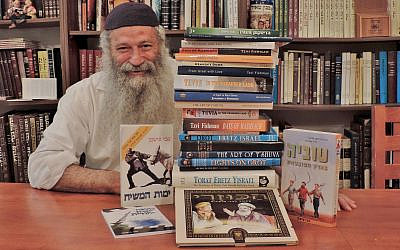 In the course of my work as the Israel correspondent for The Jewish Press newspaper, I interview a lot of people, including politicians, rabbis, scientists, hilltop youths, Hasidic singers, terror victims, start-up innovators, and the like. This time, confined to my home during the Corona quarantine, I decided to interview myself. Here it is:

Author and filmmaker, Tzvi Fishman, has been taking advantage of being grounded at home in Jerusalem by cranking out a timely new Kindle book called, “The Corona Bible – Coronavirus and Faith in Troubled Times.” In addition to offering the self-help guide as a free download on his tzvifishmanbooks.com website, he has posted seven other titles as Corona freebies. He hopes that to fill the long days and weeks in home quarantine, people will rediscover the joy of reading books, especially books with Jewish content. A former screenwriter in Hollywood, and Instructor of Dramatic Writing at the NYU Film School, he now lives in Jerusalem with his wife and seven children. I asked him about the initiative, his books and movies, and about his personal journey from Hollywood to the Holy Land.

“I think more and more people are beginning to realize that the Corona pandemic is something far beyond the realm of anything the world community has experienced in our lifetimes. People with a strong foundation of Faith and Trust in God have a sturdy staff to lean upon in times of crisis and confusion like this. Even so, they too often need a potent injection of Faith. For them, “The Corona Bible” comes to remind them of what they already know, but which has become routine for them over the years. A great many others, especially the “enlightened” non-believers which modern Western culture has bred, they need a guide, or guidebook, to reveal the Hand of God behind the current Divine Visitation which is forcing a monumental change in human existence. Corona has the meaning of crown and kingship. The King wants mankind to recognize His total rule and mastery over the world.”

How is the theme of faith presented to make your book different from the many books about faith that already exist?

For one thing, my style of writing is different from other writers. And I have my own experience as a baal t’shuva from Hollywood upon which to draw. Once upon a time, I was a totally assimilated Jew, chasing after the American dream of fame and success until the Director of directors pulled the curtain aside to reveal the that material world was really a ‘Truman Show’ no more real than the Dodge City on a Hollywood studio backlot. At the same time that I quote the teachings of Rabbi Kook, Rebbe Nachman of Breslov, and the Rambam, I use the Coronvirus as an example of how God calls to us to recognize His Kingship, not because He needs our adoration, but for our own enlightenment and good. When a person reaches the gates of Heaven without having forged a genuine bond with his or her Creator, all of the money he left behind in the bank won’t help him bribe his way into Garden of Eden.

Tell us about some of the free-download books on your website.

“Days of Mashiach” is a collection of humorous and thought-provoking short stories about Jewish life in Israel and the Diaspora. A translation was published in France by a non-Jewish publisher and the storytelling was compared to Voltaire, Kafka, and Samuel Beckett. The novel, “DAD,” tells the poignant and comic story of a baal tshuva with five hyperactive children, who has to also take care of his mother with Alzheimer’s and an ailing and super-anxious father, not to mention his pregnant wife. The novel, “Fallen Angel,” tells the fun story of an angel who is sent to Manhattan to warn a spiritual conman and bestselling-author to mend his deceitful and whoring ways. “From Israel with Love” is a spicy, off-the-wall collection of blogs about the mitzvah of living in Eretz Yisrael and about the shortcomings of Jewish life in the Diaspora. “From Hollywood to the Holy Land” describes (with accompanying photos) my miracle-filled journey from being an assimilated screenwriter in Hollywood to long-bearded Rabbi in the Holy Land. 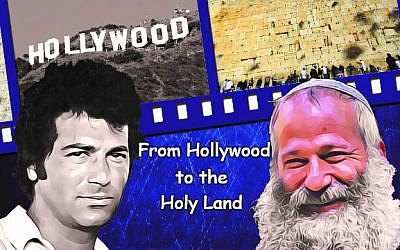 What about your “Tevye in the Promised Land” trilogy which follows the “Fiddler on the Roof” milkman from Anatevka to the Promised Land to become a pioneer builder of the Land, and a freedom fighter in the Jewish Underground against the British? 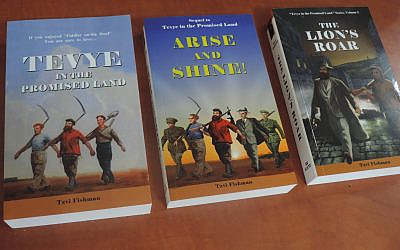 I put the books on Amazon Kindle. Readers who enjoy historical fiction will find colorful portraits of Rabbi Kook, Zeev Jabotinky, Yair Stern, David Ben Gurion, and a full cast of the larger-than-life Zionist heroes, interconnected with Tevye and his daughters, in, what to me, is history’s most triumphant saga – the rebirth of the Jewish Nation in the Land of Israel in our time.

You have also published a series of books on the teachings of Rabbi Kook. What led you to that?

In my opinion, to understand the incredible transformation of the Jewish People in our time, from being scattered communities all over the world, minorities in foreign lands, to becoming our own independent Jewish Nation in Israel, one of the most powerful nations on the globe, you have to read the writings of Rabbi Kook. He is a Torah scholar, philosopher, poet, and prophet all in one.

What are some of the movies you wrote in Hollywood?

One was a bittersweet comedy called “Law and Disorder” starring Carroll O’Conner and Ernest Borgnine. Another was an action film called “The Hitter” with an all-Black cast. For some quick money, I penned a trashy horror film that I’d rather not name, and a super hero script that I sold for a million dollars to Carolco Pictures, the film of which never got made.

Recently, you directed and produced a feature film in Israel called “Stories of Rebbe Nachman,” which is composed of four Hasidic fables, and stars Yehuda Barkan, Israel’s all-time box-office champ. What led you back to filmmaking?

People often mistakenly think that when a person returns to Judaism, he or she has to give up one’s previous life. The opposite is true. Of course, your lifestyle and behavior undergo a change, but God wants people to use the talents He gave them. Becoming religious doesn’t constrict one’s life – it expands it in a more positive and meaningful direction.

What project are you working on now?

I’m writing part four in the “Tevye in the Promised Land” series, and a half humorous, half introspective novel about a successful New York celebrity lawyer who travels to Israel to spend time with his son who has become a baal t’shuva and lives on a remote hilltop in the West Bank.

Can you make a living writing books and directing movies which focus on Israel and the Torah related subjects which you enjoy?

Not really. To make a living, I do some journalistic writing, translate books from Hebrew to English, and teach. It doesn’t add up to six figures, but it beats writing trashy movies in Hollywood.

About the Author
Before making Aliyah in 1984, Tzvi Fishman taught Creative Writing at the NYU School of the Arts. He has published nearly twenty novels and books on a wide range of Jewish themes, available at Amazon Books and the tzvifishmanbooks.com website. He is the recipient of the Israel Ministry of Education Award for Creativity and Jewish Culture. Recently, he produced and directed the feature film, “Stories of Rebbe Nachman” starring Israel’s popular actor, Yehuda Barkan. Presently, he is working on Volume Four of the Tevye in the Promised Land Series.
Comments