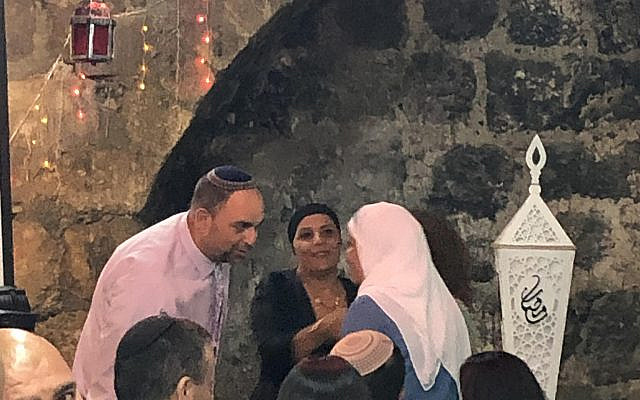 Lod's Mayor and a prominent Arab social leader at a Ramadan break-fast in 2019.

Benny Gantz has called for an emergency unity government, adding “that it would have to include elements from all political sides, an implication that he would insist on the inclusion of the majority-Arab Joint List,” – according to the Times of Israel.

The Corona Virus provides an opportunity for all of Israel’s identities to come together over a shared crisis – Jews and Arabs, Religious and Secular, Ashkenazi and Mizrachi, Center and Periphery.

There is a precedent for this type of cooperation. Arabs, Jews, and other diverse identity groups have come together over their shared goals to form mixed governing coalitions in seven of Israel’s mixed cities. The results I saw in Lod: different identities coming together first over practical needs, slowly leading to the formation of trusting relationships, opening the door to higher-level reconciliation.

Maybe a unity government will be formed and Israel’s diverse politicians will form new working relationships that pave the way for them to work together on Israel’s other pressing issues – economy, infrastructure, health, religion and state.

Maybe all of the citizens of Israel – and of the world – will realize now that despite our differences, we are all still human, we do not have the cures for everything, and our actions affect each other on this interconnected planet.

Maybe our sense of shared humanity will increase.

Maybe this will be a wake-up call for climate change.

Maybe this will all go away in a few months and we’ll return to our bubbles and smartphones, none the wiser.

Maybe this crisis is an opportunity.

I hope we don’t waste it.