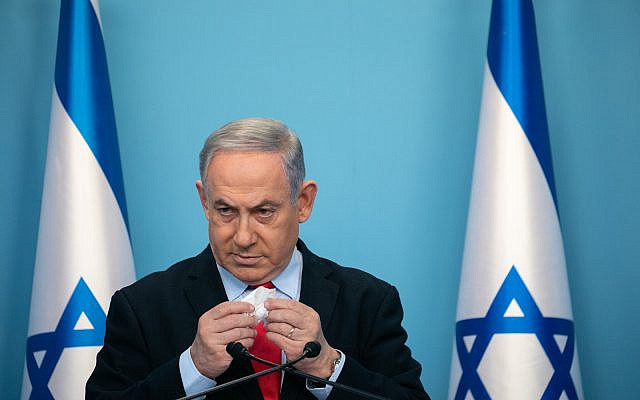 Prime Minister Benjamin Netanyahu at a press conference about the coronavirus at the Prime Minister's Office in Jerusalem on March 12, 2020. (Olivier Fitoussi/Flash90)

The corona pandemic is affecting not only the physical, economic, social and mental wellbeing of Israel’s population, it is also posing a life-threatening danger to its democratic health. Growing concern over the escalation of the virus, coupled with the manifold effects of efforts to contain its spread, have made it easy to either ignore or – even worse – to dismiss its political byproducts. Failure to confront the potentially lethal regime repercussions of the corona malady now may yet prove to be the most lasting results of this terrifying plague.

For the past few months, and with renewed energy for the last six weeks since the inconclusive March 2 elections, the management of the health crisis in Israel has been in the hands of the non-elected caretaker prime minister, Benjamin Netanyahu, who has thrice been denied the mandate to construct a government by the majority of Israel’s citizens. He not only controls all aspects of official policy; he has also assumed the role of professional interpreter and self-appointed national spokesperson. This centralization of power – along with its blatant personalization – are unrivaled even in the history of a country that has known severe security threats and outright wars throughout its existence.

This process has four major, and profoundly disturbing, manifestations. Together, if unchecked, they spell the dissolution of Israel’s political fabric.

The present health threat in Israel, as in many other countries, has imposed severe constraints on the freedom of movement of its population. What started off as travel warnings quickly metamorphosed first into limited compulsory quarantines, then into suggested broader confinements, and now into the imposed isolation of most citizens. To ensure compliance with these dictates, Benjamin Netanyahu announced that electronic and digital means would be used to track the movements of all those suspected of having contracted the virus. The violation of personal privacy on such a widespread scale is unprecedented. It constitutes an unspeakable violation of individual liberty.

The same holds true for the effective prohibition on all forms of public protest (through a ban on gatherings of over ten people in one place) and hence also, albeit indirectly, on freedom of association. Most social interaction has been confined to digital networks, which remain a poor substitute for social interchange. These also have the effect of numbing public discourse, preoccupied as its participants are with medical concerns and their rising economic implications.

To date, no real restraints have been placed on freedom of speech, but the media – with very few exceptions – has abandoned its traditional watchdog role for the more comforting one of transmitter of unfiltered information. Its has thus forfeited its centrality in assessing, questioning and challenging government policy. Civil rights, already in decline, are consequently in a freefall.

Despite multiple appeals to social solidarity in the face of a common emergency, corona policies have only served to accentuate and exacerbate built-in inequalities. There is only one relevant factor in social differentiation during medical emergencies: public health risk factors. Anything else is not only incidental; it is suspect

This is why persistent attempts to cast aspersions on Arab citizens of Israel on a regular basis through ads, tweets and transmissions on social networks are nothing short of abhorrent. At the same that Netanyahu calls for a communal effort to combat the spread of disease on television, his digital platforms have been spouting hatred against the supporters and leaders of the country’s third largest party – the Joint Arab List. It is as if the weight of their vote is not comparable to that of their Jewish counterparts. Nothing could debase the basic democratic principle of “one person, one vote” more than such an intimation.

Now, too, distinctions are being drawn between rich and poor, the salaried workers and independent businesses, office-workers and service-givers. Income differentials, instead of being addressed in a time of real economic uncertainty, have been magnified. The bankruptcy of past policies is now coming back to haunt its designers in the form of Mr. Netanyahu and his decade-old extreme neoliberalism. The rights of minorities and the underprivileged are its key victims.

The principle of separation of powers underlying democratic regimes was instituted to protect against the abuse of power by any one individual, group or political persuasion. It is buttressed by structural checks and balances and by a strong tradition of transparency and accountability. For the last decade, under the aegis of the Likud and its leader, these institutional protections have been demeaned, undermined and seriously weakened. The corona crisis threatens to unravel the little that remains of these essential guardrails.

Systematic attacks on the court system by Netanyahu – now under indictments for bribery, fraud and breach of trust – have already shaken the public standing of Israel’s judiciary. Even in the midst of the rising corona pandemic, doubts have been raised about the integrity of the justices charged with hearing his case. And now, in the stealth of night, his specially-appointed Minister of Justice, Amir Ohana, announced the curtailment of judicial proceedings for “medical emergency reasons”. Netanyahu, due in court tomorrow for the reading of his indictment, has thus secured yet another delay (until May 24) in his court case. The rule of law, under the guise of the coronavirus, has been dealt a near-lethal jolt.

At the same time, the Knesset, the representative institutional monitor of the executive (and the opposition which is so necessary to query government actions) have been non-functional for over a year. Without the ongoing work of the legislative branch no ongoing open debate can take place – nor can consequent corrections be set in motion. Mr. Netanyahu and the members of his right-wing bloc are still doing everything possible to manipulate and distort the critical functions of the legislative and judiciary branches in favor of an executive government subject to the whims of its beleaguered leader. This is the stuff of neo-authoritarianism writ-large, now further driven by the corona scare.

4. Loss of Trust in the System

Just when steady leadership is especially needed, Israeli citizens have been treated to nightly press conferences in which responses to their genuine fears have been sprinkled with political innuendoes designed to glorify the caretaker prime minister’s skills globally and domestically and demean or belittle those of his opponents. Those seeking reassurance are unsure whether they are getting the best professional guidance available or are being subjected to a series of political acrobatics that hardly serve their interests.

Efforts to knit together a government in the midst of this unique situation have reflected this ambiguity. Netanyahu’s televised calls to form a national unity government (pointedly without the Joint Arab List) have not been followed by any direct invitations to the leader of the Blue-White party to start negotiations. Options have been broadcast publicly, but not followed-up concretely. And now that a majority of the incoming Knesset has recommended to President Rivlin to give the task of forming the next government to Benny Gantz, it is not clear how Netanyahu will respond, nor how he will choose to further use the corona emergency to maintain his flailing grasp on power. What is abundantly evident is that while he has excelled in calling for a common “war on an invisible enemy”, he has been blind to the preferences of the majority of the country’s electorate.

These circumstances do not instill trust in government. They also undermine confidence in the system. The mixture of personal anxiety, a rampant and largely uncharted medical emergency, along with prolonged political turmoil, allows for almost imperceptible – but extremely profound – regime change.

Israelis are now confronting a multi-faceted challenge of monumental proportions. They can either succumb to the herd mentality that they are being encouraged to adopt or begin to do what they have always done best: query, question, modify and innovate. In the next few days, they can decide to seize the moment to revive Israel’s foundational values of equality, liberty, justice and tolerance for all the citizens of the country or allow the country to complete the process of democratic decline accelerated by the present emergency. Now is the time to revive Israel’s democratic skepticism and creativity: this is the only answer to the alarming prospect of chaotic coronacracy.