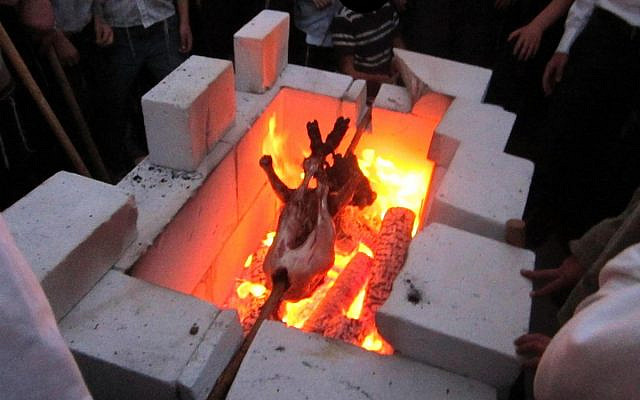 The Passover Sacrifice Do-Over: Pesach Sheni to the CoronaVirus Rescue

By now just about everyone knows that our government has directed that convening groups in excess of a minyan of people are verboten – for any purpose, it appears. In many communities in the US and in Israel, even though not required, shuls have gone further and closed entirely. To be sure, most of those in the US who are doing this, are those with membership in the multi-hundreds. Rabbis in the US are “setting an example” and praying alone – even on Shabbat. Directives have been given not to invite people for Shabbat lunch, and not to convene personal minyanim for davening. This might be considered a chumrah, as at present no governmental body has so directed, (and only one has imposed any in town-limitations on movement). I have even seen that a noted Israeli rabbi who was assigned to 14-day quarantine is voluntarily extending his stay (quarantine d’mehadrin?). While frummer Yidden might say this is good – and, in fact, there is some medical evidence that sustains the decision, some might say it sends a message that the public health authorities don’t know what they are doing.

The quixotic popular response is perplexing. On one hand, people are scared to meet in groups, on the other hand, people throng and crowd and mob supermarkets. On one hand, people won’t daven in shul – even in small groups, on the other hand, they live fearlessly among hundreds of others in high-rises, sharing ventilation and sewage systems. The rabbinate says that adhering to government health regulations is required as halacha– but I have not seen anyone looking ahead to what will happen on Pesach. And the governmental directives are set to last for five weeks – and that includes Pesach.

Certainly, davening in a minyan is not required, halachically – even on Shabbat. But does that count for going to shul on Pesach – which might be considered the equivalent of taking part in Korban Pesach?

So, in the interest of thinking ahead here is a solution:

In Bamidbar ch. 9 we have the unusual situation of men who cannot partake in the Korban Pesach (Pascal sacrifice) because they are personally unclean. They seek a solution for their inability to take part in the Korban Pesach from Moses, who asks G-d for a solution. In response, the Almighty goes further and provides an out not just for the personally unclean — but for someone on a (business?) trip to a far-away place. We are given a chance in this case for a do-over. A Pesach Sheni – A Second Passover.

Now, one might argue that being unclean is outside one’s control. But a journey? It is also hard to believe that the generation of the Midbar was contemplating traveling to any far-away place (like, to where?) It is also strange that Pesach is the only holiday for which the Torah provides a “do-over.” No such opportunity adheres if one is unavailable for Succot or Rosh Hashana or Yom Kippur, for example – or even Shabbat. So, why Pesach?

To me, this section was clearly a prophetic piece, to be utilized in the future. For future generations, אוֹ לְדֹרֹתֵיכֶ”

I once suggested that this Pesach Sheni was provided (or created in advance) for Esther – to allow her to have the nation fast for her on what would have then been Pesach – prior to her visiting the King. It would be hard to believe that our Rabbinic ancestors would think of violating a halachic imperative (feasting on Pesach) at the behest of a mere woman, even if she was a (secular) Queen. The fact that our national existence was in jeopardy would have even been more reason to adhere to the strict application of the law and not make changes – even if the request to the Sanhedrin for the accommodation would have been made by Mordechai.

Only the halachic “out” of Pesach Sheni, I surmised, allowed the Sanhedrin to both accommodate Esther’s wish and comply with halachic requirements.

I raise that suggestion again now.

For most people, Pesach means congregating with family who live in different areas, who may have been unknowingly exposed in their hometowns, and who now are meeting with others they might unwittingly expose, or going to a hotel. I would venture to say that for a plurality of folks, the Passover Seder includes more than ten people. Certainly, those going to a hotel will be impacted by this rule.

Deferring observing of Passover for another month (the date of Pesach Sheni this year would be May 7-May 8), would allow the country a breather. If the message from the SARS of 2002-3 is any example – since it started about the same time of the year as CoVid 19 — perhaps it might end about the same times, as well – which takes us to early May. 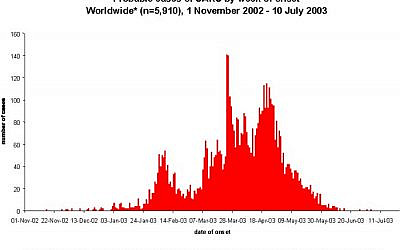 Probable Cases of SARS (2002-2003) by week of onset; graph courtesy of the World Health Organization

And one final recommendation to the government. Limiting meetings to ever smaller numbers of groups is not going to curtail the spread. If someone attending even a bridge-party of four people, let’s say in Hadera, – had visited relatives in Jerusalem, a “hot-spot” of contagion, a few days earlier, that person could easily track the disease from one area to another. It is not only the size of the meeting that impacts spread – it is the transmission from exposed persons – or areas — from one place to another that prolongs spread.

One historic response to epidemic management is called “reverse quarantine.” In this approach, areas who are disease-free cordon themselves off from visitors from the outside. People can leave if they want- but no one comes in. That mechanism would allow those large swaths of towns in Israel that are not affected to live relatively normal lives for as long as prudent. So, if Netanya, for example, cordons itself off from areas which are affected– it might stay corona-virus free far longer than merely limiting meeting size which also includes those who might have been exposed elsewhere.

Preserving the spirit of the Nation and Who’s minding the store?

Surely, closing borders, as I have repeatedly said, was a good thing. But – then what? So we shut borders, and we are still restricting access – but that’s as long as a prospective visitor can show on entry that s/he has a place to stay on entry. But how does that person get from the airport to their quarantine? By taxi – exposing the taxi driver? Half a solution does not help. Allowing Israelis to enter, and then go straight to a workplace that involves person- to-person contact (like the Israeli doctor arriving from France) -what kind of a holistic plan was that?

As for effectively shutting down the country – economically — for five weeks (even though the government denies this is what they are doing it), including apparently doing away with the Bagrut, one questions the wisdom of this decision. In five weeks, we may have fewer people ill, but will we still have a functioning country?  Certainly, it behooves a ministry of health –which is short on hospital beds — to keep case numbers down. After all, if we did have the expected number of cases, it would showcase the ministry’s poverty of health planning. One has to wonder if this latest initiative of shutting down daily living – isn’t to protect criticism from poor public health planning?

It is to be remembered that last year Israel had 4300 cases of measles and 3-5 deaths -and the government did nothing.  NOTHING. Even vaccines for adults were unavailable until just a few weeks ago.

No one can accuse us, in Israel,  of not responding to the coronavirus matter. But are we reacting wisely? And, is it possible there is another reason for the most recent hyper-response of Sat. nite – one without any parallel in any other country — or precedent in any other epidemic – ever?

Again, I ask, why wasn’t reverse quarantine of areas which are not affected even considered by the MOH? Why is the entire country on effective lockdown? Is there, perhaps,  another reason why the government is stoking panic? And if we aren’t panicking yet- just wait till Pesach.

As it is written, “Who is wise: One who sees the future.” Alas, I fear our entire political machine is nearsighted and looking only inward.