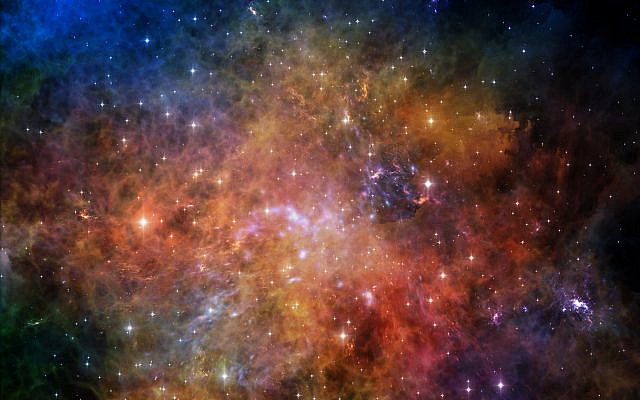 Now the earth was unformed and void… Genesis 1:2

We have a big problem in cosmology. It is a problem of initial conditions.[1] However, before we can explain this problem, we need to review some basic concepts of thermodynamics.

The second law of thermodynamics, as it is applied to the universe as a whole, presents us with two problems. First, the universe is doomed. As the entropy increases, sooner or later, it is liable to reach the maximum level, Smax,[7] at which moment the music stops—the universe comes to a state of thermal equilibrium, in which all chemical processes stop. This doomsday scenario is called the heat death of the universe. The second problem is that, looking back in time, we realize that the further back in time we look, the lower the value of entropy, with its lowest value at the time of the Big Bang. That means that the universe had the least amount of disorder at the beginning of time and was in a highly ordered special state. The low level of entropy in the early universe is called the “past hypothesis.”[8] It is hard to imagine what would cause the universe to have this very special state at the moment of the Big Bang.[9] This is called the problem of the initial conditions of the universe (and it is closely related to the problem of the fine-tuning of the universe).[10]

Cosmologists find the problem of the initial conditions very irritating. First, resolving this problem requires introducing an unknown and yet-to-be-found scalar field, with its own quantum dubbed “inflaton,” as in inflationary cosmology proposed by Alan Guth. Second, a highly organized universe in a very special state at the moment of creation points to the Creator, which few physicists are willing to admit (risking their career in science). The problem remains unresolved to this day. However, there are a number of speculative proposals for why entropy was so low at the time of the Big Bang. One of them, proposed by Sean Carroll, speculates that perhaps an earlier universe had very high entropy and spun off a baby universe with low entropy.[11]

Kabballah informs us that a cosmological scenario, beginning with a universe in a highly ordered state and ending with death, has already happened before. The universe in which this occurred is called the universe of Tohu.

Before[12] the world we inhabit was created, God created the first universe, called the universe of Tohu. Tohu is usually translated as chaos. This universe is hinted at in the very beginning of Genesis:

Now the earth was unformed and void… Genesis 1:2

The original Hebrew word for “unformed” is tohu. The Kabbalists see here a clear reference to the first created universe—the universe of Tohu. (The second universe to be created was the universe of Tikun, i.e., “Rectification”. Tikun is the rectification of Tohu.) However, it may be misleading to translate the Hebrew word tohu as “chaos.” In reality, the universe of Tohu started as anything but chaos. Tohu was the opposite of chaos—it was the epitome of strict order. The divine emanations, sefirot, emerged in the universe of Tohu one by one in the strict order: Chokhmah, Binah,  Da’at, Chesed, Gevurah, Tiferet, Netzach, Hod, Yesod, and Malchut. These sefirot were not yet arranged in three columns, as in the Tree of Life configuration we find later, in the world of Atzilut. Moreover, they were not interpolated with each other, allowing for one attribute to moderate the other (Chesed of Chesed, Gevura of Chesed, etc.). Instead, they were arranged as distinct points along a vertical line, one after another. This strict order is hinted at in the biblical verses about the eight kings of Edom:

Note the recurring refrain—each succeeding king ruled after the previous king had died, with no overlap. The Arizal interprets the story of these kings as a reference to the vessels of the seven lower sefirot (midot) of Tohu. (The first king, Bela the son of Beor, refers to the Sefira of Da’at, in which the vessels’ breakdown is rooted, although it itself did not shatter.) Their death hints at the shuttering of the vessels of the seven midot of Tohu. According to the Lurianic doctrine of shevirat hakelim (the breaking of the vessels), the vessels of Tohu shattered and fell into the universe of Tikun, where they await their rectification. This is the

Note the recurring refrain—each succeeding king ruled after the previous king had died, with no overlap. The Arizal interprets the story of these kings as a reference to the vessels of the seven lower sefirot (midot) of Tohu. (The first king, Bela the son of Beor, refers to the Sefira of Da’at, in which the vessels’ breakdown is rooted, although it itself did not shatter.) Their death hints at the shuttering of the vessels of the seven midot of Tohu. According to the Lurianic doctrine of shevirat hakelim (the breaking of the vessels), the vessels of Tohu shattered and fell into the universe of Tikun, where they await their rectification. This is the cosmological drama implied by the story of the sequential kings of Edom.

Thus, the “cosmology” of the universe of Tohu evolved from a highly ordered state (with very low entropy), with one sefirah following the other in a strict order of succession, ending with shattering of the vessels of the lower seven sefirot (midot). This resulted in a chaotic state, with shards of the broken vessels “falling” into the next universe of Tikun.

Interestingly, as mentioned above, one of the proposed explanations for the low entropy at the starting point of the universe was a hypothesis that an earlier universe (one existing before the Big Bang) had very high entropy and span off a baby universe with low entropy. Well, this is exactly what Kabbalah tells us happened in the spiritual words. The universe of Tohu experienced the shattering of the vessels, which led to a state of chaos with very high entropy. This event gave rise to a new universe, the nice and orderly universe of Tikun, with low entropy.

As mentioned above, cosmology predicts the so-called heat death of the universe, when all parts of the universe will reach thermal equilibrium, with entropy reaching its maximum value. This parallels the death of the kings of Edom—the shattering of the vessels of the midot of Tohu. The story of Tohu gives us a hopeful alternative to the doomsday scenario of modern cosmology. Just as shattered Tohu was reconstituted in the universe of Tikun, so too, our physical universe may be reconstituted into another universe—olam habah (the “future world”).

[3] From the point of view of statistical mechanics that links quantum mechanics to thermodynamics, entropy is the number of microstates in which the system could be arranged. The Second Law of Thermodynamics follows automatically from this definition: since there exist many more random microstates than special microstates, it is more probable that in the next moment the system will assume a random microstate—hence the tendency of an isolated system to evolve towards increasing randomness (disorder) and increasing entropy.

[9] Nobel laureate, Sir Roger Penrose, calculated the probability of this special initial condition for gravity at the time of the Big Bang to arise randomly and found it to be so unimaginably small that the number of zeroes after the decimal point far exceeds the number of particles in the universe.

[10] The problem is even more serious than that. The best evidence we have for the Big Bang is the microwave background radiation, which is in remarkable agreement with the theory. However, the theory is based on the assumption that at the time of the Big Bang, the universe was in a state of thermal equilibrium, which has maximum entropy. How can entropy, which already was at its maximum value at the time of the Big Bang, continue to increase as is required by the second law of thermodynamics? It’s a paradox!

Originally published on QuantumTorah.com on 9/30/2021.