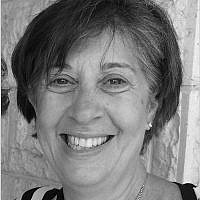 The Blogs
Debra Weiner-Solomont
Apply for a Blog
Advertisement
Please note that the posts on The Blogs are contributed by third parties. The opinions, facts and any media content in them are presented solely by the authors, and neither The Times of Israel nor its partners assume any responsibility for them. Please contact us in case of abuse. In case of abuse,
Report this post. 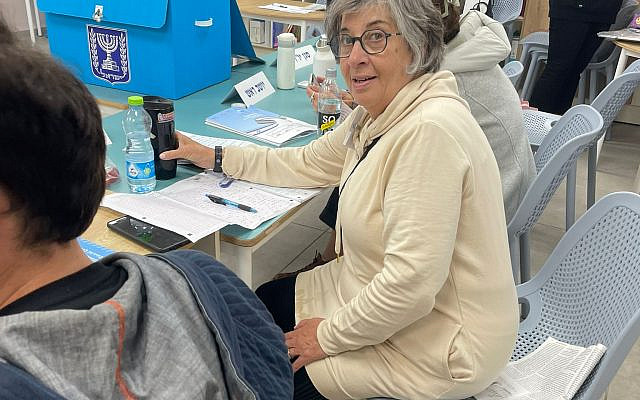 The author at the polling station. (courtesy)

From the time of Creation, we have been counting. The days of the week are counted in Breishit, The number of Israelites who entered Egypt are counted (70 people Exodus 1:5)

An entire book is dedicated to numbers and counting. Are we obsessed with counting?

It felt that way on election day. I had the opportunity to get an insider perspective of what goes on at the polling station.

The process to work as a “Mazkir Kalpi” a polling secretary is quite a serious one. Following the successful completion of an online exam,  I was interviewed by two election employees. This was followed by a four-hour intensive course and another exam.

The night before election day, we gathered in Binyanei Hauma, met the person in charge of our station, met our co-workers and were given all of the sensitive material needed to set up the polling station. We were reminded of the importance of being at our location by 6 a.m. on election day, November 1st.

I was awake at 4:45, packed sandwiches for the day, water and coffee. I arrived at my location at 6 a.m. A few other people were there. The building was locked!! Finally opened at 6:15 and along with my wonderful co-worker Eliyahu, we scrambled to get things organized. The classroom we were assigned to was dirty- we had to wipe down tables, sweep the floor and move furniture. We were ready to open on time at 7 a.m., however, the chairman of our station, the party rep, observer, and person who films were all late. Finally at 7:15 we were given permission to open, although some people were still missing.

Once we started, things went almost smoothly. This election, no photography was permitted in the room and there were signs everywhere. Parents were angry, some verbally abusive and some just filmed even though they were told not to.

I discovered that so many people still carry their original Teudat Zehut (identity card) as there is no expiration date. A 90-year-old woman proudly showed us the photo on her Teudat Zehut — she was about 14 at the time.

I was surprised that the election committee did not provide us with any food or drink during the course of the day. The bathrooms were filthy. How does one expect people to work from 6 AM to midnight under such poor conditions!?! I found it shocking. 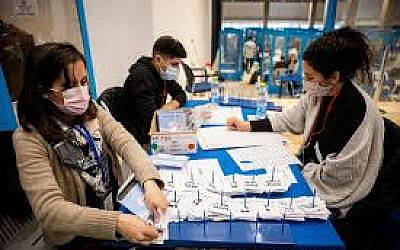 Finally at 10 p.m. — door is locked and everyone in the room mobilized for the counting process. Our filmer read the protocol to us. The voting booth was dismantled and all  unused papers, envelopes and other material were placed in a bag and sealed. The voting box was unlocked and the envelopes were counted- the number of envelopes had to match the number of voters. Once that was verified, the real counting  began. Each envelope had to be opened, the slip removed, inspected, called out, marked off by three people and then placed on a peg. After opening all of the envelopes, the two recorders called out the number — there was a discrepancy with the number of votes for one of the parties. Those slips were counted again. Once everything was reconciled-all voting information was placed in a box which was then locked. This box was then presented to two voting overseers who reviewed all of the information and once it was long approved we were able to go home- at 1 a.m.

This was a long and tedious process. Is it the most efficient and safest way to vote? Unclear. What I can say is that all of the people I worked with took their responsibility very seriously and professionally. All were proud to be involved in this democratic process.

Another experience off of my bucket list. I am happy I did it, proud to be an Israeli no matter what the outcome of the election is. But you will not see me behind the desk at the next election!

About the Author
Debra Weiner-Solomont is the coordinator of the Pardes Institute Community Education Program. She received her MSW from Wurzweiler School of Social Work. Debra along with her husband and sons came on aliyah from Brookline, MA, 27 years ago.
Related Topics
Related Posts