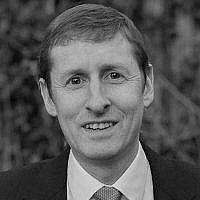 The Blogs
Shlomo Weissmann
Apply for a Blog
Advertisement
Please note that the posts on The Blogs are contributed by third parties. The opinions, facts and any media content in them are presented solely by the authors, and neither The Times of Israel nor its partners assume any responsibility for them. Please contact us in case of abuse. In case of abuse,
Report this post.

Twenty-five years ago my friend Mark Rosenberg taught me a secret method of keeping score in Scrabble. I’m not a regular Scrabble player, but with no shul and no play dates during the COVID-19 pandemic, this past Shabbat was especially long. When my family decided to play Scrabble in the afternoon, I had the thrill of teaching Mark’s method to my kids.

When you play Scrabble on Shabbat you can’t keep score in writing, so when I was growing up we would use thick books to keep track of how many points we had. You would turn the pages as you accumulated points. (Scrabble on Shabbat in halacha is a little complicated. See here for a discussion of some of the issues.)

Mark was a math guy, and to him it seemed obvious that if you wanted to keep things simple you would keep score using a form of binary counting. As it turns out, binary scoring is actually easier than page turning, and a lot more fun. With a three-day quarantine Yom Tov on its way, what better way to bond with family and pass time than with Scrabble? You can watch the two-minute video above to learn the method. Here is a brief written description:

Each player lines up a row of raisins in front of them. Counting from the left, the first raisin represents the number one. The second raisin is two and the third raisin is four. You keep doubling the number so raisin four is eight, five is 16, six is 32, and so on. To tally a score you simply slide raisins upward. If you score eight points, slide the fourth raisin up so that it is no longer in line with the other raisins. If you score five more points, slide up the third raisin and then the first raisin (since 4+1=5). Raisins one, three and four are now up, indicating a total of 13 points. Whenever you earn points, you first raise the raisin representing the highest possible number and then work your way down. So if you score another 34 points, slide up raisin six and then raisin two.

Now, here comes the fun part: carrying. If you want to raise a raisin but it’s already up, just slide down that raisin and carry the number by sliding up the next one. If the next one is already up, continue carrying to the right: slide that raisin down and raise the next one. Keep going until you are able to raise a raisin. So in our example (where raisins one, two, three, four and six are up, for a total of 47 points), let’s say you now earn five more points. First we’ll add four points to the board. Raisin three (representing the number four) is already up. So you slide down raisin three, carry to raisin four, but slide that raisin down since it’s already up, and raise raisin five. You need to add one more point (the previous move added four, but you want to tally five), so now lower raisin one, carry to raisin two by lowering raisin two, and carry to raisin three by raising it. Now raisins three, five and six are up, which means you have 52 points.

Tragically, my friend Mark was killed on September 11th while working on the 96th floor of the World Trade Center, the last time the world turned upside down and we were reminded to take nothing for granted. Comforting and nostalgic memories of Mark come to me at random times. Sometimes I have dreams about meeting up with him, even close to two decades after I last saw him. As 20-year old chavrusas (study partners) we would sometimes talk about whether the vast sea of Talmud really could be mastered, it was so large and complicated. As I slowly work on that project on my own now, I sometimes think about those early conversations and wonder what Mark would think about my progress. When I took up swimming a few years ago I pictured him alongside me, since we used to swim together when we were students at Yeshiva University and he challenged me never to miss our daily swimming regimen.

Isolated from everyday life, I’m finding myself these days reaching out to many old friends. It feels good to connect with them during a time when, no matter how separated our lives have become, we are able to reflect on something that we are all going through. We talk as if time hasn’t passed, continuing conversations as if we had been in camp together or dorm roommates just yesterday.

I imagine that I would have reached out to Mark these days to see how he’s doing and catch up. I would probably have told him that I played Scrabble on Shabbat and kept score in binary, and that my kids loved it. He would have said that it’s only natural to keep score in base-2 and we would have picked up right where we left off, the last time we were together.

About the Author
Rabbi Shlomo Weissmann, Esq., has served as the Director of the Beth Din of America, the most active rabbinical court in North America, since 2008. In this role, he utilizes both his secular and Jewish legal expertise to manage all aspects of the Beth Din’s activities, and to oversee a forum for dispute resolution that seamlessly integrates the Jewish jurisprudential tradition with secular norms of procedural due process. Rabbi Weissmann also serves as a mediator and arbitrator at the Beth Din, and has mediated and arbitrated over 100 cases since joining the organization. Rabbi Weissmann is a frequent speaker on topics relating to religious arbitration, and has delivered lectures at law firms, law schools, religious institutions, and universities. Prior to joining the Beth Din of America, Rabbi Weissmann served as a commercial real estate attorney at Kelley Drye & Warren LLP, and before that at Day Pitney LLP and Debevoise & Plimpton LLP.
Related Topics
Related Posts
Shlomo Weissmann
Comments