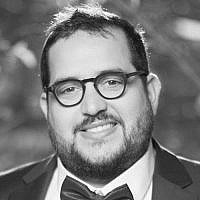 The Blogs
Gabriel Sapir
Apply for a Blog
Please note that the posts on The Blogs are contributed by third parties. The opinions, facts and any media content in them are presented solely by the authors, and neither The Times of Israel nor its partners assume any responsibility for them. Please contact us in case of abuse. In case of abuse,
Report this post. 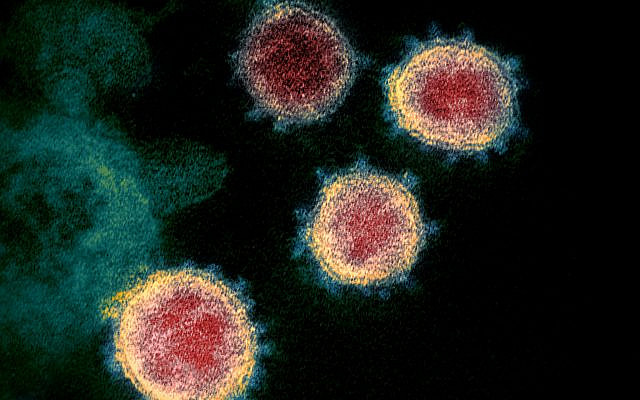 Electron microscope image showing SARS-CoV-2—also known as 2019-nCoV, the virus that causes COVID-19—isolated from a patient in the U.S. Virus particles are shown emerging from the surface of cells cultured in the lab. The spikes on the outer edge of the virus particles give coronaviruses their name, crown-like. (NIAID-RML)

Covid-19 is a new strain that was discovered in late- 2019 and has not been previously observed in humans.  These viruses are zoonotic, meaning they are transmitted between animals and people and found a variety of species. A wet-market in Wuhan (Hubei Peninsula in China), where live animals (e.g. pangolins, bats, dogs, frogs, wild cats, etc.) are juxtaposed with circulating passer byes and other readily available food items for immediate consumption was the initial epicentre of this global pandemic. The high volume of people circulating in these markets, coupled with poor hygiene practice (i.e. hand-to-mouth, exchange of body fluids), and the consumption of raw, half-cooked, and contaminated meat seems to be the likely reason why Covid-19 crossed the species-barrier and started infecting humans in the later months of 2019.

Once the cross-species barrier was crossed, the local population (and later humanity) became susceptible to infection by Covid-19. Initially, governments moved to contain the virus by closing borders to specific countries in Asia where local epidemics unfolded. Lately, as of 11 March 2020, Covid-19 evolved into a global pandemic, where it became prevalent across several countries, affecting large swathes of the global population, with person-to-person transmission and circulating within communities, thus bringing the world economy to its knees and unprecedented, worldwide travel restrictions. Common signs of infection include respiratory symptoms, fever, cough, shortness of breath and breathing difficulties. In more severe cases, infection can cause pneumonia, severe acute respiratory syndrome, kidney failure, ultimately death. Standard recommendations to prevent infection spread include regular hand washing, covering mouth and nose when coughing and sneezing.

About 80% of cases will be asymptomatic or show mild symptoms and recover within a short period of time. However, another significant percentage of cases – particularly the elderly population and in those with pre-existing medical conditions it can prove dangerous, leading to multi-organ failure and death. Some of these conditions include: heart disease, diabetes, hypertension or chronic respiratory conditions, as well as those on chronic steroid therapy (i.e. because of immune-suppression) and chemotherapy agents. Treatment for those with severe cases is heavily dependent on critical care beds, mechanical ventilation and other life support in a critical care setting. Elderly, in-patients will be at the increased risk of opportunistic infection during hospital admission, forming a perfect storm.

It is widely acknowledged that a large percentage of the population will, at some point, be infected by Covid-19. To that extent, Germany’s Chancellor Angela Merkel warned earlier last week that up to 70% of the country’s population – approximately 58 million people – could contract the virus. In a similar vein, whilst accompanied by the UK’s Chief Medical Officer, Prime Minister Boris Johnson stated that up to 1/5 of the its workforce may be off sick during the peak of the epidemic in the UK, and that 80% of Britons could catch Covid-19 in the worst-case scenario of a major outbreak. He stated ‘many families will lose their loved ones before their time’ in a sombre announcement from London.

Crucially, the question of when the population is affected is vital: if we spread out the occurrence of cases, then hospitals, physicians and ambulance services will be fully capable to manage the number of cases and, chances are, we will be able to provide the highest possible standard of car to those with greatest need. Alternatively, if left uncontrolled, Covid-19 in wide circulation in our communities, our health system will collapse, without enough hospital beds, mechanical ventilators, nurses, doctors or emergency services capable to cater to the number of critically ill patients.

This is a scenario that must be avoided at all costs. Please refer to the passionate and impressive article written by Dr. Yair Schindel, M.D. here, where a comprehensive strategy entitled ‘Honor your Father and Mother’ is outlined, advocating those above 70 to be brought to isolation throughout the country, for a period between 4-8 weeks starting ASAP, as a protective measure.

2. The Need to Educate about COVID-19’s dangers (whilst acknowledging knowledge gaps and unknown medical variables)

Colds and the typical Flu are very common illnesses, particularly in the winter. How is Covid-19 any different? -The effects of Covid-19 have been downplayed by world leaders, conspiracy theorists, and by those moved by a mixture of ignorance and recklessness, understating the gravity of  this global pandemic.

Importantly, up to this point, we do not understand the behaviour of Covid-19 and how its transmission dynamics will be affected, for example, by the warming of temperatures as spring or summer arises. We are yet to understand whether this virus, in the northern hemisphere, behaves seasonally like the seasonal flu virus, which decreases in incidence (e.g. number of new cases) as spring/summer arrives. Alternatively, Covid-19 could potentially behave like MERS – another member of the coronavirus family – which withstands even the high temperatures of the Arabian Peninsula. For countries in warmer and more humid climates, we are yet to find out whether the cooling down of temperatures will usher in an increase in incidence, or even whether the humidity will counter-act the spread of air-borne virus droplets, thus reducing person-to-person transmission. In short, we are unaware whether the pandemic dynamics will change with seasonality, a vaccine is potentially a year away and targeted treatment options still unavailable.

Even in best case scenario, the flu vaccine is relatively weak compared with other vaccines — offering around 60% protection (when it is well-matched to circulating strains) and 30% or less when there is a high degree of viral strain variability from one season to the next. Although it is not highly effective, the flu vaccine helps build ‘herd immunity’, which prevents or at least slows disease spread, and often reduces symptom severity. That is potentially an achievable goal with a Covid-19 successful vaccine candidate. In term of therapy, clinical trials are currently underway. to shorten the duration of illness and reduce symptom severity. Even if anti-viral medication is less effective antibacterials, an attenuated Covid-19 case may reduce the need for intensive care and reduce the risk of death in admitted, critical care patients.

The Israeli government has widely adopted measures to prevent circulation of people – whether by requiring isolation for 14 days for travellers, prohibiting the gathering of 10+ individuals, the widespread closure of schools, nurseries, entertainment and leisure centres. Some initially have argued these were draconian measures. Were they justified?

No. The strategy adopted by the Israeli government (and its associated institutions such as the Chief Rabbinate) and local governance authorities has been comprehensive, timely and will prove effective. The strategy attempts to delay the spread the number of Covid-19 infections, thus preventing an overwhelming reliance on the tertiary public health system in Israel with an unprecedented, large number of critically- ill patients. Everyone has a crucial role to play in such an effort by enacting social-distancing measures, including avoiding handshakes, kisses, and any social contact, keeping 2 meters away from each other, preventing the gathering of 10+ people, limiting number of visitors to the domicile, by promoting frequent hand washing, thorough cleaning of surfaces such as door handles, credit cards, keys, wallets and cell phones, etc.

This is an unprecedented approach that will inevitably change the way we understand Jewish religious communal life as whole, particularly in Israel, including the limitation of large prayer quorums, even with the upcoming Pesach holiday / Shavuot and possibly Rosh Hashana and Yom Kippur, where attendance to synagogue and prayer life is typically higher. As to the secular way of life: it will mean avoiding the beach, parties, discos, coffee life and entertainment as a whole. These are harsh, but extremely necessary measures, but they will  ultimately, inevitably save lives and preserve families together with their beloved ones.

Unlike any other public health situation in the past, these measures will require from us, Israelis – whether politically or non-politically engaged, religious or non-religious, Jewish, Arab and Christian, alike – fast adoption and comprehensive, long-lasting compliance.

As a way of example, when designing preventive public health campaigns to the general population – as it is typically the case in chronic diseases such as diabetes or heart disease – the most effective and (incidentally) less successfully adopted solutions are precisely those tackling the need for societal behaviour change (e.g. whether greater physical activity, eating more vegetables, reducing saturated fats, smoking cessation, etc.). That is tentatively explained because in the absence of immediate reward mechanisms, we tend to procrastinate adopting these measures to enact immediate behaviour change. Covid-19 poses a more emergent threat, unlike other public health security issues the State of Israel has ever faced, because it is a highly effective infectious disease with fast, potentially exponential spreading. Thus, the adoption of social distancing measures and comprehensive behaviour change, which are likely to drastic reduce the number of cases, need to be vastly applied, and complied to, across the societal spectrum, in a short period of time.

This is particularly sensitive and relevant to Israel due to the fact that our society is evidently stratified by a range of nationalities, education level, languages, cultural attitudes, levels of religious observance, etc. That adds an additional layer of urgency: the need to design health promotion messaging across different strata of our society, and do it fast, through a multiplicity of omni-channels.

I have full confidence that with the help of HaKadosh Baruch Hu, we will pull through this situation together, for Israel is ‘a land that Hashem, your G-d, seeks out; the eyes of Hashem, your G-d, are always upon it’ (Devarim 11:12). And “All Israel have a share in the World To Come, as it is stated (Isaiah 60:21): ‘And Your people are tzadikkim (righteous).’ They shall inherit the land forever. They are the branch of My planting, the work of My hands, in which I take pride.” (Sanhedrin 90a).

About the Author
Dr. Gabriel Sapir is a medical doctor and strategic consultant in Biotechnology. He has a Master's in Global Health Sciences, Health Economics and International Development. Born in Brazil, he lived in the US, UK, Germany and Switzerland before moving to Israel where he now resides with his wife, Hannah. He contemplates life from the hills of Judah, in Efrat; loves Moroccan fish and Mujadarrah.
Related Topics
Related Posts
Comments