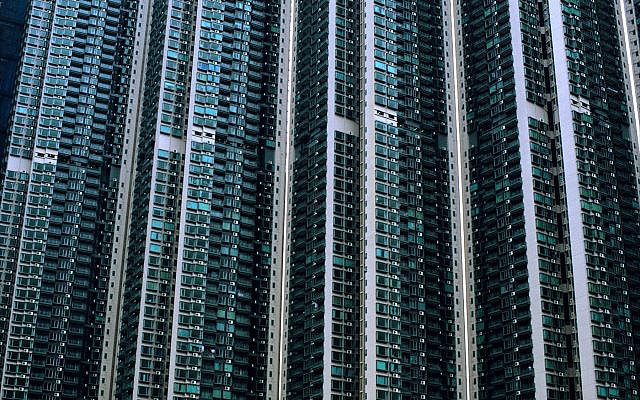 Residential skyscrapers in Hong Kong, whose 7.4 million people make it one of the world's most densely populated areas. Yet as of April 30, Hong Kong reported only 1,038 infections and four deaths from COVID-19. (Larry Luxner)

South Korea has tested a larger percentage of its citizens for COVID-19 than any nation on Earth. Densely packed Hong Kong, despite its proximity to the rest of China, has seen only four novel coronavirus deaths to date.

Singapore, long-known for its focus on cleanliness and its police-state mentality, had been doing an exemplary job until just a few weeks ago, when infections began spreading rapidly among the city-state’s migrant population — yet the death count still remains at only 14.

And in crowded Taiwan — despite its exclusion from the World Health Organization (WHO) at China’s behest — COVID-19 has claimed only six of the island’s 23 million inhabitants.

Clearly, Israel has plenty to learn from these four so-called “Asian tigers” when it comes to fighting the coronavirus. 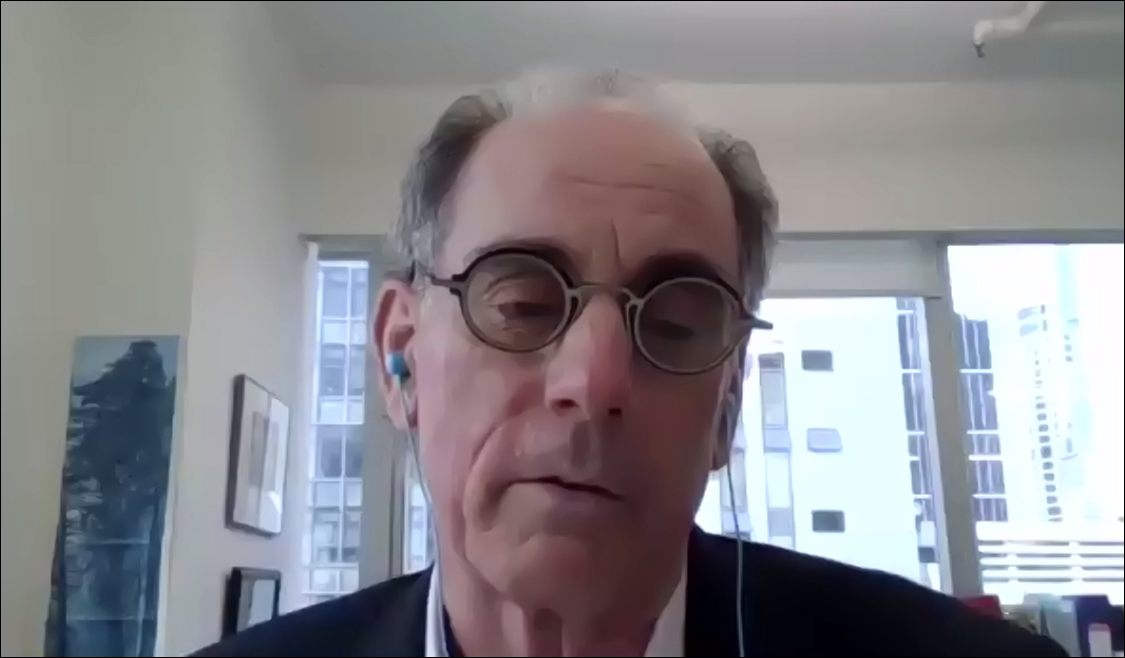 “It’s extraordinary how these countries, along with Japan — all of which have very different cultures, and some with high smoking and obesity rates — have such a low number of deaths from COVID-19 so far,” said Mark Clifford, executive director of the Hong Kong-based Asia Business Council. “These countries also tend to be racially homogenous, and there’s a strong sense that in a time of crisis, people will pull together and sacrifice individual freedoms for the good of society.”

Clifford spoke during an April 27 webinar hosted by the Israel-Asia Center, a Jerusalem-based nonprofit organization. Joining him was Gedaliah Afterman, head of the Asia Policy Program at IDC Herzliya’s Abba Eban Institute of International Diplomacy.

The discussion, moderated by Rebecca Zeffert, founder and executive director of the Israel-Asia Center, comes as the number of total confirmed COVID-19 infections throughout the world nears 3.2 million, and reported deaths exceed 226,000.

Israel ranks 24th on the list with 15,782 confirmed cases — right behind Mexico and just ahead of Singapore. With 212 deaths for a population of 9.2 million, the Jewish state is doing relatively well. 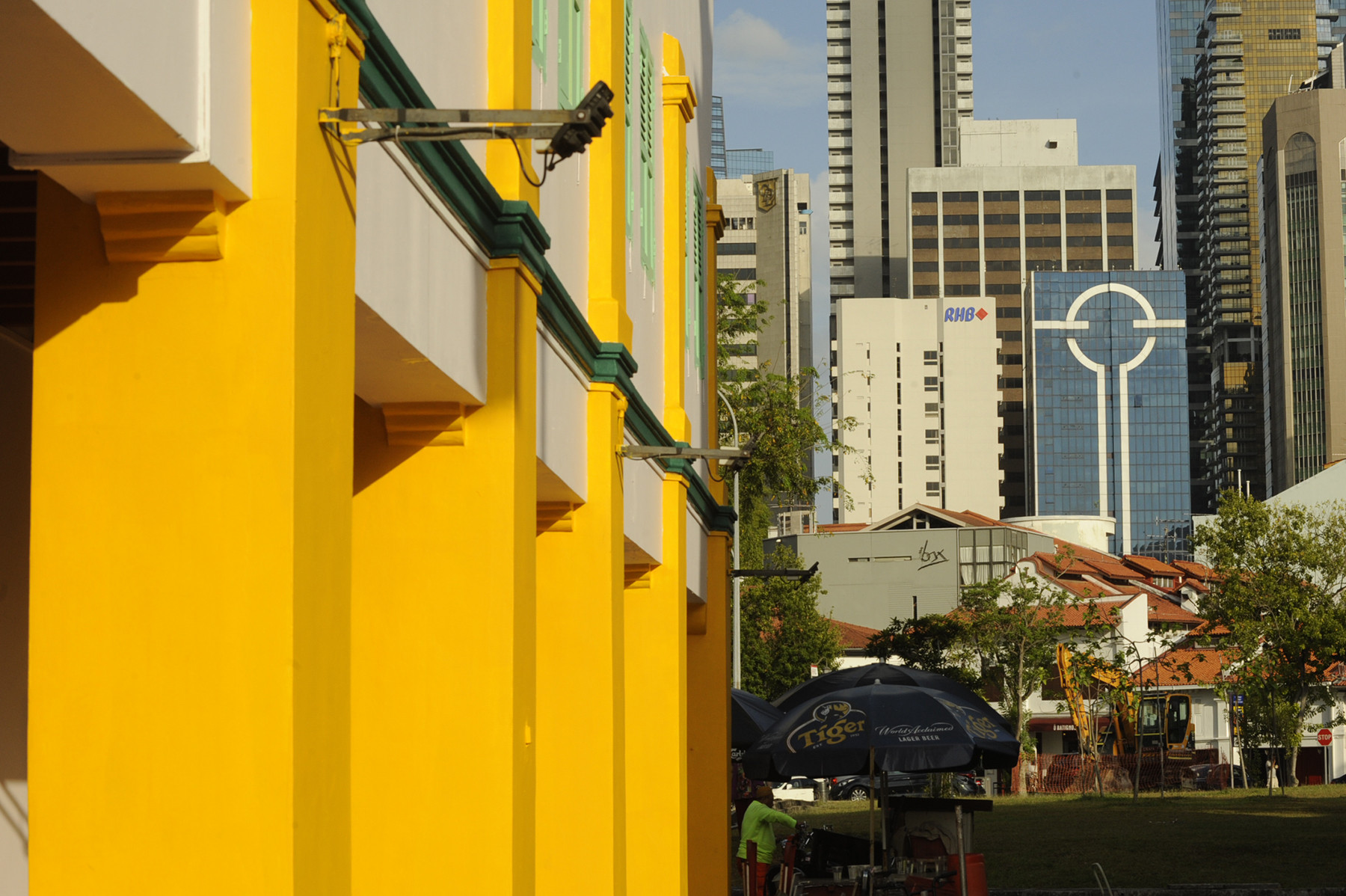 Apartment buildings in Singapore, a city-state whose 5.7 million inhabitants put a premium on cleanliness, order and rule of law. (Larry Luxner)

“In some ways, Israel applied extreme measures — like a lockdown, flight cancellations very early on, and emergency measures to control the situation — that have definitely paid off,” said Afterman, a China expert and former advisor at the Australian Embassy in Beijing.

“The problem is that Israel wasn’t prepared for the pandemic, even though we had a few months to watch what was happening in Asia,” Afterman continued. “Everyone was looking at Wuhan, but we didn’t act because we thought it would never happen to us. That’s the source of many of the issues we’re facing now. We have emergency measures in place, but we don’t have any clarity looking forward.”

Israel has ‘a lot of insight to gain’

Clifford moved to South Korea in 1987 as a correspondent for the Far Eastern Economic Review, and relocated to Hong Kong in 1992, where he served as an editor at BusinessWeek and the South China Morning Post. He’s written several books on the region including Through the Eyes of Tiger Cubs: Views of Asia’s Next Generation. 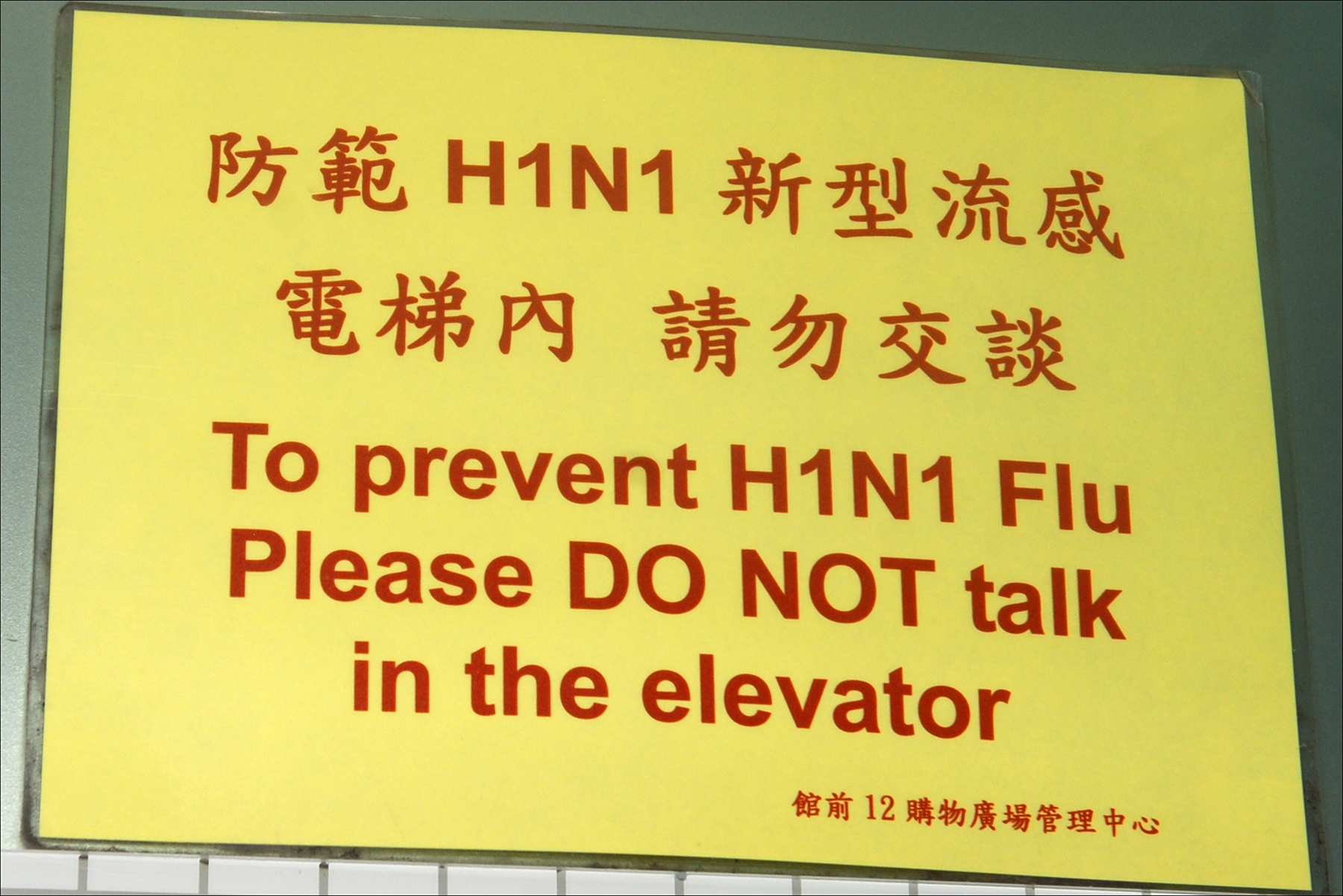 Bilingual sign in Taipei, Taiwan, discourages people from talking in the elevator as a precaution against H1N1 flu. (Larry Luxner)

“These are all pretty wealthy places, and they all have good public health systems, so they are able to put resources into the problem,” he said, noting that South Korea, Hong Kong and Singapore rank at the top in terms of per-capita testing rates. “If you can’t measure something, you can’t really see the problem, let alone fix it.” 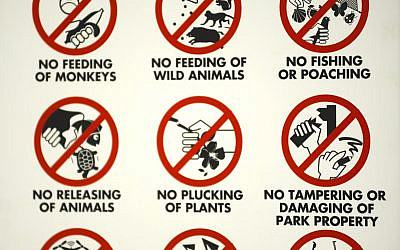 The United States, by comparison, has a public health system that’s “failing abysmally,” especially in hard-hit cities like New York.

Clifford said that the outbreak of severe acute respiratory syndrome (SARS) in 2003 had a lasting effect on Hong Kong, noting that “people here are much more likely to wear a mask when they’re sick so they don’t infect others. There’s also a focus on good hygiene habits and washing your hands.”

That’s also why, he said, “when we started hearing reports of what was happening in Wuhan, people immediately swung into action.”

The South Korean government announced today, April 30, that it had reported no new domestic coronavirus infections for the first time since February. And Vietnam, a communist country of 95 million that borders China, has seen only 270 confirmed cases of the virus and not a single death since the beginning of the outbreak.

Afterman insisted that Israel must improve official contacts with China while opening more channels — both official and academic — with all Asian nations. 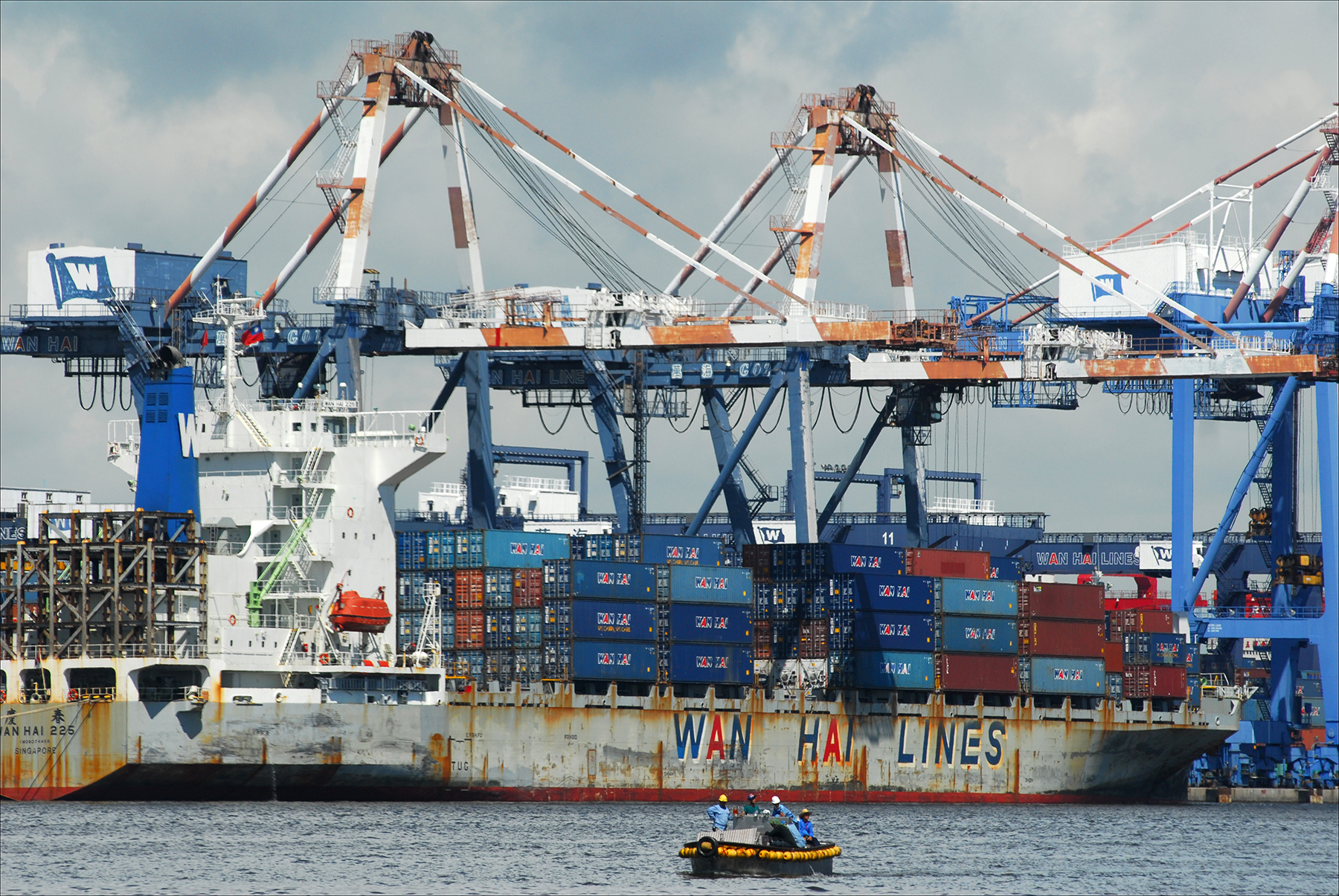 “We have an opportunity to learn from Asia, because these countries seem to be dealing with the situation very well, and they’re a few months ahead of us,” he said. “Israel should cooperate actively with them, from legislation and policy issues to technology. We have a lot of insight to gain.”

He pointed out that “in the end, most of the relevant equipment came from Asia. That’s something to keep in mind.”

Asked how the coronavirus pandemic would ultimately affect Israel’s trade with the four Asian tigers, Afterman said it depends how quickly their economies recover from the shock.

“Generally speaking, this will have a positive effect,” he said. “In some ways, the epidemic has highlighted not only China but other countries like South Korea. We do talk about them in Israel, but they’re not really at the front of the list. So this could ultimately lead to growth in Israeli trade with these countries.”

WHO politics and tanking economies

Not so fast, warned Clifford. 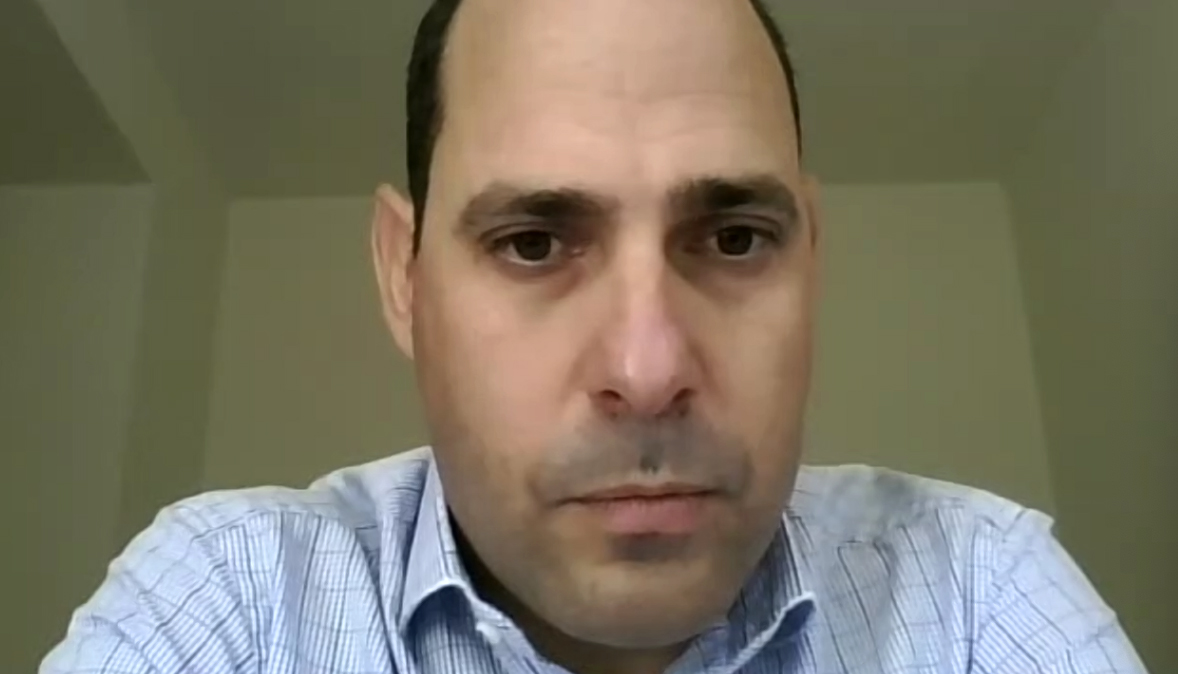 He said China must be held accountable for prohibiting the World Health Organization from cooperating with Taiwan — which Beijing considers a breakaway province — even though the Taiwanese have managed to record the lowest number of cases per million people anywhere in the world over the past 50 days.

According to a Council on Foreign Relations report, Taiwan alerted the WHO on Dec. 31 about the potential of the new coronavirus for human-to-human transmission, but never received a response. Instead, “the WHO endorsed China’s denial of human-to-human transmission until Jan. 21. While the WHO appeared to downplay the global threat, Taiwan adopted vigorous measures for screening, testing, contact tracing and enforcing quarantines. These measures were aided by technology and big data.”

Indeed, said Clifford, “I give China credit for being a lot more open that it was during SARS in 2003. But it’s unfortunate that even at this time, politics intrudes. It’s sad to see a neighboring economy being shut out of the WHO for political reasons.”

For now, he said, Hong Kong is collaborating heavily with Beijing on fighting COVID-19, despite a deep level of mistrust of China by the residents of this former British colony. 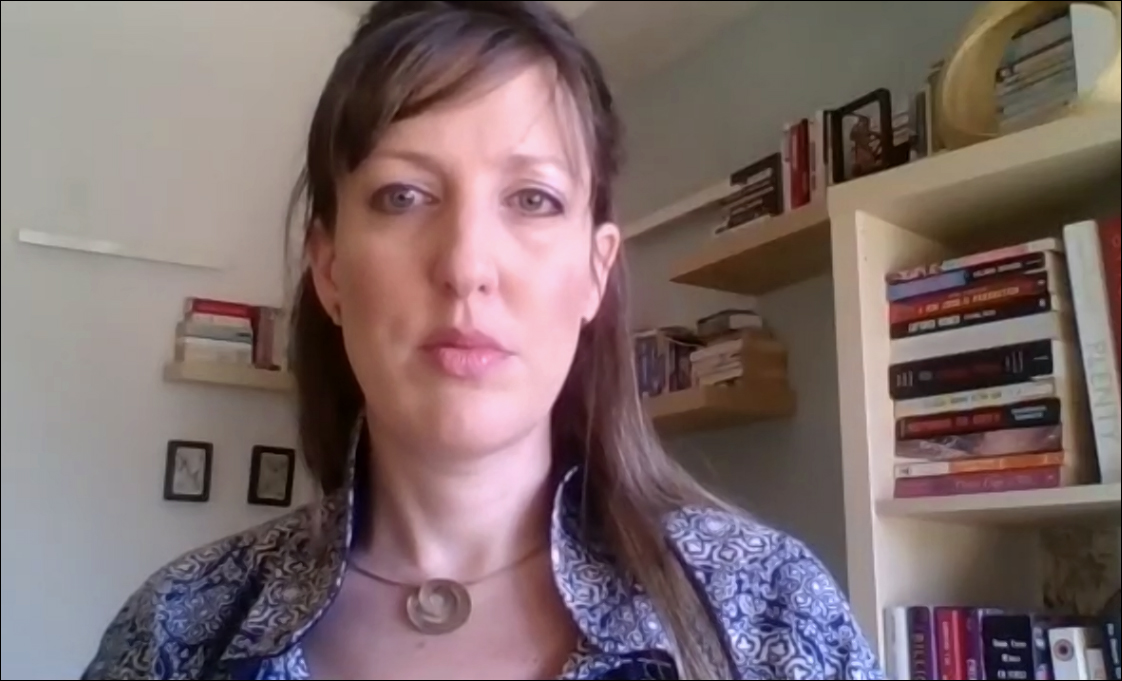 “There’s a major war going on over control of this narrative. We don’t know how it’s going to end. I think China is going to come out of this a bit bruised and wounded,” Clifford said, citing the end of nearly half a century of rapid GDP growth in China.

It’s no surprise that the Chinese economy is projected to grow by only 2.5% this year due to the coronavirus — marking its worst performance in 44 years. And China’s among the lucky ones; the U.S. economy shrank by 4.8% in the first quarter of 2020, with second-quarter growth expected to drop by a frightening 38%.

Likewise, the Bank of Israel now predicts this country’s GDP will contract by 5.3% in 2020.   Unemployment has already shot up from a historic low of 3.4% in February to a record 26% today.

“The world economy is undergoing a collapse. There’s going to be a lot of losers, and it’ll be a lot harder to raise capital,” Clifford said. “On the other hand, we’re so focused on medical research, and look, we’re using Zoom. Its growth has been like nothing any tech platform has ever seen before. There will be hundreds, if not thousands, of new technology companies that will get opportunities much faster than they would have otherwise. This will accelerate the transformation of the digital economy and could result in some reshuffling — hopefully for the better.”