As a member of the Council of the Wolf Foundation, I had the honor of welcoming the 2015 Wolf Prize Laureates at the Wolf Foundation Summit, on Thursday, May 28th. At this Summit conference at Eretz Israel Museum in Tel Aviv, the laureates presented their creative work to a large responsive audience.

On Sunday, May 31st, the Wolf Prizes were awarded by the President of Israel at the Knesset. I was privileged to participate as a Council member.

The Wolf Prize in the sciences is considered second in importance to the Nobel Prize, with more than a third of recipients going on to win the Nobel. In the arts, it is regarded as the most important award. In agriculture, mathematics, and the arts where there is no Nobel Prize, the Wolf Prize is the most prestigious award.

Below is the Torah Tweets artblog project post of a previous Wolf Prize ceremony. See all the photographs for this week’s Torah portion and the entire year’s posts at the “Creating a Spiritual Blog of Your Life” blog http://bibleblogyourlife.blogspot.com 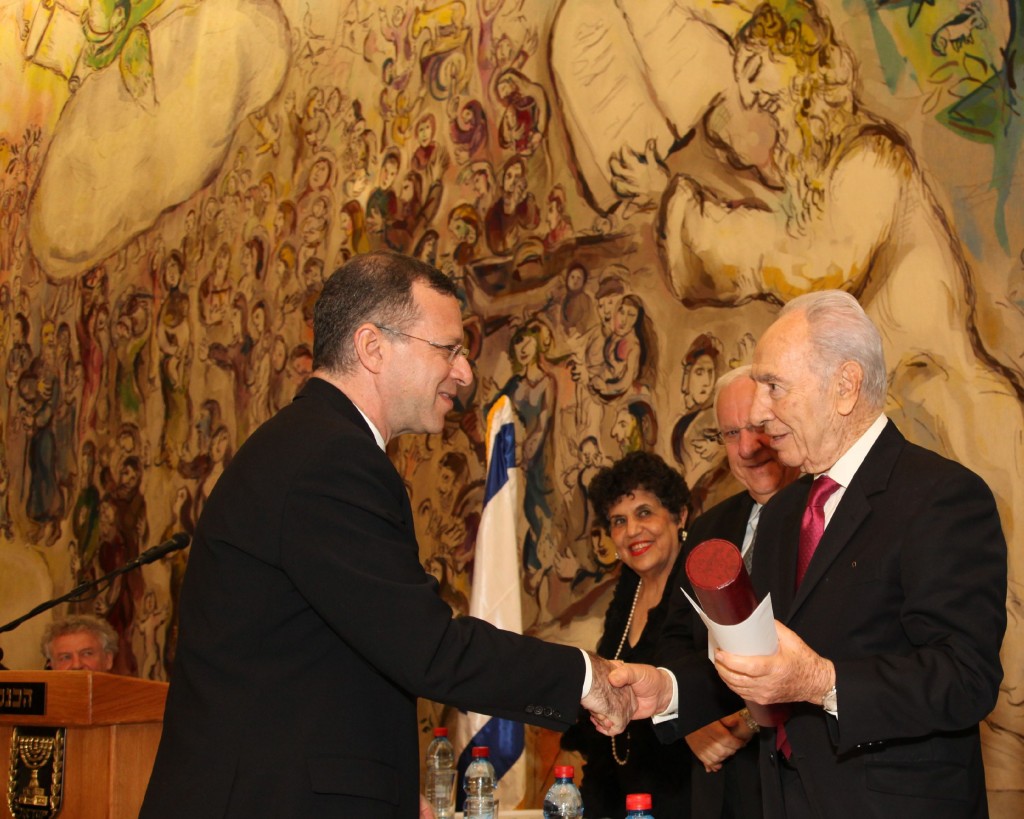 When you light the lamps, the seven lamps shall illuminate the face of the menorah …. This is the workmanship of the menorah, hammered from a single piece of gold from its base to its flowers. (Numbers 8:1, 4)

The menorah, symbol of the Jewish people since ancient times, adorns the entrance to the Knesset and is the seal of the State of Israel.

We participated in the annual award ceremony at the Knesset honoring the world’s best scientists and artists with the coveted Wolf Prizes.

Mel was appointed to the Council of the Wolf Foundation by the President of Israel on recommendation of the Minister of Education.

Later in the week, we participated in the International Conference on Art, Science and Technology in the Galilee city of Karmiel.

Mel illuminated worldly wisdom with Torah insights in his lecture on a kabbalistic model of creative process in art and science.

Dr. Eugene Katz, of the Institute for Desert Research lectured on bridges between mathematics, natural sciences, art and architecture.

His research on solar energy at Sde Boker created a solar panel menorah tilted up towards the sun to generate electricity to light up homes.

Integral interconnectedness of all branches of knowledge is symbolized by the menorah being hammered from a single piece of gold.

The menorah’s branching form joins the spiral form of the Torah scroll to represent Judaism as living systems like flowering trees and DNA.

At the Knesset dinner, we sat with California Prof. Harris Lewin who was awarded the Wolf Prize for his contributions to animal genetics.

In his acceptance speech, he related how his interest in the genetics of cows was sparked by his work with them on a kibbutz when he was 17.