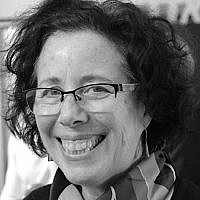 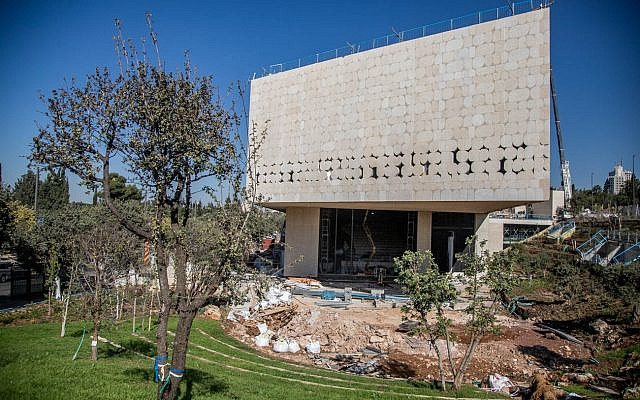 Landscaping encompassing the new National Library of Israel construction zone – an unusual sight to see, as landscaping is usually the last stage before a building is completed. Photo: Albatross

The year 2022 marks a brand new beginning for the National Library of Israel as the new Library building and campus, nears completion. Over the past year, the structure, designed by noted architectural firm Herzog & de Meuron, has emerged as a stunning addition to the Jerusalem cityscape.

Further to the magnificent building, the surrounding gardens and statuary will be an attraction in themselves. Specially selected plants and trees, native to this region, celebrate Israel’s rich, varied vegetation, while the landscaping and winding trails reflect the natural terracing characteristic of Jerusalem.

Yet, oddly enough for a construction site, although the building is still being finished, the surrounding gardens, including the Idan and Batia Ofer Park, have already been planted. Landscaping is usually the final stage, but in the Land of Israel, shmita, the Jewish agricultural sabbatical, must be taken into account.

During shmita, all agricultural activity is forbidden by Jewish law. Therefore, the landscape architects raced throughout the summer to prepare the gardens before the advent of the Jewish New Year. And so, passers-by are treated to the lovely if unusual sight of flourishing plants and budding trees encompassing a construction zone. 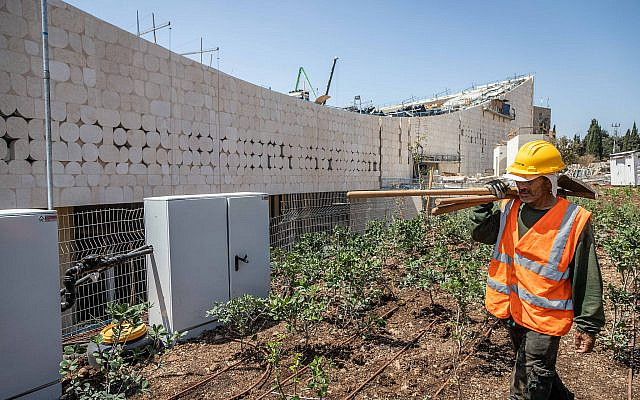 Landscapers worked throughout the summer on the gardens, including the Idan and Batia Ofer Park, to “beat the clock” before the advent of the shmita year. Photo: Albatross.

The Library found a solution to its specific planting challenge by beating the countdown to shmita. More generally, however, how does Israel honor Tu B’Shvat – the Jewish Arbor Day – in those years when planting is forbidden?

In 2008, the Knesset passed a law concerning the Sabbatical year, according to which a National Shmita Commission would refer questions concerning the laws of shmita to the Chief Rabbinate of Israel. The Chief Rabbinate then issued shmita guidelines for KKL-JNF, which carries out handling and management of forests on behalf of the government. During shmita, according to these guidelines, there is no ceremonial tree planting (other than special exceptions at sites where planting has been preapproved by the Chief Rabbinate), no public tree plantings with schoolchildren or tourists, and no distribution of saplings.

These dismal directives are offset by positive and proactive actions to engage in continued preservation and upkeep of existent forests, including pest and disease control as well as the all-important business of fire prevention measures. In lieu of Tu B’Shvat tree-plantings, schoolchildren will be able to participate in activities ranging from forest clean-ups to preparing saplings that will be seeded, transplanted, and potted on special soil-free substrates, unconnected to Mother Earth, and therefore not planted.

Celebrate with a Seder 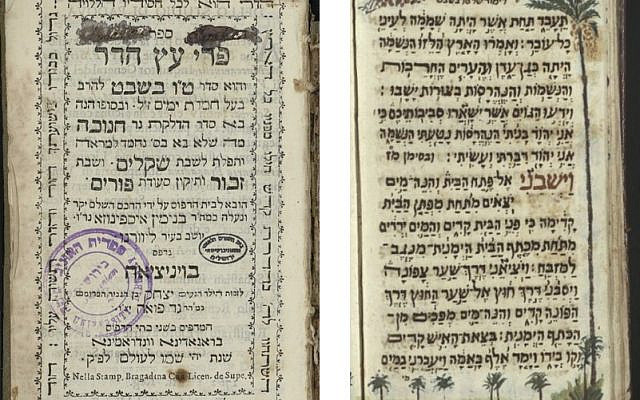 The modern-day tree-planting festival of a “Jewish Arbor Day”, notes Rabbi Dr. Zvi Leshem, Director of the Gershom Scholem Collection for Kabbalah and Hasidism at the National Library of Israel, is a part of the Zionist enterprise. A Tu B’Shvat Seder was the more traditional – and mystical – way of celebration.

This tradition was started, perhaps sometime in the 18th century, by followers of the 16th-century kabbalist Rabbi Isaac Luria (also known as “Ha’ARI Hakadosh”). These disciples created a festive meal with prayers, readings, and eating the seven species of grains and fruits native to the Land of Israel: wheat, barley, grapes, figs, pomegranates, olives, and dates, as well as drinking four cups of wine.

Leshem says, “A common misconception is that the Seder Tu B’Shvat originated with a little booklet from 1762, Pri Etz Hadar, which took the custom from the book Hemdat Yamim, which was published in 1731. But Hemdat Yamim was thought to be Sabbatean [of the followers of the false messiah Sabbatai Zvi] and therefore suspect. However, in my research, I discovered an earlier source, Birkat Eliyahu, from 1728, which is pre-Hemdat Yamim and also mentions Ha’ARI, and so there’s an ante-Sabbatean version, too.”

The ceremony spread throughout the Jewish world with Seders held everywhere from Italy and North Africa to Oman and Persia. Its popularity, however, was superseded in the 19th century with tree-planting in the Land of Israel, and – because you can’t keep a good mystic tradition down – it was revived in the latter 20th century.

Leshem says, “I truly think I participated in the first Seder Tu B’Shvat that the vegetarian Jews in the Upper West Side of New York started in the mid-70s. Within a short time, it spread like wildfire and became super-popular among all the denominations.”

In Israel, the non-kabbalistic Seder Tu B’Shvat was revived by Israel Prize-winner Nogah Hareuveni, founder of the biblical nature reserve known as Neot Kedumim. Leshem notes that in recent years the Israeli versions “have become more elaborate, often including the Pri Etz Hadar list of 30 fruits with Zoharic readings.” 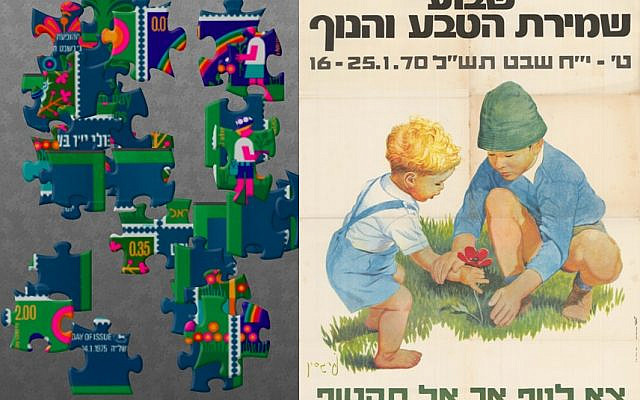 The National Library of Israel website offers educational resources, from lesson plans and photos to puzzles to posters, to learn from and enjoy.

Like the JNF-KKL, other organizations are also focusing their Tu B’Shvat activities and educational efforts this year on ecology, sustainability, and community.

The Library is no exception. NLI’s Education Department has a pack of educational resources to help expose students to different aspects of Tu B’Shvat, including lesson plans, posters, newspaper articles, photos, activities, puzzles – plus, the thing kids love most: a Kahoot quiz.

NLI’s website, too, has a special page dedicated to all things Tu B’Shvat, from historic photographs to musical recordings piyyutim (liturgical hymns), Hebrew melodies, and ethnographic recordings of a Hasidic Tu B’Shvat tish, and of a Seder Tu B’Shvat.

While circumstances of shmita may prevent tree-planting activities this year, they have conspired to create a happy accident whereby, by the time the Library opens in fall 2022, the trees, plants and flowers will be in full bloom. These will be fully accessible to Library visitors who will be able to enjoy the gardens, enter the building, view galleries, sit and study in the reading halls, listen to recordings and songs, examine original documents, participate in educational programs, and – after a year of lying fallow – celebrate new beginnings. 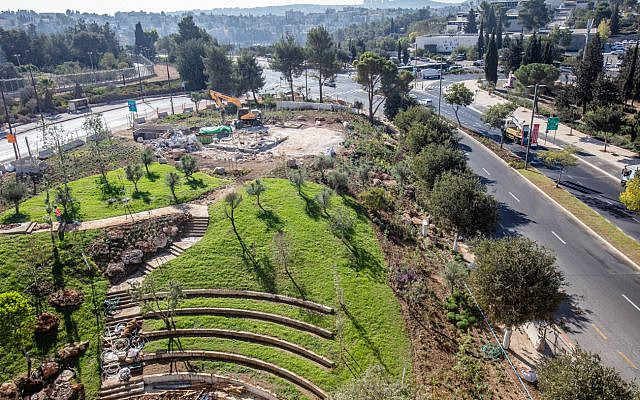 Landscaping encompassing the new National Library of Israel construction zone – an unusual sight to see, as landscaping is usually the last stage before a building is completed. Photo: Albatross

About the Author
Rachel Neiman is an experienced media professional whose journalism credits include ISRAEL21c, Globes Online, The Jerusalem Post and LINK magazine. She has served as marketing communications director at several Israeli innovation-based startups, and is now happily ensconced at the National Library of Israel.
Related Topics
Related Posts
Comments