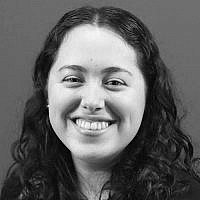 The Blogs
Jennifer Weinstein
Apply for a Blog
Please note that the posts on The Blogs are contributed by third parties. The opinions, facts and any media content in them are presented solely by the authors, and neither The Times of Israel nor its partners assume any responsibility for them. Please contact us in case of abuse. In case of abuse,
Report this post.

As we approach Tisha B’Av, the saddest day of the Jewish calendar, I and many Jews around the world are reflecting on what it means to have lost the Beit Hamikdash, the center of Jewish life and ritual.

It is almost impossible to comprehend how much we as a people have lost with the destruction of the First and Second Temple. Not only was it a palpable way to feel Hashem’s presence and a place to serve Him, but it was also the center of Jewry at the time, a place which unified Jews from all over, something we surely need today.

Last year on Yom Yerushalayim, the 50th anniversary of Jerusalem’s unification, my seminary trekked up Har Hazeitim to an overlook of Jerusalem. As I gazed at Jerusalem from afar, each building was just a speck of light in the distance, but together they formed a luminous skyline. It was an awe-inspiring and breathtaking sight.

As we looked at the spot where the Beit Hamikdash once stood, I closed my eyes and imagined that it was still there and that Jews from all over the world gathered there for their mutual service of Hashem. A few moments passed and I opened my eyes to reality: that the Beit Hamikdash has been gone for so long that the full magnitude of losing the Temple has been lost on most Jews.

Since elementary school, I have been taught the infamous story of Kamtza and Bar Kamtza, the individuals who bear the blame for the destruction of Jerusalem in 70 CE. No matter how the story is told, it always with the same message: that the Beit Hamikdash was destroyed because of sinat chinam, baseless hatred. It is a sad yet all-too-familiar tale of two brothers, so to speak, who are blinded by hatred.

It is of great significance that it was the actions of two members of the Jewish people who caused the collapse of our own Temple. The Jewish people turned on one another. We were no longer a united nation, and therefore we did not deserve Hashem’s presence.

According to Rav Kook, the only way to be deserving of building the Third Temple is to reverse the sin that caused us to lose the Second Temple. That is, we must turn baseless hatred into baseless love. We as a nation must come together and love one another for the simple fact that we are a part of the Jewish family. Now more than ever, with rising tensions between Diaspora and Israeli Jews, this may seem impossible but therefore it is so unbelievably necessary.

Creating baseless love is no simple task. It may seem unattainable to love someone solely based on shared Jewish heritage. However, we should interpret Rav Kook’s idea as bringing about acts of love rather than feelings of love. Acts of love can create tangible change within the Jewish people.

Giving is the ultimate act of love. The simple act of giving demonstrates one’s love as well as produces more love for the recipient. Giving forms an authentic connection between provider and receiver. It has the power to unify the Jewish people.

We must create ahavat chinam in this world via giving. Through giving to Jewish individuals and charities, we improve the lives of others and create a sense of unity amongst world Jewry. Giving is our path to generating baseless love and eventually bringing the Third Beit Hamikdash.

In the Kuntres HaChesed, it states that, “The only Jew who is a stranger is one to whom you have not yet given.” Let us seek out all those who are strangers.

About the Author
Jennifer Weinstein is an intern at Jgive, a non-profit helping other non-profits in Israel via crowdfunding. She lives in Westchester, NY and is currently a sophomore at Binghamton University.
Related Topics
Related Posts
Comments