We’ve just completed an intense period of mourning culminating in Tisha b’Av, a day that forces us to contemplate the wreckage we create if we fail in our religious, moral, and ethical duties.

But Judaism overall is not a religion of pessimism, as Rabbi Jonathan Sacks often points out in his books and speeches. It is in fact remarkably optimistic, especially given the many tragic occurrences that mark our long history. That fact is apparent in the haftarah we’re to read this Shabbat, famously known as Shabbat Nachamu, the Shabbat of Consolation. The day is named for the haftarah reading from Isaiah, which begins with the tender and loving words the prophet speaks in God’s name: “nachamu, nachamu ami,” “be comforted, be comforted my nation.”

The nation’s punishment — the destruction of the Temple, which was the center of religious and national life — was a severe one, it’s true, but life somehow does goes on. It went on for us as a Jewish people, and we’re still a part of how the story unfolded: the rebuilding of the Second Temple, its destruction, our long exile, and now a third rebuilding, of the Land of Israel. We have access to Zion once more.

I’ve been thinking a lot about that recently. What does it mean to live with Zion? I was born in Israel, but since I was 5 I’ve lived in the United States. What should living in Zion mean to us Jews who live outside the State of Israel? For many, it means showing support for the country: politically, economically, culturally, and financially, to be sure, and also by visiting as often as possible and developing and nurturing relationships with the people and institutions we love and who are there.

But lately I’ve been mulling a thought about another conception of Zion. When the Temple was destroyed, rabbinic Judaism developed a non-centralized way of practicing our religion, in synagogues, study houses, and even homes. Ezekiel 11:16 predicts this kind of practice, with God telling the prophet: “I have indeed removed them far among the nations and have scattered them among the countries, and I have become to them a diminished sanctity in the countries whither they have gone” (JPS Tanakh). Whether or not we look at this eventuality of a “diminished sanctity,” a mikdash me’at, in a positive or negative light, the fact remains that it provides hope, as Shabbat Nachamu does, that diaspora living and exile do not mean that Judaism or holiness perish. Perhaps it is diminished, but it survives. The Talmud (Megillah 29a) also tells us that God will dwell in the holy spaces we create.

Recently, at the AMIT Teaneck chapter’s summer tea, I spoke about Eichah, Lamentations, doing a close reading of the poetry of the book. But even a cursory perusal of it demonstrates the complete inversion of the natural order that occurs in Jerusalem when the city is destroyed. Zion, or Bat Zion, Daughter Zion, as the city often is called in Eichah, cannot function on any level. Its social, economic, political, cultural, and, of course, religious life are destroyed; its king, priests, warriors, young women, mothers, and elderly all are dead, diminished, enslaved, or exiled. Who can forget one of the most searing images of Eichah, that of a mother who not only can’t feed her children, but is forced to eat them?

In the ancient world, even before Jerusalem became the Israelites’ holy city, there were other holy cities; Babylon and Nippur, both in modern-day Iraq, were two of them. 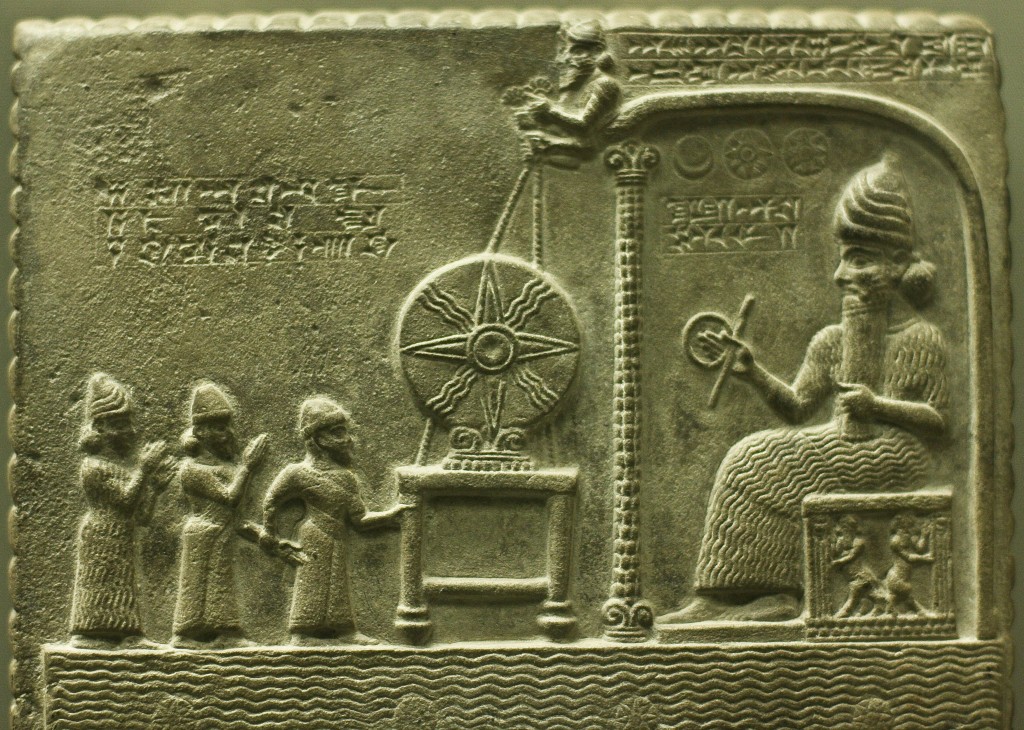 The god Shamash (right, seated) who holds a rod and ring, symbols that he measures out justice

But even non-holy cities were celebrated. Ideally, they were places where justice and order could prevail because of a ruler-king who presided by establishing just laws and fair practices for his citizens. The ruler-king often was under the auspices of a god who meted out justice. For example, the ancient Near Eastern god Shamash often was shown with a rod and ring — an architect’s implements. The god and the ruler-king were to build walls around a city to keep it safe and to launch on other big infrastructure projects, so the city had robust ways to function economically, but these were complemented by laws and practices that provided justice for citizens as well.

Ambrozio Lorenzetti’s 14th-century fresco, The Effects of Good Government, shows the harmony and order, symbolized in part by the ring of dancing young women, that exist in a well-governed city

In his biography of Lincoln, Ronald C. White describes what the president read when he was a young man. Lincoln read through everything he could get his hands on, and that included an American version of Aesop’s Fables, which ended with an explanation of the moral to be learned from each tale. One stayed in Lincoln’s mind: “A kingdom divided against itself cannot stand.”

Which brings us back to the destruction of the Temple, often attributed to in-fighting — brother against brother — in the House of Israel. When we think of that House, now scattered in fragments throughout the world, wondering how to create small holy spaces wherever we are, we can think about what unifies any city: a thriving economy, plenty of infrastructure, and fairness and equity for its citizens, so young, middle-aged, old — indeed, all strata of society — can succeed.

I was honored to speak for AMIT, which is working to educate children from underserved communities in Israel, bringing those in the periphery closer to prosperity. We must do the same in any community in which we find ourselves, scattered fragments that we are.

As the Idea School team works to build the school, we’re meeting with local and state politicians, asking about what our state, county, and district is doing well — Bergen is the first county in the country to eliminate chronic and veteran homelessness, and did you know that 50 percent of our sewage waste is recycled? There’s also, of course, much to improve on: New Jersey has one of the highest opioid addiction rates in the country, attributed to many causes depending on a user’s socioeconomic status, and our infrastructure needs updating and improvement. Our state would be well served by better train service to Manhattan, so millennials might think about moving here. (A Starbucks in some remote locations would help, too, or so I’m told.)

We obviously can debate whether having many mikdashei me’at scattered throughout the world is at all an ideal way to function. There’s a certain poignancy to thinking about that, and a desire to have one unified Zion. But that’s not the reality in which we now live. Rav Kook writes about the fragmenting of light that took place when God created the universe, sending shards of illumination throughout the world, an image not unlike the concept of a fragmented mikdash. Our job is to gather those shards and rebuild in our human and therefore imperfect way, creating something just, and, if we do it right, holy.

Isaiah tells us this is God’s will:

“Is such the fast I desire,

A day for men to starve their bodies?

And lying in sackcloth and ashes?

Do you call that a fast,

A day when the Lord is favorable?

No, this is the fast I desire:

To unlock the fetters of wickedness,

And untie the cords of the yoke

To let the oppressed go free;

To break off every yoke.

And to take the wretched poor into your home;

When you see the naked, to clothe him,

And not to ignore your kin.

I hope we all had a meaningful fast and now can turn to the meaningful work that lies before us, finding the shard of Zion within us and connecting it with those in the rest of the world. Perhaps the shards can become less jagged if we do so, providing us with the kind of comfort Isaiah offers us this Shabbat.