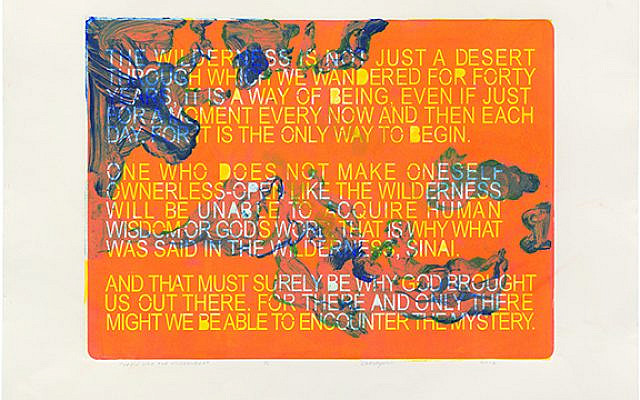 Artist Carol Neiger's "Wilderness" was inspired by a midrash that teaches, "a person does not attain the Torah until they have made themselves empty and ownerless like the wilderness." © Carol Neiger

If your image of what Passover may be like this year could use a lift, along with your spirits, a stunning new haggadah by a group of talented artists in Chicago could be just what you need. Out of the Narrows: The Artists’ Haggadah is a beautifully conceived adaptation of the traditional Passover seder text, accompanied by original contemporary artwork linking the extraordinary times in which we find ourselves to the timeless Passover narrative. 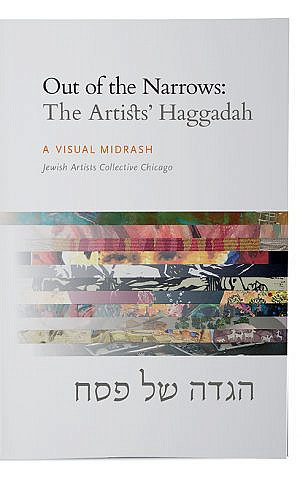 Members of the Jewish Artists Collective Chicago who are weavers, sculptors, painters and multi-media artists contributed to the Haggadah. The idea emerged a year ago when the COVID-19 shutdown suddenly made being in a narrow place — the meaning of the Hebrew word for Egypt — less of a metaphor and more of a current reality. “This Passover was unlike any other Passover we had experienced in our lifetimes,” recalls design and project coordinator Carol Neiger. “I thought, why not create a Haggadah that reframes our retelling with contemporary events and uses art as aggadah?”

The interpretative tradition known as aggadah reveals deeper meanings in Jewish texts. In that spirit, The Artists’ Haggadah is an inspired example of what is increasingly known as “visual midrash,” an inventive approach using art to engage imaginatively along with what appears in words, as well as what does not.

Haggadah means “telling” – visual midrash adds “showing.” Susan Dickman, who served as the project’s editor and writer, explains in a video that as an artist, she explores the “intersecting spaces that come up between images and text,” as well as the unspoken ideas. 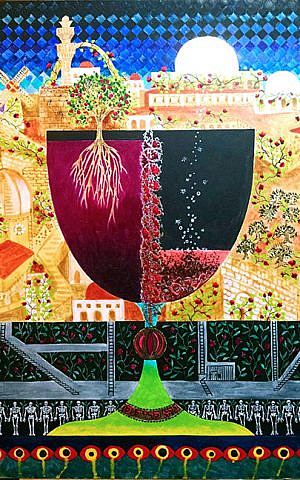 Judith Joseph’s “Glass Half Full” reminds us that even as we celebrate the redemption of our people, we remember the humanity of our adversaries. ©Judith Joseph

Content curator and editor Berit Engen notes that unlike other Jewish prayer books, which require rabbinic supervision, Haggadot have for centuries been remade and printed by individuals for use in their own homes. “What a welcome challenge for visual artists!” she added. A Norwegian immigrant who learned weaving techniques and traditions while growing up near Oslo, her work expresses “the singularity of the stranger.”

CREATING A COMMUNITY AMONG ARTISTS. Jewish Artists Collective Chicago began in 2016 when its founding participants met at the inaugural Spertus Institute’s Midwest Jewish Artists Lab. Amy Reichert, a member whose art has been featured in museums around the world, says the group creates an important community for her and others. “I find it a really unique opportunity to share work and resources for my Judaica. The rest of my practice is in an exhibition and architectural design, and there are ready-made communities for those disciplines,” she explains.

Neiger, Dickman and Engen collaborated on the Haggadah text, with the objective of translating traditional Hebrew in gender-sensitive, contemporary language. Artists who contributed their work to the Haggadah also provided brief and often poetic reflections on the relationship of symbols and inspiration for the art. 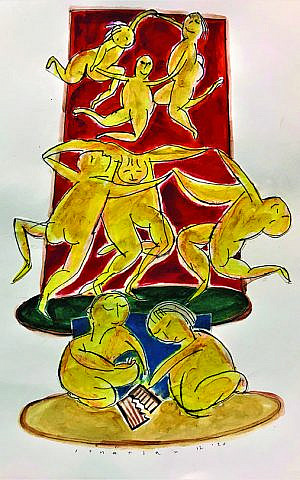 FOR COLLECTING AND AROUND THE SEDER TABLE. Two versions of Out of the Narrows: The Artists’ Haggadah are available. A fine art edition can be ordered from Blurb and a less expensive version that may appeal to those wanting multiple copies is available from Barnes and Noble.

You can also watch a video featuring the artists, their beautiful work and their thoughts on the Haggadah.