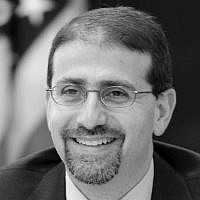 The Blogs
Daniel B. Shapiro
Apply for a Blog
Advertisement
Please note that the posts on The Blogs are contributed by third parties. The opinions, facts and any media content in them are presented solely by the authors, and neither The Times of Israel nor its partners assume any responsibility for them. Please contact us in case of abuse. In case of abuse,
Report this post.

Creativity is underrated in diplomacy. But when deployed effectively, it can turn a hopeless stalemate into an unexpected opportunity. The key is that all parties must embrace what it offers.

Through more than a decade of US-brokered attempts to resolve the Israel-Lebanon maritime boundary dispute, little had changed and nothing had moved. It was an essentially zero-sum negotiation over how much of a sliver of the Mediterranean Sea would be included in each country’s Exclusive Economic Zone. There were potential gas deposits in the area, which made each side press for the maximum share it could get. But no deal was ever reached, denying both sides certainty, and Lebanon any ability to develop its gas resources, even as its economy plummeted and all of its Eastern Mediterranean neighbors produced gas at will.

President Biden’s special envoy, Amos Hochstein, a veteran of some of the frustrating earlier rounds, came with a different approach. Armed with unique knowledge of energy production protocols in other regions, he suggested each side focus not on what they were giving up, but on what they most needed.

Lebanon needed a chance to drill for gas in its waters. Considering the economic, energy, and humanitarian crisis Lebanon is facing, failure was not an option. No international gas producers would drill in waters subject to dispute and potential conflict. So a deal was imperative, one in which Lebanese leaders could also claim to their public that they had not relinquished Lebanese territory and energy resources.

What Israeli leaders decided they needed was the certainty of quiet in the Mediterranean, and protection of its economic and security interests. Quiet comes from Lebanon’s own incentive to ensure there is no conflict, so its gas (assuming commercially viable deposits are found) in the Qana field that straddles the border can flow, while Israeli gas can flow unmolested in the adjacent Karish field, which is nearly ready for production. In addition to heading off a potential conflict in the north, the agreement ensures Israel will receive its proportionate share of royalties from the shared Qana field, protecting its economic interests.

In fact, there is a strong argument that not only did Israel protect its interests, but, by ensuring Lebanon has its own gas resources, it advances them in two key ways.

The best articulation I have heard of this idea came from Israel’s former National Security Adviser Yaakov Amidror. In an interview on Radio 103 FM in August, recounted by Ben Caspit in Maariv, he said that Israel has no interest in having a humanitarian crisis on its northern border. He might have gone further and reminded his listeners what happened the last time there was a total collapse of the Lebanese state: a 15-year civil war that killed tens of thousands, destroyed millions of lives, and, among other disasters, resulted in the rise of Hezbollah.

Second, he said Israel has a strong interest in Lebanon having its own gas rigs so that Lebanon will be motivated to maintain quiet at sea because it will have something to lose. If Hezbollah ever attacked Israel’s rigs, he said, it is perfectly clear what the response would be. That means enhanced Israeli deterrence.

Amidror found the mutual interests argument far more compelling than the question of the angle at which a line is drawn from the coast to determine Exclusive Economic Zones. (There is more than one legitimate way to draw the line.) He judged the government capable of balancing these questions, understood that in a negotiation no side gets everything, and rejected claims of a blow to Israeli sovereignty. The sliver of sea that Israel no longer claims, he pointed out, is not holy land. It is not even land. So the requirements for approval of territorial withdrawals do not apply.

In addition to its economic and security gains, under the agreement, Israel achieves something it never has before: effective Lebanese recognition of the security border Israel asserts in the first 5 kilometers from the shore with the buoy line in its territorial waters. Lebanon will deny this, but it is very clear that this line is now accepted as the status quo and will be treated as Israel’s legitimate maritime border by the international community.

Hezbollah leader Hassan Nasrallah was relatively restrained in his remarks on the deal. But in time, he will return to his blusterous claim that Hezbollah’s threats made Israel capitulate. That big talk will be a poor attempt to mask that Lebanon has, for the first time, entered a kind of de facto recognition of Israel and its borders. It also won’t acknowledge that Hezbollah’s own freedom of action will now be constrained.

The deal still must survive passage through both countries’ political systems, which will not be easy. For Israel, there are internal matters that the Attorney General, the courts, the Knesset, and ultimately, the voters, will have to address. But for US interests, a creative resolution that allows any gas to flow for Lebanon and more gas to flow for Israel without risk of conflict is a win.

About the Author
Daniel B. Shapiro is a distinguished fellow a the Atlantic Council. He previously served as US Ambassador to Israel.