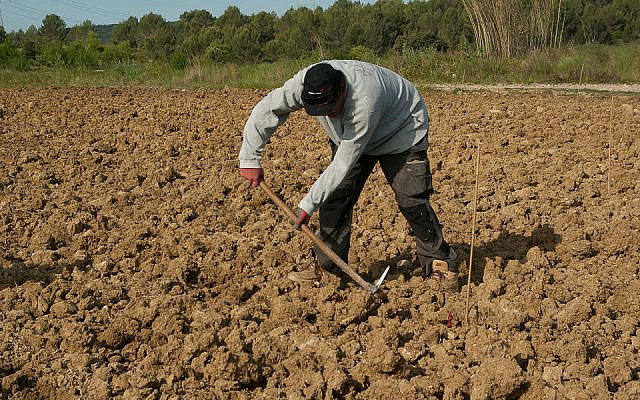 The Torah forbids a Jew from performing any melacha on Shabbat (Ex. 20:10; 32:14-15; 35:2; Lev. 23:3; Deut. 5:14). Similarly, the Torah reports that when G-d finished creating the world after six days, He rested on the seventh day from all forms of melacha (Gen. 2:2-3). The word melacha is typically translated as “work” or “labor,” but in the laws of Shabbat it takes on a more exact meaning that bans 39 specific categories of work, but does not forbid other laborious activities. In this essay we seek to clarify the exact meaning of the word melacha by comparing it to its apparent synonym avodah, and mapping the relationship between these two Hebrew words.

Accordingly, Nachmanides explains that there are two types of melacha: one is melechet hanaah, labors for human enjoyment, which means preparing food; while the other type of melacha is melechet avodah, which is all other “work” that does not provide for physical enjoyment. Based on this, Nachmanides understands that the above-mentioned phraseology serves to teach the halacha that on the holidays only forms of labor not required in preparing food (melechet avodah) are forbidden, but forms of labor necessary for preparing food (melechet hanaah) are not forbidden.

In fact, Nachmanides observes that the very first time the Torah mentions the prohibition of melechet avodah on a holiday, it follows up on that prohibition by explicitly noting that food preparation is permitted (Ex. 12:16), and then assumes that the reader can extrapolate from this that the same is true of all holidays. By contrast, on Shabbat and Yom Kippur all forms of melacha are forbidden.

In a nutshell, Nachmanides understands that avodah refers to any labor that does not directly lead to physical pleasure, while melacha even includes labors that lead directly to physical pleasure (specifically, food preparation). That said, Abarbanel (to Ex. 20:9) disagrees with Nachmanides, arguing that avodah and melacha are true synonyms and do not convey separate ideas.

Rabbi Yitzchak Shmuel Reggio (1784-1855) explains in his commentary to the Pentateuch (Ex. 12:16; 20:9) that the term melacha refers specifically to an act that brings about an improvement in a specific object, while avodah refers to any act of labor, whether or not it brings about any changes that affect a specific item.

Rabbi Aharon Leib Steinman (1914-2017) illustrates this difference between melacha and avodah by using the classical cheftza-gavra (object-person) construct found in Yeshivas. He explains that the term melacha focuses on the object of work, and denotes performing acts of labor intended to yield certain products or results. The term avodah, on the other hand, focuses on the worker himself and his efforts, denoting work or labor as actions performed by a specific person.

Rabbi Yaakov Tzvi Mecklenburg (1785-1865) quotes an elaborate discussion about these words from the writings of R. Naftali Hertz (Wessely) Weisel (1725-1805) — a figure often maligned as a maskil, but whose rabbinic bona fides are also attested to. He writes in Yayn Levanon that the word melacha primarily refers to any sort of creative or innovative activity — whether by thought, verbalization or action — and need not require any physical act. The term avodah, in contrast, refers specifically to tangible actions.

Rabbi Samson Raphael Hirsch (to Gen. 2:2, Ex. 12:16, 35:2) takes all the above-mentioned ideas and synthesizes them quite nicely. He argues that the term avodah focuses simply on the labor or toiling without consideration of the result, but that the word melacha focuses on the result of one’s work. As such, melacha refers to that which avodah can accomplish. Rabbi Hirsch writes that melacha is conceptually related to malach (“angel” or “messenger”). Just as the malach is the agent used to bring about the realization and execution of a certain idea, so does melacha take a thought or idea and carry through to turn it into a reality. In a nutshell, melacha denotes intelligent and creative labor, while avodah is brute work.

Rabbi Moshe Alshich (1508-1593) explains that avodah refers to labor that one performs on behalf of his master (it is related to the word eved — “slave” or “servant”), while melacha refers to any form of labor in which one might engage.

Along these lines, Rabbi Tzvi Yehuda Kook (1891-1982) explains that melacha denotes a more abstract form of work that allows one to realize the contents of his own free thoughts. Because it is closer to the realm of the sublime than forced labor is, melacha is connected to the word malach (“angel”), which dwells in the lofty Heavens. Melacha is performed under the influence of one’s own faculties and decisions. In melacha, it is man’s own thoughts that drive him to do what he does.

The term avodah oppositely denotes a more concrete and focused form of work. Instead of being the product of one’s freedom, it is the product of one’s constrictions. As such, avodah is limiting. Instead of a person controlling his work, his work controls him. This can be a positive thing when avodah as the service of G-d controls a person. But on the flip side, it can also have negative results. About this, King Solomon wrote that even a king can become a slave to his field (Ecc. 5:8). With this in mind, Rabbi Kook warns that sometimes a person can become so involved and devoted to his work that his job or his tools are really controlling him, instead of him controlling them.

Malbim (1809-1879) and Rabbi Shlomo Aharon Wertheimer (1866-1935) explain that the term avodah denotes a form of hard labor or work by which one must exert much effort (and to which one is subjugated/responsible — mishubad). Easier services that do not require so much effort or energy are branded as sheirut (“service”), and a related word misharet refers to a “domestic helper” who carries out light household duties. [Rabbi Shlomo Pappenheim (1740-1814) writes that since avodah refers to work that one is obligated to perform, it can include even lowly, disgraceful, or dishonorable forms of work that he would not otherwise do, even if they technically do not require much effort.]

Nonetheless, Malbim notes, when it comes to the service of G-d, even the easiest forms of ritual worship (like singing, which requires barely any physical exertion) are called avodah, because the importance of the service makes it as intense as harder forms of labor.

Following this basic approach, Rabbi Yoel Teitelbaum of Satmar (1887-1979) notes that the word melacha is related to the word malach (“angel”) because just as an angel exerts no physical effort in performing his duties, so does melacha refer to a labor that is not as physically straining as avodah.

When the Torah refers to the Levitical duties of the family of Kehat, it refers to those duties as melacha (Num. 4:3). Yet, when referring to the duties of the families of Gershon (Num. 4:23) and Merari (Num. 4:30), the Torah switches to the word avodah. The Tosafists and Peirush HaRokeach account for this word-switch by explaining that Kehat’s responsibilities were less difficult and required less effort than the other families’ responsibilities, since they only had to carrythe components of the Mishkan and did not need to do anything else. Because of this, the Torah uses the word melacha, which implies a lighter form of labor, when speaking about Kehat. Rabbi Shmuel David Ungar of Nitra (1885-1945) notes that this is especially true in light of the fact that the Holy Ark actually carried those who seemed to carry it (Sotah 35a).

On the other hand, the other families of Levites were expected to assemble and disassemble the Mishkan, which is a more difficult task. Therefore, the Torah uses the term avodah, which implies a more difficult form of labor, when speaking about their duties.

To access more of Rabbi Klein’s writings and audio lectures, visit him on Amazon.com.