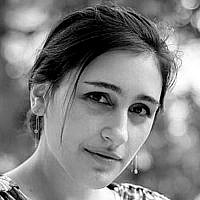 The Blogs
Giulia Ora Paris
Apply for a Blog
Please note that the posts on The Blogs are contributed by third parties. The opinions, facts and any media content in them are presented solely by the authors, and neither The Times of Israel nor its partners assume any responsibility for them. Please contact us in case of abuse. In case of abuse,
Report this post. 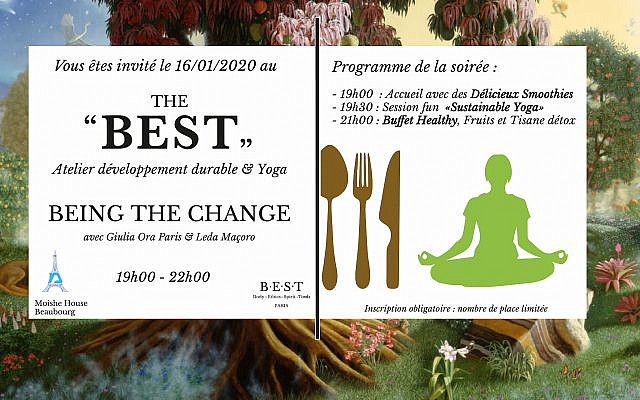 היה היה פעם (Once upon a time)…

Before this workshop idea was conceived, I was inspired to do something with Jewish texts on sustainability from an experience that you would not expect. A little over a year ago, I had the very unusual privilege of going to a rabbinical conference in the US. I was invited as part of my research on Jewish pluralism. The conference was overall interesting, but the more memorable part was the second day evening activity. They told us we would have a very interactive activity and to wear sporty clothes. When we arrived to the class, an instructor told us to split into groups, and minutes later we were learning to hold each other up on our shoulders and other similar things! Each position was to remind us of a Torah portion. There was something very meaningful to combining something physical and daring with Torah. It would have been difficult to do that again because it was part of aerial arts training. Nevertheless, I thought that the overall idea could still work in the right circumstances. I have a personal interest in the topic of sustainability, and it is an interest of mine to combine Jewish study on the topic with something meaningful like this.

Almost exactly a year later, in Paris,  this woman appears out of nowhere doing yoga classes with different Jewish groups, Leda. Leda with Mira founded BEST. BEST stands for Body, Ethics, Spirit and Torah. I attend her workshop and love how she meditates and reflects on all of the poses and food she offers us to eat. Her class is very spiritual and with woven in connections to health. I think, “Yoga is also daring and physical.”  After class, we talk a bit, including about how I have a passion for the topic of sustainability. Shortly after, she invited me to her home, and we discuss an event. In a room full of plants, over homemade banana bread and tea, I pitch the adapted, slightly more complex version of what I learned in the US, and she loves it.

Two seconds later, we are thinking about the design of the flyer, what to say, and logistics. It is really easy working with her, and she is so positive the entire time.

I love creating recipes and food combinations, so I offer to take care of the food portion of the event, and I am so glad I did. It is so rewarding when people come up to say what I made was good and that they would like the recipe, and so, here it is below!

It is very important to me that things look nice and so different from the previous yoga event. I make sure the drink is nice. Also, we use glasses instead of colored cups which can make the color of the liquid inside look less appetizing, looking at the side.

I invented a name below. I am not good with names, so I welcome other suggestions.

Blend the above all together 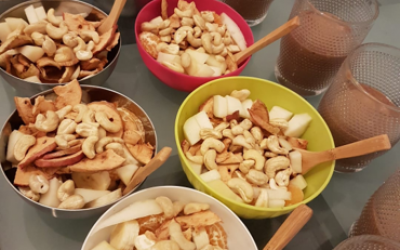 Bowl of Snowy( because of the color) Fruit:

Chop all the above in a bowl

I only received one compliment for this, and it was from my partner Leda who said the cashews were a great idea. I personally found the bowl of fruit satisfying.

After everyone took a smoothie, they lay down on their mats, and I turned on the projector on the wall. Below are the different quotes, and some questions I asked.

I only spoke in French during the actual text study part, and having notes helped me a lot.

It is difficult to show all the yoga poses we did because they were many and very dynamic. Right after each yoga pose, we got into pairs and invented a pose. It was really nice to see how people were very creative. They also helped other pairs come up with poses and seemed happy as if playing.

The important thing is that people seemed to be happiest when doing yoga in pairs than alone.

There were a total of 6 Postures.

The LORD God took the man and placed him in the Garden of Eden, to cultivate / serve and care for him / keep.

God blessed them and God said to them, “Be fertile and increase, work the land and master it; and reign over the fish of the sea, the birds of the air and all living things that crawl on the earth. ”

I therefore consider the following opinion to be the most correct according to the teaching of the Bible, and the best in accordance with the results of philosophy;

namely, that the Universe does not exist for man, but that each being exists for its own good, and not because of something else.

So we believe in Creation, and yet we don’t need to look for what each species is for, because we assume that God created all parts of the Universe by His will; some for their own good and others for the good of other beings, who include their own purpose in themselves …

P3 Why does everything exist for itself?

Is the above text contradictory?

(in bold are the actual talmud words)

P4     Do you think it should apply only to food or what else?

Look at the work of God – for who can right what He twisted? (Ecclesiastes 7:13). When Hashem created the first human, He took him and led him around all the trees in the Garden of Eden and said to him: “Look at My works, how beautiful and praiseworthy! And all that I created, it is for you that I created it. Be careful not to corrupt and destroy my world: if you corrupt it, there is no one to fix it after you…

P5    Why the example of the trees of all things in the garden, no earth or water? 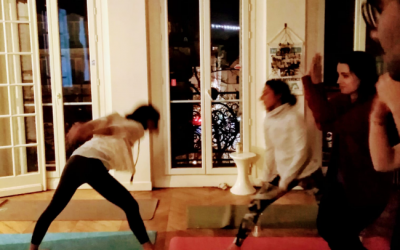 Six days you will do your work, but on the seventh day you will stop working, so that your ox and your donkey rest, and that your slave and the stranger are refreshed.

P6    how can you inspire us to find balance? 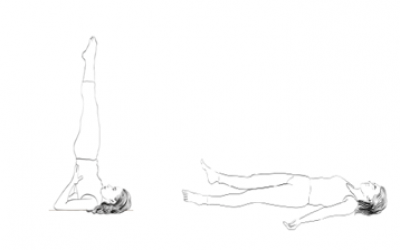 We were not sure at which pose we would stop; you need to feel how the group is doing. I was very tired from doing yoga, paying attention to how people were doing, thinking about the design of the event, and thinking about the study material.

Leda, the yoga instructor transitioned us in a very organic way to a state of rest, and we lay on the floor. I was lying on the floor in the dark,  street lights reflected on the wall as cars went by. I was thinking it would be better if we had something visual reflected above our vision to guide us. Maybe in the future, we could be in a park and project lighting on the bushes or trees.  I was also thinking that it would be nice if we shared different relaxing images, but people were too tired to do so. Maybe anything more would be too much unless it fit meaningfully.

To finish, we sat on our mats, and I asked if anyone wanted to do the blessing before eating the fruit. In the previous session, someone had volunteered but I think people were too tired by this time, and so I did it first in English and then in Hebrew.

We then ate from our bowl and had chocolate and tisane. While we ate, I tried to ask for feedback in an organic way, and I only heard “It was very interesting”, “It was fun”, and “The smoothie was really good.” but maybe people were also too tired to talk about it too much ? It is important to get feedback while it is still fresh in their mind. The best feedback is  that I saw everyone engaged with the workshop, the entire time.

I prefer working with less than 20 people at a time, I think 10 would be the maximum because with any more, it is difficult to connect with everyone at one event. The number also depends on the time I have to meet and talk with people. I had 6 people to interact with in two hours, and that was good.

I need to determine how to measure the success of the event, and I think it is the quality of what is offered, the dimensionality of the event, combining Torah ,Yoga, sustainability etc in an elegant/harmonious way that gives it depth a feeling of connection with one’s past, other people, a sense of peace in the presence and future and its impact in inspiring people to live a personally meaningful Judaism.

We live in a society with so much potential and the important question and also one of my most sacred and deepest values is “How do we structure creativity?” I think we structure creativity by connecting what we are doing to collective history or values such as sustainability and health as we did. How to structure creativity in a world that might just be too taken by consumerism and not exactly meaningfully creative is something I have been reflecting on for a while, and I will expand on with time.

I am satisfied with the event, and it was a dream come true! Everything about it embodied Jewish values. It embodied fully creative potential because it opened discussions about practical ways to heal the Earth, heal the body, connected us to our most sacred historical artifacts that are Jewish texts, expressed working together creatively which is what we need to do to solve any problems, nurturing our bodies, nurturing our soul, socializing, and did all this in a harmonious/elegant way. There is no greater way to create meaning than by writing and reading, so thank you for reading!

About the Author
She has over 10 years organizing a variety of Jewish workshops, has been president of a Jewish Scout Unit and Synagogue Counsel. With an eclectic background and international Jewish experience, her goal is to find and create meaningful structures for the creativity of these ever-evolving new Jewish experiences in our modern society. She creates learning experiences that are personally meaningful for people, individually creative and that can create rapport between Jews with different opinions and backgrounds. She does this by harmoniously connecting people to our sacred Jewish text and to basic elements of life, such as science, health, food, and heritage. In Paris, she promoted the first community-wide event on sustainability, in Jewish Paris.
Related Topics
Related Posts
Comments