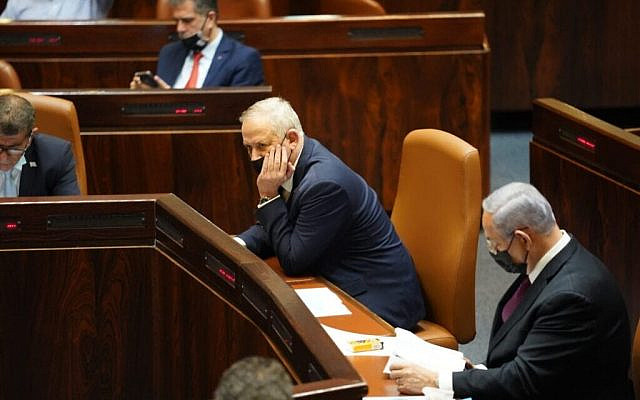 Benny Gantz, left, and Benjamin Netanyahu in the Knesset during a vote for the parliament to dissolve itself, on December 2, 2020. (Danny Shem Tov/ Knesset Spokesperson)

Do we inherently seek justice, or prefer culprits to escape unscathed? In popular culture it is not entirely clear: we’re often made to root for the villain. In politics, the same applies: the nastier the operator the stronger the teflon can be. And then there’s Benny Gantz.

Gantz went in record time from knight in shining armor to something of a national joke (or a latter-day Job). He committed a long series of terrible mistakes, but this is the land of second chances. Yet in his case not a bumble is forgiven, nor a stumble left unmocked.

It’s a twist because popular lore sees Gantz as born under a lucky star, a decent fellow who bumbled and stumbled into top positions (he was the second or third choice for military chief). This continued when he slid into the savior role for non-right Israel in 2019: he was a general, he was tall, he meant well and was not yet discredited by action, inaction or scandal.

So Gantz became the head of the “Blue and White” multi-party party and was sent into battle with Benjamin Netanyahu – a man of great political talents and some notable achievements, but one possessed of a personality so twisted that half the country hates him with an intensity that makes Trump Derangement Syndrome seem mild by comparison.

Three inconclusive elections later, Israel is headed to the polls yet again, for the fourth time in two years. That type of thing was once reserved for Italy, which is apt: the corruption at the top is of a cartoonish level befitting a Berlusconi.

Netanyahu is on trial for bribery, fraud and breach of trust, with other investigations overdue or underway; he made millions in shady stock deals involving a cousin; his closest former aides are state’s witnesses and his Likud ship is finally leaking ex-cronies who have discovered a conscience late in life. Still, he cannot be ruled out; Netanyahu can never be ruled out.

And what of Gantz? If he even decides to run again, this man who in 2019 led Blue and White as the largest party in the Knesset might not even make it in. The prime ministership is no longer even a distant dream. The left wouldn’t have him.

To those who wonder what crime deserves such punishment, here is my best effort to explain.

First, Gantz ran away from ideology like it was the coronavirus. Despite being the standard bearer of Israel’s liberal flank, no one could get him to say a bad word about the half century of occupation over millions of Palestinians. And except for a brief moment in the second campaign, he also refused to address the creeping clericalism that terrifies secular Israelis. Gantz genuinely believed he could win on personality alone. This is the crime of hubris. In politics, it only works for the other side; leftists are more persnickety.

Relatedly, he refused to embrace the Israeli Arabs who are 15% of the electorate, 21% of the country, and almost 30% of the center-left that is Gantz’s side in this fight. He didn’t seem to know these facts. This is akin to Netanyahu rejecting the Haredim, without whom he cannot govern – which does not happen. Ahead of the third election, Gantz finally reached out to select Arab sector leaders. But in public he insisted he would not join forces with the Joint Arab List, without which he could not possibly form a government. This is the crime of cluelessness.

Throughout, Gantz brought a slingshot to a gunfight. He never convincingly voiced the outrage his supporters felt over the chutzpah of a criminal defendant clinging to office. Nor did he reflect the revulsion of half the country toward Netanyahu’s authoritarian, divisive and even seditious behavior as he agitated against the police, prosecution, court system, media, the left, and the imaginary “dictatorship of leftist bureaucrats.“ Instead, he insisted on politely thanking Netanyahu for his service, mumbling something about Bibi being not quite what he once was, and protesting that it was his turn now. While Gantz practiced such gallantry, Likud was flooding the media with salacious dirt on him – from claims and reports of security breaches and sexual misbehavior and steamy affairs to entrapment of an aide saying damaging things while being secretly recorded (see story on the smear campaign). This is the crime of weakness.

Why pull punches this way? Because Gantz hoped to persuade right-wingers to switch sides, and some internal polls showed they disliked attacks on Netanyahu. He forgot that we’re living in a social-media-driven age of mulishness in which few can be persuaded of anything once they’ve made up their mind. In such a landscape turnout is key. One must fire up one’s own side with infectious passion and the right policies. But clearer voices like that of Yair Lapid (who reluctantly agreed to run under Gantz) were suppressed in the name of this misguided strategy, which in turn depressed the turnout in places Gantz needed like Tel Aviv. This is the crime of misreading the map.

Despite this overcautious and half-baked campaign, Gantz still managed to eke out a tie or a victory in all three elections – in each case the loss being averted by the surprise conversion of Avigdor Liberman. Liberman is a strange case of an illiberal ultranationalist who somehow still understands the demographic inconvenience of the occupation, and his secular Russian-speaking base cannot stand the religion policies set in stone to appease the Haredim. In the last election, together with Liberman’s Israel Beitenu party and the Joint Arab List, Gantz controlled a Knesset majority that appeared ready to work together at last. President Reuven Rivlin received 62 formal endorsements for Gantz and gave him the coveted “mandate” to form a government. To drop this ball would be the crime of squandered golden opportunity.

But there was a grenade inside his house, waiting to explode. As part of the doomed effort to appeal to the right, Blue and White put two genuine right-wingers, Zvi Hauser and Yoaz Hendel, in parliament. These political pickpockets did not deliver much electorally but they did refuse to support a Gantz government because it would depend on the Arabs. It is inconceivable that Netanyahu in a similar position would not have taken this duplicitous duo into a very darkened room with a large baseball bat. But Gantz complied, and it was a short path from there to joining a government under Netanyahu in exchange for a promise to be handed the reins at a future juncture no one else believed would come. Gantz became the first person in history to be awarded the mandate and end up using it to set up a government for someone else (based on the word of a modern-day Caligula). This is the crime of collusion (compounded by credulousness).

In joining Netanyahu when his only role was not to, Gantz did the one thing that simply must not be done, without discussion. Blue and White swiftly fell apart, dealing grave damage to the idea of a counterbalance to Likud. Netanyahu immediately went to work on humiliating Gantz at every turn. From his stunned former allies on the left, a tarring and feathering began.

It is true that being in the government Blue and White was able to block some terrible things. But polls show Gantz vaporized his political stock in recent days, as he tried in vain to prolong the government’s life and ensure a desperately needed state budget is passed. In the end, rebels from his own faction dealt the coalition the coup de grace.

Israelis are willing to overlook great disasters and follow the occasional crook off a cliff. Why is this decent man paying so fully for his sins?

The reason should be clear: unlikely though it seems for a former chief of staff, Gantz comes out of this sordid business looking like a sap. Land of second chances Israel may be, but a freier is the one thing it will not abide.