A couple of weeks ago during our Emunah Israel trip a group of us had a unique experience.  Two generals – one from Jordan and one from Israel who had worked on the peace treaty between Israel and Jordan 25 years ago –  came to speak with us. 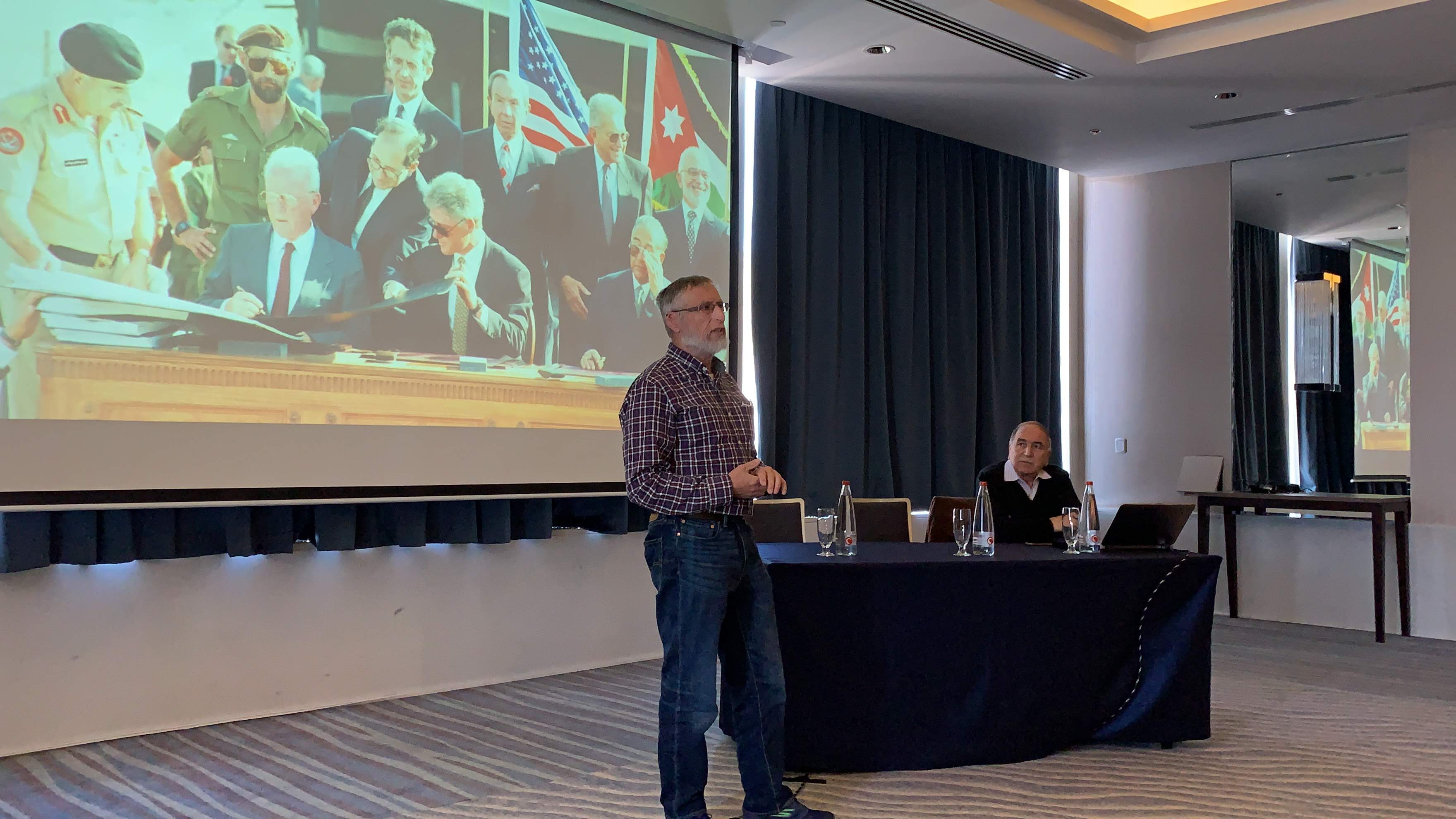 Israeli General Baruch Spiegel and Jordanian General Monsour Abu Iyad, who were respectively the military advisors to Prime Minister Yitzhak Rabin and King Hussein of Jordan explained their work as they negotiated the exact borders between the two countries, sharing water, security cooperation and working together on the environment.

And then, they got on our bus and we drove right to the border.

Without any passports or any border checks (which as I explained last week is not my favorite experience any more!), the gates lifted for us and we simply drove across the border into the territory between the two countries where the peace treaty was signed. 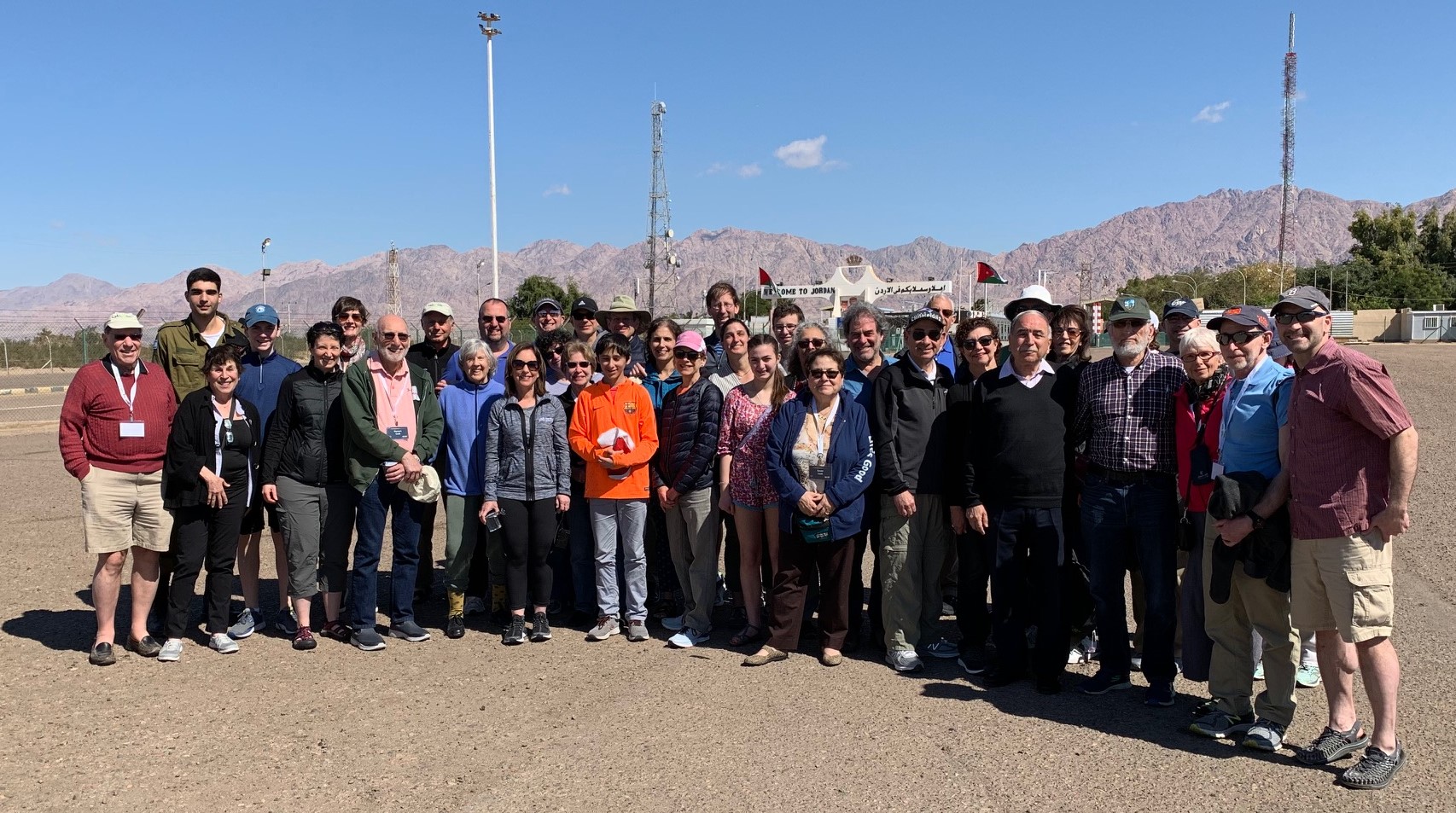 We learned from them not only the complexities of two countries that had been at war making peace, but also of the qualities of these two leaders.  They had fought against each other – in General Abu Iyad’s case, he was wounded in the 1967 war by Israeli forces, but they put all that aside, building a trusting and lasting relationship.

It did not start so easily.

They described their first encounter on a small walkway that was placed over a part of the Jordan River.  Each one stood on his side of the bridge and took exactly the same number of steps to meet in the exact center and shake hands.  Neither one wanted to take an extra step!

While this might sound a bit silly, if one person took an extra step, it might appear that the other person or the other side was being given some kind of advantage.

Imagining that handshake on that narrow bridge made us all laugh, although back then, the level of anxiety must have been quite high.

Their model was a case study in leadership.  They were people who learned about each other, their families and their societies and moved themselves and their countries toward peace.

They took the time to build the trust which created the safe space to negotiate complicated issues including adjusting international borders!

I have to say I was quite inspired by their leadership.

I have been thinking about leadership in our world as we watch leader after leader falter in our country, in Israel and throughout the world.

Leadership has never been easy and these days, it may in fact be more challenging as information and news move at ever faster rates.  Leaders have less time to reflect and think, reacting too quickly to our hyperactive news cycles.

Our tradition has been somewhat unique in that it portrays flawed leaders – the Torah does not sugarcoat its leaders, nor is it afraid to be honest – brutally honest.

It does not eliminate the negative aspects of our leaders.  Abraham does not protect his wife Sarah when they are in danger in Egypt, Jacob plays favorites with his children and Moses kills a man in anger.  The Torah could have easily left those vignettes on the cutting room floor, but it chose not to.

Why leave these narratives in the text?  What do we learn from this?

Our tradition presents us with flawed leaders – not because it is the ideal, but because it is real.  And we can learn something helpful from them.  People are not perfect. Even the greatest leaders make mistakes – often regularly.

Our tradition teaches that the perfect can be the enemy of the good.  None of us is perfect, but we are taught to reflect on our actions, allowing us to grow and do better.  A whitewashed leader can feel so removed that we are not moved by them to bring their example into our lives.

That is not to say that we cannot be inspired by the more perfect leaders we find recorded in other civilizations, but they are missing a more human quality.  Their perfection removes them from our world and our lives.  They are, if you will, too perfect to teach us something to which we can truly aspire.

The Torah emerges from an ancient world with its own conception of leadership.  In ancient Mesopotamia, only the king was created in the image of God – B’tzelem Elohim.  That is why the leaders of that world, like Pharaoh were considered just like God, or in fact, God.  Only the kings or elites could aspire to such divine perfection.  All the rest of the people worshipped the king.

But the monotheism of our Torah shatters that structure.

The Torah opens with the idea that ALL humans are created B’tzelem Elohim – in the image of God.  And therefore, we can all have a direct path to the divine.

Parashat Pekudei deals extensively with the the Mishkan, the Israelites’ portable sanctuary, as well as the clothing worn by the Kohanim, there is also parts that touches on leadership.

Our parashah opens with “And Bezalel, the son of Uri, the son of Hur, of the tribe of Judah made all that the Eternal commanded of Moses.”

Now to our tradition, this is an unusual verse.

What is the normal manner of command in the Torah?

God speaks to Moshe who passes the instruction along.

Noting this difference, Rashi comments that Betzalel, the great artisan of the Israelites’ wilderness sanctuary, did not receive all the directions from Moses or God, but that he intuited what he did not receive directly at Sinai.

Rashi explains: “For Moses told Bezalel to make the vessels first followed by the Mishkan, but Bezalel responded, ‘Don’t we usually build the building first and then place the utensils inside?’ Moses replied, ‘What you have said is indeed the way I heard it. You are just like your name Be-tzal El (In the shadow of God) for it is as if you were there when we had the conversation.’ And this is the way Bezalel made it, the Mishkan, the dwelling place first and the vessels later.”

I have endowed him with a divine spirit of skill, ability, and knowledge in every kind of craft;” (Ex 31:3) but he also has an additional quality: he can intuit something deeper, something that Moses did not teach him.

In addition, Betzalel does not make Moses feel insulted that he is going to build things in a different way.  He brings Moses into his decision-making process, helping him see the value in his approach, while never diminishing Moses; Moses is not threatened by Betzalel, but appreciative of his gifts.

That brings me back to General Abu Iyad.

Not only was he a thoughtful leader during the years he was literally creating peace and then maintaining it, but even now he is thinking about the challenges.  When he was asked about what worries him today, he was not afraid to speak about the challenges in Jordan where, he remorsefully explained, the next generation is not feeling as excited about peace.

They are being pushed to stay away from Israel and these anti-normalization forces, those who feel that Jordan should pull away from Israel, are gaining strength.  Due to the internet which exacerbates extremist voices, General Abu Iyad sees a louder and louder minority of people who do not want to build bridges with Israelis.

That is most haval – most disappointing. It serves to remind us all not to give up; we must keep walking across those narrow bridges, reaching out to those on the other side.

Positive thoughtful leadership can bring about peace as we see in examples from Betzalel to Prime Minister Rabin and King Hussein.

What we really need are real leaders. 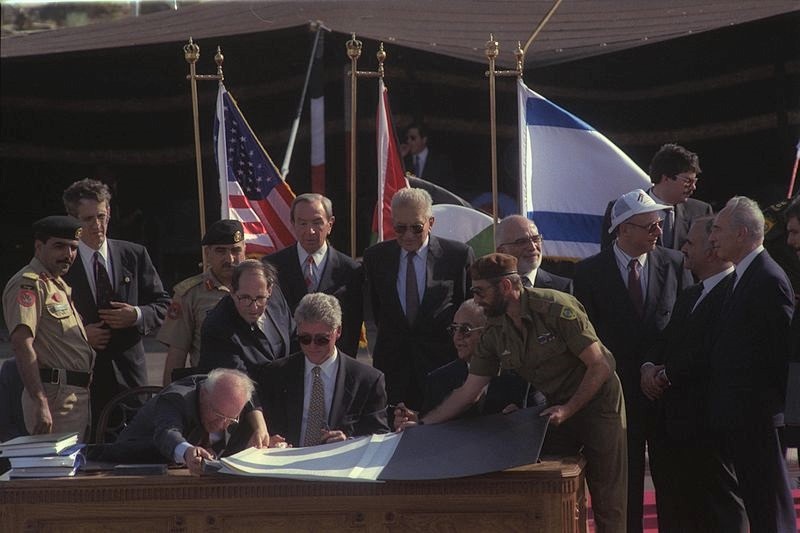 The Israeli-Jordanian Peace Treaty Signing Ceremony at the Arava Terminal from National Photo Collection of Israel, Photography dept. Goverment Press Office, under the digital ID D554-004 by Yaakov Saar (via Wikimedia)
About the Author
For the past seventeen years, David Lerner has served as the spiritual leader of Temple Emunah in historic Lexington, MA, where he is now the senior rabbi. He has served as the president of the Massachusetts Board of Rabbis and the Lexington Interfaith Clergy Association. He is one of the founders of Community Hevra Kadisha of Greater Boston, ClergyAgainstBullets.org and Emunat HaLev: The Meditation and Mindfulness Institute of Temple Emunah. A graduate of Columbia College and ordained by the Jewish Theological Seminary where he was a Wexner Graduate Fellow, Rabbi Lerner brings to his community a unique blend of warmth, outreach, energetic teaching, intellectual rigor and caring for all ages.
Related Topics
Related Posts
Comments