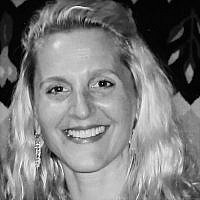 The Blogs
Tova Goldberg
Apply for a Blog
Please note that the posts on The Blogs are contributed by third parties. The opinions, facts and any media content in them are presented solely by the authors, and neither The Times of Israel nor its partners assume any responsibility for them. Please contact us in case of abuse. In case of abuse,
Report this post.

At graduation ceremonies across the country in upcoming weeks, students will be hearing from invited speakers.  One would expect an academic institution to select an inspiring speaker who reflects the values of the university and represents the hopes of the graduates.  For its June 1st commencement, The CUNY School of Public Health and Health Policy has invited Linda Sarsour.  Sarsour’s record is replete with anti-American values, degradation of feminists and others who disagree with her, unbridled hatred of the State of Israel and those who support it, and the promotion of violence.  This shocking choice of speaker, by a City University, should be changed.

In the United States, violence and terror are not recognized as legitimate means to accomplish goals.  Sarsour’s support of violence and terror include:  praise of the intifada- the Palestinian terror war against Jews in Israel, through suicide bombings, car rammings, stabbings, bus bombs and other attacks,  – as “invaluable on many fronts;” warm words of endorsement for convicted murderer  Rasmea Odeh, who murdered two college students in a supermarket bombing in Israel (Odeh will be deported for concealing her terrorist crimes on her U.S. immigration forms); and admiration of Palestinian youths throwing rocks at Israeli soldiers as “the definition of courage.”  In any civilized society, these are the definitions of crimes.  Sarsour supports barbaric methods that are incompatible with American law.  With many recent terrorist attacks taking place  around the world, including the horrific bombing in Manchester on May 22, 2017, Sarsour’s praise of the terror war against Jews in Israel is outrageous.

Regarding feminism, a woman’s right to bodily integrity is a fundamental right.  Yet Sarsour denigrates feminists who speak out against the role Islam plays in tolerating the abuse of women, such as genital mutilation and honor killings.  She urges, in a tweet, a “whippin” of Somali human rights activist Aydan Hirsi Ali, a victim of female genital mutilation, who speaks out against Islam’s acceptance of abuse of women.  Sarsour tweets she wishes she could “take her vagina away” and Ali doesn’t “deserve to be a woman.”  Sarsour’s attempted delegitimization of women who speak out against abuse is incompatible with feminism.

Additionally, Sarsour defends Saudi Arabia’s oppressive treatment of women. In Saudi Aarbia, women cannot vote, study, work, marry, or open bank accounts without permission from male guardians.  Women’s clothing is strictly regulated (they must be covered from head to toe, and only eyes and hands may show).  Yet Sarsour tweets Saudi Arabia “puts us to shame” by providing “10 weeks of PAID maternity leave … and ur worried about women driving.”  Sarsour’s defense of subjugation of Saudi women disqualifies her as a feminist.

Sarsour claims to be a proponent of gay rights.  At the same time, she is a supporter of Shariah law. This is contradictory. Sarsour tweets “Shariah law is reasonable and once u read into the details it makes a lot of sense” and “Shariah law is misunderstood.”  There is no misunderstanding that in Muslim countries ruled under Shariah law, homosexuality is a crime.  (Consider the recent flogging of two homosexual men, under Shariah law in Ache, Indonesia.)  Further, influential Muslim sheikhs, clerics, and Shariah law authorities have proclaimed that the punishment for homosexuality is death, as detailed in the article in The Washington Times, “The Ugly Truth About Sharia Law,” June 13, 2016.  Sarsour’s endorsement of Shariah law precludes her from being a legitimate advocate for gay rights.

Ironically, Sarsour excludes Jews and other Israel supporters from the feminist movement.  This is anti-Semitic and spreads a lie about Israel’s treatment of women.  There is absolutely no conflict between Zionism and feminism.  In Israel, the only democracy in the Middle East, all citizens have equal social and political rights, regardless of gender, religion or race.  All citizens of Israel, be it Arab, Christian, or Jew, no matter what gender, have equal access to voting, transportation, hospitals, universities, swimming pools, public restrooms, etc.  Israeli Arabs are Supreme Court Justices and have seats in the Knesset, and these positions can be held by men or women.  Israeli Arab women have won or been runner-ups in The Voice (Israel), Master Chef, and Miss Israel.  Moreover, sexism and discrimination perpetrated by Palestinian men against Palestinian women is pervasive, as described in a recent New York Times article,  “In Gaza, Bicycles Are a Battleground for Women Who Dare to Ride,” February 22, 2016.

Sarsour’s unbridled hatred of Israel is prevalent.  She advocates for the Boycott, Divestment and Sanctions (“BDS”) movement against Israel, which seeks to cripple and delegitimize the State of Israel, while she ignores the world’s many countries with egregious human rights violations.  Further, Sarsour tweets:  “Nothing is creepier than Zionism;” and “[Israeli Prime Minister Benjamin] Netanyahu is a waste of a human being.”

CUNY in particular should be sensitive to anti-Semitism.  Last year, Jewish students at CUNY suffered many anti-Semitic incidents. At a CUNY rally sponsored by Students for Justice for Palestine, protestors screamed at Jews to “go back home and get the [expletive] out of my country” and chanted “Jews out of CUNY” and “death to Jews.”  Given these recent events, it is all the more appalling that a CUNY school would invite a divisive person with Sarsour’s record to deliver the commencement address.

Knowing all this, CUNY’s refuses to rescind Sarsour’s invitation.  It would be atrocious for CUNY to host a commencement speaker with a history of bigotry towards the LGBTQIA community, African Americans, women, or Hispanics.  CUNY should treat Sarsour’s hate-mongering towards Jews and Israel in the same manner.

Given the current climate of division in the United States, CUNY, and every university nationwide, should feel compelled to promote tolerance and civility.   Sarsour’s platform, rife with bigotry, denigration, and endorsement of violence, must be rejected.  CUNY must rescind her invitation.   This is a teachable moment for today’s youth and tomorrow’s leaders.  Don’t waste it.

About the Author
Tova Goldberg is a Zionist and feminist.
Comments