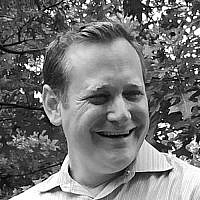 The Blogs
Howard Goldsmith
Dad, Husband, Rabbi, Outdoorsman, Skier, Cook, Dreamer
Apply for a Blog
Please note that the posts on The Blogs are contributed by third parties. The opinions, facts and any media content in them are presented solely by the authors, and neither The Times of Israel nor its partners assume any responsibility for them. Please contact us in case of abuse. In case of abuse,
Report this post.

I live in New Rochelle, NY and I’m fine.

This morning my son popped his head into the kitchen as I was making breakfast. “Is school canceled?!” he asked hopefully.

Yesterday, Governor Cuomo announced a containment zone in New Rochelle. It stretches one mile in every direction from Young Israel of New Rochelle, a Modern Orthodox synagogue in the north end of town. Many congregants at that synagogue came into contact with coronavirus over the weekend of February 22-23. A week or so later the synagogue was closed down and the people who had been exposed were put under self-quarantine. The private, Jewish parochial schools attended by most of the children of the synagogue also shut down. The community has followed the advice of health officials regarding self-quarantine and social distancing.

It is important to understand that the vast majority of the children whose families attend Young Israel of New Rochelle do not attend the New Rochelle Public Schools. The adults primarily shop in kosher markets. They do not typically enter churches and other public spaces closed by the containment zone. Their community boundaries are not defined by geography, but by schools, non-profits, and shops that cater specifically to the Modern Orthodox community. And, that ecosystem of establishments deserves a lot of credit for implementing quarantine and social distancing.

The one-mile containment zone declared by Governor Cuomo does not seem to take into account the social reality of this religious community. Instead, it places an arbitrary geographical boundary around a synagogue. This boundary has little relationship to the network of social interaction that scientists say we ought to limit. Therefore, rather than effectively focusing on real social contacts, the one-mile containment zone seems merely like an attempt to show action in face of uncertainty. Indeed, the map with the bright red circle around the synagogue made for some very dramatic images on the nightly news.

I normally would not fault a politician for trying to do something, to show some action, in the face of a crisis. And, normally, I would be glad that regulations were applied to all people and not just to one religious group. But, in this case, the one-mile containment policy is putting the children of New Rochelle at risk while disregarding the social realities of those New Rochelle residents exposed to the virus.

There are 11,000 children in the New Rochelle School District. Some of them are homeless. Many of them have no adult who can stay with them during the day. Even more of them rely on free breakfast and lunch programs for their daily nutrition. There have been no cases of coronavirus in the public schools. And still, the governor has shut down an elementary school, a middle school, and the high school. That means thousands of children with nowhere to go. That means a real potential to cause harm to countless public school children who rely on school for their social-emotional and physical well-being. This public school closure seems to reflect a shocking ignorance of the nature of the modern Orthodox community and a seemingly willful disregard for the children of the school district.

If my children needed to stay home from school, it would not be a problem. My wife and I could take turns working from home. Or, if need be, we could take time off. Our house is fully stocked with food and kid-friendly activities. We live in a safe neighborhood with a backyard. Time off of school for my children would feel, in many ways, like a vacation – with lots of chocolate chip pancakes. That is simply not the case for too many children in the New Rochelle School District who will be endangered by this geographic containment zone, a containment zone that ignores the social realities of those exposed to the virus. We do not know all the dangers of the coronavirus. We do know the dangers of closing the schools.

In the end, we all may be put under lockdown. A statewide or nationwide quarantine, as we’ve seen in China and Italy, would probably stop the virus or slow its spread to a crawl so that our healthcare system can operate effectively. But, until we do that, I urge Governor Cuomo to re-open the New Rochelle schools and to craft public health policies that align with the reality of the situation here in New Rochelle.

About the Author
Rabbi Howard Goldsmith is the spiritual leader of Congregation Emanu-El of Westchester, a Reform synagogue in Rye, New York. He is an executive member of the Westchester Board of Rabbis and a chaplain for the Westchester County Police Department.
Related Topics
Related Posts
Comments