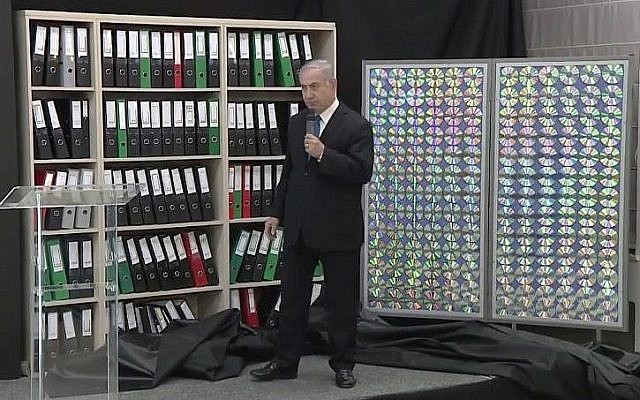 Lately, screens and curtains have been cropping up in the Israeli media, starting with a photo of the former President of the Supreme Court of Israel, Professor Aharon Barak, addressing a packed audience of male and female students separated by a divider at the Academic College of Kiryat Ono. Another report on covering came from the Museum of Natural History in Jerusalem, where a display on evolution was hidden under a sheet. And, most dramatic of all, live on prime time television, were the curtains that Prime Minister Netanyahu pulled away to expose shelves packed with secret Iranian files and disks.

Where does this fetish with screens and barriers come from? How is it used and to what end? And what does it mean? Beneath the surface, these veils are symptomatic of major shifts in the norms and founding principles that guide public life in Israel today. We ignore their significance at our peril.

The incident with Professor Barak speaks to the heart of social divisions in the country. On the surface, it deals with both the ongoing importance attributed to incorporating the ultra-Orthodox into the labor market and with the precarious nature of gender equality in the country. This is the last in a sequence of moves that promote haredi integration into public spaces, often at the expense of other groups — secular Jews, Arabs, and the socioeconomically disadvantaged, and always to the detriment of women. Most notable recent instances include massive public allocations for haredi incorporation into gender-separated units in higher education; separate elite courses for men and women in civil service (upheld just this past week by the Labor Court and now under appeal); and, of course, the creeping support for gender separation on buses, stages and billboards.

The almost bizarre image of Aharon Barak, the symbol of liberalism in Israel, speaking to a gender-segregated audience has evoked a public uproar. In his defense, the Justice has repeatedly explained that his acceptance of gender separation in these particular circumstances was motivated by a respect for the beliefs of his audience, haredi students, following the age-old adage of “when in Rome do as the Romans do.” This has only added fuel to the fire: his words have been repeatedly ridiculed and his reputation besmirched. What many have failed to realize is that Professor Barak astutely underlined that gender segregation is a widespread norm in Israeli society.

Personal beliefs lie in the private realm. Yet they cannot override or replace the principle of equality that governs social relations in the public sphere, so justifiably closely associated with the name of Aharon Barak for over three decades. Academic institutions are public even if they are not, as in the case of the Kiryat Ono College, directly financed by the state. They are also are not synagogues, in which those attending are rightly expected to abide by their customs. Even if Aharon Barak may have erred in determining that the college he chose to address lies in the private realm, his observation on the prevalence of gender segregation throughout Israeli society is spot on. Beliefs, especially in pluralist societies, require utmost respect; but under no circumstances are they a substitute for the founding principle of equality.

This is why many of the explanations for insisting on gender separation in special programs for the ultra-orthodox remain specious. The claim that this is a temporary and proportional move under the circumstances does not hold water since it lacks a time limit. Equally troubling is the suggestion that haredi incorporation, at the moment, is so pressing that it surpasses “mild” slights to women. Indeed, by equating women with other social groups, one constantly belittles them: they constitute half of every community and are as diverse as society itself. And most tellingly, condoning the separation of men and women actively perpetuates social divisions that extend to other groups as well.

This separation has enabled the adoption of discriminatory legislation, most recently the first reading of the basic law on “Israel: The Nation State of the Jewish People” that includes a passage enabling the construction of socially distinct communities. It lies behind an alarming rise in prejudicial practices involving citizens of color, Mizrahim, non-Jews and, of course, women. Free interaction in pluralist societies continues to be a cornerstone of democracy; discouraging such exchanges promotes their closure.

It is but a short step from putting particular groups behind partitions in public spaces to rendering certain knowledge inaccessible behind opaque screens in the common domain. The curtains placed to hide a visual presentation of the history of evolution (which defy the orthodox belief that the world is 5,778 years old) in Jerusalem’s Museum of Science were intended to satisfy orthodox visitors. The museum’s director admitted unrepentantly that the deliberate blackout was designed as a gesture to attract religious audiences, thus boosting the institution’s dwindling attendance.

He obviously forgot what public museums are all about. They are constructed to inform, commemorate, educate, stimulate, challenge, tantalize, confront and, always, invite inquisitiveness. By selectively exposing or covering facts to satisfy specific audiences, they are making a mockery of the wonders they purportedly seek to exalt. In this case, in hiding inconvenient scientific knowledge from certain groups, they distort the meaning of currently available facts and bend them to particularistic beliefs. When they begin to decide what exhibits are suitable for specific audiences, they shamefully defy their own purpose. What may be good for business makes a mockery of their mission.

Behind the obvious absurdity inherent in this example (many similar instances of veiled exhibits abound) rests yet another deep norm in Israeli society: the acquiescence to widespread secrecy in the public realm. If the guiding rule is that information in a democratic society can be selectively withheld or that some knowledge may be hidden not only on the basis of identity or belief, but also for broad and unspecified reasons of “public interest,” then the flow of information is interrupted and the free marketplace of ideas – the heart of free societies – is critically compromised. That is why transparency is so central to the security, economies and smooth operation of the most advanced countries.

The acceptance of selective access to public information also makes the manipulation of that norm so much easier. This is especially true (and in extenuating circumstances, justifiably so) on matters of security. So when Benjamin Netanyahu used prime time to reveal the history of Iranian nuclear intentions, it was a relief to see some curtains removed, although how this information should be used to determine ongoing policy is still open to debate.

Only a few hours later, however, the principle of transparency, and its evidence-based corollary of accountability, was dealt a near-lethal blow with the enactment of an amendment to the Basic Law: The Government, which grants the security cabinet and, in extreme circumstances, the prime minister and the defense minister (often the same person) alone, the authority to declare war, thus bypassing full government oversight. This move, propelled by the widespread admissibility of the norm of secrecy, not only grants unchecked power to (at most) two individuals, it also makes a mockery of the principle of transparency. One can only pray that is never abused.

Barriers, then, are constantly being erected in Israel during the second decade of the 21st century: between groups of people, between facts and beliefs, and between the government and its citizens. These partitions sustain all sorts of distortions domestically and along Israel’s frontiers. They also buttress a growing illiberalism on a variety of fronts. Only the ingrained Israeli inquisitiveness to see beyond the veil, and an insatiable curiosity to expose what stands beyond the multiple divides will prevent the curtain from coming down on Israel’s open society.