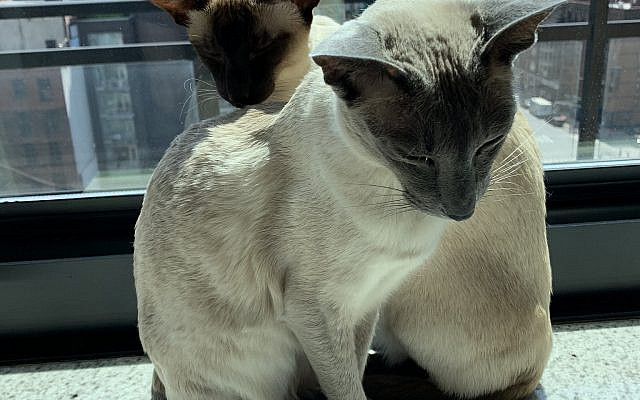 My siamese cats sheltering in place

“The measure that determines liability for an ear of grain is equivalent to a lamb’s mouthful.”

Today’s Daf Yomi returns to the discussion of carrying out, which until today I thought we had already analyzed every permutation possible. Today’s text examines the prohibition against carrying objects on Shabbat through the discussion of animal and human foodstuffs. We learned in Berakhot 40 that one should feed his animals before himself. This is one of the kinder and more humane passages in the Talmud. We should not sit at a table appeasing our own appetite, while our loyal animals go hungry.

The discussion today first focusses on the rules associated with carrying animal food in the public domain on Shabbat before it discusses human food, which seems appropriate due to the requirement to take care of an animal’s needs first. We learn about the measures of animal food that are allowable. In essence, it is just a little bit less than what would fit inside an animal’s mouth. If the foodstuffs measure greater than straw that would fit into a cow’s mouth or a type of straw called “etza” that would fit into a camel’s mouth they are prohibited from being carried. We are also told that the measure of liability for a lamb’s meal is the equivalent of ears of grain that could fit into his mouth and if grass is to be carried it should fit into a goat’s mouth. I imagine Rabbis with their long flowing beards placing their heads inside animals’ mouths in order to precisely calculate allowable measures of food.

The measure of human food that that is allowed to be carried into the public domain on Shabbat is the equivalent of a dried fig-bulk. We are told that the calculation applies to the edible item itself and not its shell, seeds, stem, or husk.  Rabbi Yehuda says that lentils are an exception to the principle because they can be cooked and eaten with their shells intact.  Wine is measured through a cup diluted with water, while milk is allowable in single gulps. Honey is limited to the amount that can be placed on a womb for healing and oil is limited to what can be placed on a small limb.

The discussion of animal foodstuffs reminded me of the Talmud’s stated obligation to take care of animals that are dependent on us for their nourishment and well-being. I live with two Siamese cats who have been sheltering in place with me since the second week in March. Today it dawned on me that I am living their life, as I am home every day and mostly protected from the world.

I have always wondered if it is humane to keep our animals inside because mine live their entire lives in a city apartment. There is an ongoing debate in the cat world about if it is acceptable to let cats roam, with very different views in the United Kingdom where there is more of a tendency to provide them with full access to a garden and the United States where many believe that cats should be kept inside. I am too protective to allow my cats to wander, which would not be viable in the middle of Manhattan anyway. But now I know what it is like to live their life. It is not the most exciting life imaginable eating the same food every day and chasing the same stuffed mouse, but it’s safe.