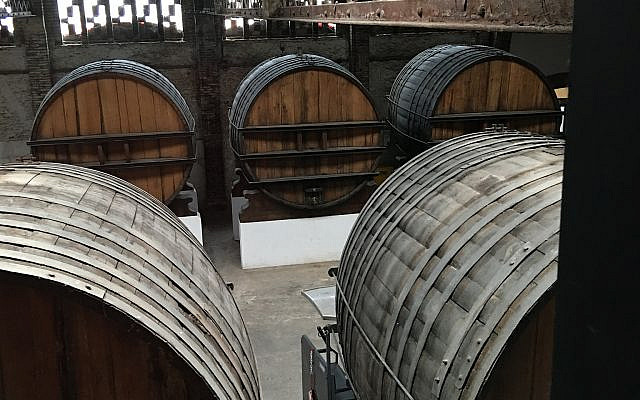 Photo taken during a Cava wine tour in Barcelona

“He who lifts the downtrodden over the mighty.”

The Rabbis lead us on a tasting tour of ancient wines. We are told that if one carries into the public domain on Shabbat undiluted wine, he is only liable if he carries out a measure that is “equivalent to the wine typically diluted for a cup.” Rava supports this assertion by stating that “any wine that does not hold one part wine diluted by three parts water is not wine. Wine must be sufficiently potent to be capable of being diluted with water three times its measure.”  In other words, the tasting tour we are on is focused on the level of alcohol in the wine rather than its tannins and taste.

The Rabbis get a little bit drunk during the tasting as the helpings were overly generous and the wine strong. As they sat around clinking their glasses and offering blessings to each other, they imagined what the world would be like if the little guys were to take it over. They conjured a world where a small creature would scare away a lion, a mosquito would cause an elephant to cower in his large feet, a gecko would terrify a scorpion, a swarm of swallows would hover over an eagle and cause it to fly away in terror, a small fish would threaten a whale.

They are so taken with their vision of a world turned upside down, that they tell tales of Rav Yehuda who would have an answer to any query, no matter how outlandish. This includes why a camel’s tail is short (in order to not get entangled in thorns) and why an ox’s tail is long (to fend off mosquitoes in a swamp.) They are so taken with their vision of how Rav Yehuda would explain the natural world that they continue into the night reciting questions and answers to explain its mysteries. Why is the antenna of a grasshopper soft? So that it will not break off so easily and cause the creature to go blind. Why does the lower eyelid of a chicken fold over the upper one? The answer to this one brought a huge belly laugh to the Rabbis: because a chicken lives in the rafters of houses and its eyes are protected from smoke when it is perched high. The Rabbis continue on like this for hours and hours and become giddier and giddier until they are convinced they have accounted for all the mysteries of the world and fall into a deep sleep.

It feels like today I am living in an upside-down world like the Rabbis  imagined in today’s text, where a tiny but mighty virus can frighten an entire civilization into shutting itself down. I am hoping that this is just a short-term pause and things will in time go back to normal, like an extended Shabbat. I miss my old life terribly and now I realize how much I had that I never truly appreciated, such as the freedom to travel anywhere in the world (Morocco, Thailand, Israel and England were a few places I visited over the last few years). There is a lot I miss – my hair-stylist who every month sent me out into the world feeling renewed, dark movie theaters where you could lean back and allow the large screen to wash over you, Sunday brunch at my favorite place in Chelsea where the spicy rancheros huevos was always predictable, and siting at a wine bar with a glass of cabernet thankful to be among the tribe of New Yorkers with their gritty accents and special breed of resilience.