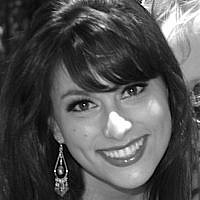 The Blogs
Lara Dvora Berman
Apply for a Blog
Advertisement
Please note that the posts on The Blogs are contributed by third parties. The opinions, facts and any media content in them are presented solely by the authors, and neither The Times of Israel nor its partners assume any responsibility for them. Please contact us in case of abuse. In case of abuse,
Report this post.

Get ready for dancing! We need it, don’t we? What other people besides the Jews have the audacious spirit to sing and dance in the face of hate and terrorism? This instinct to unite in song and dance contrasts starkly with Israel’s enemies’ compulsion. In case you haven’t heard about it, here’s a handy-dandy Hate Fest Round-Up:

GERMANY: The anti-Semitic genie left the bottle as Islamists and neo-Nazis (because birds of feather, etc, etc) united in Berlin and Frankfurt to protest, hurl stones at police officers, and denounce Jews as sub-human animals. [Monday, June 14]

UNITED STATES: Anti-Israel protesters in Seattle screamed anti-Israel slogans and blood libels, claiming Jews kill and eat gentile babies and drink their blood. (More ironic because Kashrut laws forbid Jews to eat any animal blood.) Their unbridled, anti-Semitic spectacle climaxed with a call to destroy the Jewish state, and demonstrated again that anti-Zionism is indeed just anti-Semitism repackaged. So to be clear, they accused Israel of genocide, but in the same breath called for the extermination of the Jewish state. Clearly their continuity person was out to lunch. [Monday, June 14]

No, this isn’t in the Middle East. This is Paris, France.

FRANCE: A peaceful protest in Paris turned violent when anti-Israel mobs chanting anti-Semitic slogans cornered 200 Jews in a synagogue and hurled stones at them. At least 3 Jews wound up in the hospital as a result. [Sunday, June 13] This is one of a series of anti-Semitic attacks in France recently that include firebombings and stabbings. No, this isn’t the Middle East, it’s London, England.

MOROCCO: A popular rabbi in Casablanca, Rabbi Moshe Ohayon was beaten on Shabbat on his way to Friday-night services. The Arab attacker said it was “revenge for Gaza” and committed the assault in broad daylight. Passersby did not heed the rabbi’s calls for help. The Rabbi’s nose and ribs were broken. [Friday, June 11]

AUSTRALIA: A former IDF soldier in Melbourne was attacked from behind, beaten and cut by a knife by several Arabs who called him a “Jewish dog.” [Thursday, June 10]

AND MORE: Thousands in Japan, Malaysia, India, Egypt, Pakistan, Norway and Indonesia marched in solidarity with Hamas, burning Israeli flags along the way. A popular hashtag trending in anti-Israel circles is #HitlerWasRight.

Think there’s a growing harassment of Jews? Have we entered a time when freedom lovers exercising their freedom of speech and religion risk assault? Will this improve as Islamic-supremacists continue to topple regimes, seize power and weapons, silence dissidents, and populate the West? You decide.

In the face of hatred, the Jewish people sing of Hashem, unity and miracles and let their song drown out the vicious chants of their depraved enemies.

This hatred is what Israel faces. And yet, her people choose to dance. They dance on the front line. They dance at the rallies. They sing of Hashem, unity and miracles and let their song drown out the vicious chants of their depraved enemies.

There’s a lot of darkness out there. But we are the dancers, the singers, the light. So, let’s get to it, ’cause that’s what we do!

Our Brave IDF Soldiers Sing Their Way to the Kotel

Even During War, IDF Soldiers Sing of Faith & Miracles

A Beautiful People – We Sing and Dance to Silence Hate

About the Author
After many years as a broadcast and print journalist, I’ve started this blog, "Joyish" to share my brand of Judaism. I don’t take myself too seriously, but I crave meaning and for me, Judaism provides it. Living Joyishly makes life sweeter, deeper, more fun and meaningful. I don’t pretend to be a rabbi or the most religious person in the world, but I’ve chosen my teachers with care and if something here inspires you, run with it, and make the world brighter wherever you go. ♥, Lara Dvora
Comments