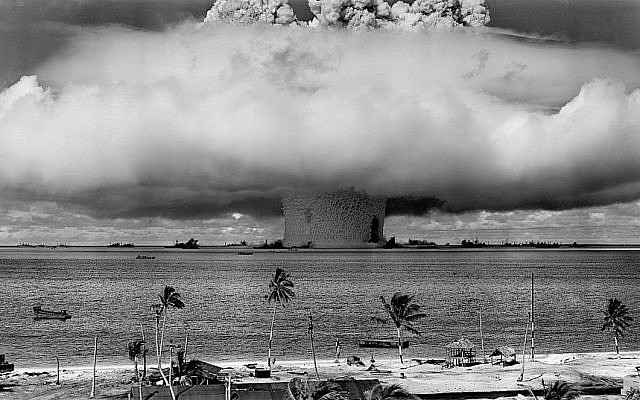 The "Baker" Explosion, part of Operation Crossroads, a US Army nuclear test at Bikini Atoll, Micronesia, on July 25, 1946.: United States Department of Defense (either the U.S. Army or the U.S. Navy)Derivative work: Victorrocha, Public domain, via Wikimedia Commons

Maybe if we could tell the Passover story to each other using only intransitive verbs we could get past the illusion of symbolism. The idea of X doing something to Y and therefore meaning Z. It all just happens, all subject, no objects. Nothing carried in the action, every noun in the story doing its own thing all at once.

I could just sit at the table and smile like a Cheshire cat because there’s really nothing to say. But where’s the fun in that? Language doesn’t have to be limiting. Any word, any verb, whether transitive or intransitive, produces an energy. When you experience that word, what you experience is its energy within you. It’s already there. But the word calls your attention to the energy.

So if there’s any shift occurring at all, it’s a shift in attention. And when the word is attached to a physical object and you hold that physical object in your hand, wow. The paschal sacrifice, the bitter herb, the bread of affliction. It redefines your hand. Each of your five fingers and your palm suddenly aware of the vibration of this object, its name. Close your eyes and take that hand with you, it’s no longer your hand. It’s a hand or maybe the hand. An energetic vessel. A tuning fork. The tendrils of a sea anemone. If you’re really paying attention, this is a dangerous business, the holding of objects and the meditation upon their names.

At the Passover Seder we are in a constant state of danger. Danger, loss and celebration. The ordeal of Spring. Crank up the transmogrification, Scotty. How many realities can you hold in your head at one time? Sometimes it’s fun to drill down to the tiniest, physical, atomic detail just to see what’s living there. I got drawn into a vortex one year at the celebration of the second seder. It was a very weird night. There was a crackling edginess in the air, political skirmishes breaking out at all sides of the table. At one end of the table, two longtime members of the congregation decided to trot out their conservative versus liberal diatribes. Across from the rabbi, a kindly seeming grandfather, schlepping his delightful little granddaughter and her friend, demanded the rabbi answer for the Israeli treatment of Palestinians. Right next to the rabbi sat a very smug looking young man in a double-breasted blue blazer bearing a lapel pin from the Ayn Rand Institute.

He wanted to make it very clear that he had no need for the concept of God. He had an inner moral compass, whatever that’s called where he comes from. But the sacrament of Passover is incorruptible. At the rabbi’s instruction we all built ourselves our own private transmogrifiers or time machines, AKA seder plates, with ingredients at hand. The table was strewn with ‘instruction manuals’, haggadot and other holy s’forim, of varying levels of detail. I picked up one obscure Talmudic tome and was intrigued by a deceptively simple explanation for one of our central Pesach customs. It said that the bitter herb, maror, is dipped into the charoset, that sweet, sticky mixture of wine and fruit and nuts, in order to detoxify it of the ‘kappa poison’. Turns out most bitter roots contain cyanide compounds. The cyanide is off-gassed by exposure to  certain enzymes which happen to be present in fruits with red skins. The energy of maror is the energy of actual death. And the energy of charoset is the energy of the sweetness of death averted. Wow. Jewish fugu.

You must eat the delicacy presented to you by your host knowing that, improperly prepared, it could kill you, or cause significant neurologic illness. That’s a trip. Not your average suburban seder. Can you feel the danger in that? Death and transfiguration at the seder table. The trouble is it may be so literal as to render it meaningless. We don’t worry about such things anymore as our crop of bitter herb is more tame. It’s all symbolic. And with that the entire seder table collapses under the weight of its own symbolism, brought down to floor level. Scraps for dogs. No wonder we ended up wandering forty years in the desert. Too scary to bear the weight of reality directly. Dog and Lead Man, Caleb and Joshua, were the only two of the twelve spies who were game for wrestling with giants.

A black limousine pulls up to the shore of the Reed Sea just as two walls of water rise opposite each other, revealing dry land between. A man in dark glasses and a fedora gets out the back door unassisted and falls prostrate on the wet sands. His body is taken up by the newly exposed plant life on the seafloor, a piece of him in every plant that populates the exposed surface. So I ask you, in this case, has he crossed the Reed Sea?  A woman steps into the sea on one shore and emerges on the other. Is it the same woman?  Do you know her by the timbrel she plays? Danger at every step. How can you say that energy and matter are not the same? Yes, the evidence is indirect.

You never see the two of them at the same time in the same place. Very suspicious. Attenuate the poison, consume a little bit of it everyday. Maybe it will protect you from parasites or maybe it will cause paralysis. It depends on the dose. It depends on you. It is a daunting heuristic the rabbis have given us. We must seduce our students into drawing close to their own annihilation. How many would sit at the table if they knew that was in store? No thanks, I’ll pass on the fugu.

Yet that is exactly what we are asking everyone to do, everyone who cares to keep the paradoxical order of Passover. Paradoxical in that this meal called ‘order’, if done with proper kavanah, induces a kind of existential chaos. Will I live or will I die?  Sometimes I can barely contain myself for the excitement, so much happening all at once in one night at the table. I fully expect one year I may sit at the table and be so immersed in it that I won’t return at all. I’m not sure what that would look like. Probably nobody would notice.

Maybe it wouldn’t look any different than any other year. But I would know. It would smell different and that smell would permeate every cell in my body. From the well of the bubbling spring to the place of a thousand meeting points. It would be hard to stand up from the table. My four limbs fused with the legs of the table, my head poking awkwardly out the middle. But as I said, it’s likely that no one would notice. I would be circumspect and wait for a propitious moment to sidle out the door, the leftover vittles on my back.

Thanks, lovely evening. Next year in Jerusalem. Oh and I forgot, that would happen after all of the delightful singing of paradoxes at the end of the seder, all those children’s songs about death and transfiguration. It’s impossible, and that’s why I enjoy it so much. One impossible year after another. Both grief and elation, the bread of affliction and the cup of redemption. Can you feel it?

About the Author
Michael Diamond is a writer based in the Washington, DC area. He practices psychiatry there and is a doctor of medical qigong. He has published verse, fiction and translation in Andrei Codrescu’s journal, The Exquisite Corpse; in the journal Shirim courtesy of Dryad Press; in the online journal for Akashic Press; in New Mexico Review, The Deronda Review and in The Journal of the American Medical Association. He lives in the suburbs with his wife, an artist and illuminator of Hebrew manuscripts, their dog, two cats, a cockatiel named Peaches and a tank of hyperactive fish. He has had a strong interest in Torah since first exposed to traditional stories as a child. Over the course of his life he has run the gamut of spiritual exploration of many world traditions of meditation and mythology. For the last several decades he has landed squarely in the traditional Jewish world. His writing is informed by all of this experience, by his curiosity about today's world and by his desire to mine the Jewish experience for its hidden and revealed wisdom. Torah Obscura, a glimpse of an otherwise invisible world afforded by a small aperture for light. All materials herein copyright © 2018 Michael S. Diamond. All rights reserved.
Related Topics
Related Posts
Comments