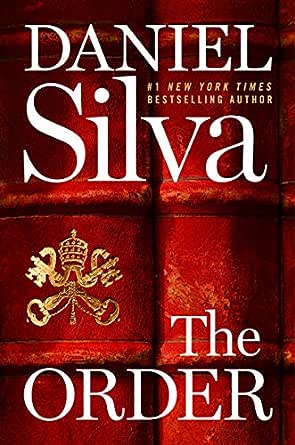 Daniel Silva’s newest pulse pounding thriller, THE ORDER (Release date July 14, 2020), will not disappoint. Art restorer and head of Israeli Intelligence, Gabriel Allon, is off on holiday imposed on him by his long-suffering wife Chiara. She alone decided he needed time away from the chaotic life he leads to properly recover from injuries he sustained in a bombing in Paris. After Gabriel’s feeble but futile insistence that he was fine and did not need a rehab vacation, off they flew to Venice. Upon arrival they took up residence in Campo di Ghetto Nuovo, a centuries old Jewish enclave; the only neighborhood in all of Venice requiring round-the-clock police protection.

It was agreed that workaholic Gabriel would spend his time with the family and occupy any spare time doing art restoration, but the unexpected and sudden death of the Pope Pietro Lucchesi would lay waste those plans. Although the Pontiff was known to have a heart condition, his unexpected and sudden demise came as a shock. Worse yet, his death was soon found to be cloaked under a shroud of mysterious circumstances.

As is the custom in Silva’s novels, the plot is laced with intrigue and mystery, silhouetted against the sweeping panorama of Europe, with fly overs to the Middle East. A clandestine neo-Nazi organization, known to its members as the Order of St. Helena, was of utmost concern to those in the upper echelons of the Church who detected a recent rise of fascism within its ranks. The organization was made up of members of the Catholic curia hierarchy, business magnates, and government heads of state. Its members planned to seize the papacy and wield its power for the benefit of European National Socialism. The Order, as it was referred to by its members, was pure evil, which should come as no surprise, as its members were inspired by their patron saint, Adolph Hitler.

Gabriel’s holiday of recuperation was short lived as he was recruited by his friend, Archbishop Luigi Donati, the personal assistant to the Pope, to investigate the suspicious nature of the death of the Pope and the alarming growing sphere of influence of The Order.

Together Gabriel and Italy’s handsome, Archbishop Donati, joined forces to frustrate the ambitions of that unholy alliance of the curia. They recognized if The Order were successful, it would be an existential threat to the Church, Israel, and Europe’s surviving remnant of 1.5 million Jews. The only impediments to The Order’s plans were Donati, Allon, and Israeli Intelligence, affectionately referred to as the ‘boys’ and ‘girls’ of, The Office.

It was inevitable that The Order would butt heads with Donati, Allon and his team when it was discovered that they planned to break into the Vatican Secret Archives in search of a book rumored to be the Gospel of Pilate. If the gospel did exist and were to be spirited out of the Vatican, its contents would ignite a global firestorm, and frustrate the ambitions of The Order.

Disguised as a priest and using Archbishop Luigi Donati as cover, Gabriel managed to breach the impenetrable Archives in search of the alleged gospel. But would he and Donati be able to extract that ancient work, which could lay bare the Christian lie of deicide by the Jews, a fabrication that is universally regarded by scholars as the foundation of anti-Semitism.

Uncharacteristic of Silva’s novels, this rendering has several elements which, until now, were not present in his earlier novels. First there is a veiled hint of the engagement of the supernatural, second, there is only a passing reference to the former head of the Office Ari Shamron, and third, the injection of political barbs, that interrupted the ebb and flow, of what is otherwise a fast paced and riveting spy story.

Setting those three atypical elements aside, Silva still proves to be a master weaver of tales of international espionage and assassinations. One cannot help but marvel at his uncanny prescient knowledge of events unfolding today and those of tomorrow.