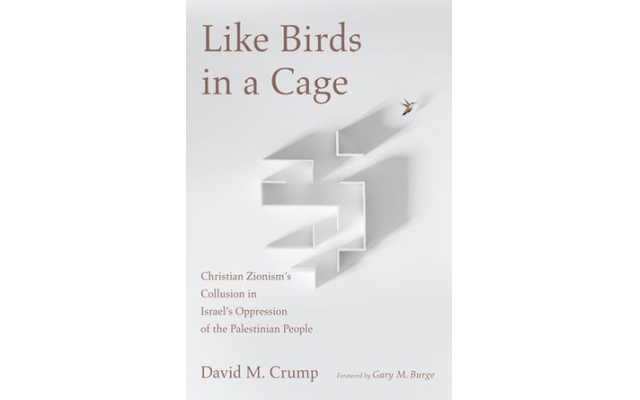 Like Birds in a Cage (Wipf and Stock publicity photo.)

David M. Crump, a former pastor and retired professor at Calvin University in Grand Rapids, Michigan, doesn’t buy the idea that hostility toward Israel qualifies as antisemitism. By his lights, anti-Zionism is not motivated by hatred of Jews, but by outrage over Israel’s policies toward the Palestinians. He makes this case in his amazingly hostile text Like Birds in a Cage: Christian Zionism’s Collusion in Israel’s Oppression of the Palestinian People (2021, Wipf and Stock).

Citing Judith Butler, who once described Hamas and Hezbollah as part of the “Global Left,” Crump alleges that the charge of antisemitism “is an act of war” against Israel’s critics, whom he regards as just trying to make life better for the Palestinians (whose misdeeds aren’t worth recounting). “The story of modern Israel is a story about Palestinian suffering,” he declares. “Like every Western, settler colonial enterprise, the nation of Israel was born in cruelty and bloodshed.” (The author seems to forget that Jews are indigenous to the land in question, were themselves refugees when they returned, and themselves had been the victim of oppression in the Middle East.)

Crump directs much of his ire at Ashkenazi Jews who fled destruction in Europe to establish a sovereign Jewish state in Palestine. The way Crump sees it, these state-founding Ashkenazi Jews should have transcended their anger over the mistreatment they endured in Europe and relied on “Oriental Jews” living in the Holy Land to make peace with Arabs and establish a bi-national state where Jews could live in safety.

In Crump’s view, the survival of the Jewish people did not require a state with a sovereign Jewish majority, just good behavior on the part of the Jews. If only Israel’s Ashkenazi founders had responded more irenically to being driven out of Europe, and didn’t think and act like Nazis, the Arabs might have taken them in with open arms. But sadly, Israel’s founders did not learn the correct lessons from the Holocaust, but instead imitated the Nazis, Crump declares. “Sadly, being the victims of European antisemitism prepared many Zionist settlers to become antisemites themselves, mistreating local Palestinians with impunity,” he writes.

In his efforts to portray Israel’s founders as antisemitic Nazis, Crump distorts history egregiously. For example, he describes Theodor Herzl as promoting as an “ethnocentric vision” that was “cynical,” “fatalistic,” and “naively Romantic.” Crump adds, “Unfortunately, Herzl’s formative embrace of an organic, tribal nationalism, centered as it was around the mystical union of ‘blood and soil,’ will forever flag political Zionism’s historical kinship to the National Socialist party and Nazi Germany’s Third Reich.”

To portray Herzl as a proto- or cypto-Nazi, Crump omits any reference to Herzl’s hope for Jews and Arabs living in peace in the state as enunciated in his text, Altneuland. And there’s Crump’s dishonest description of Der Judenstaat as a text rooted in “the many disappointments of Jewish Emancipation.”

Herzl wasn’t “disappointed” with the failure of Emancipation in Europe to bring about improvements in the Jewish condition. He was afraid of what was going to happen next. He had covered the trial of Alfred Dreyfus, the French Jew falsely convicted of espionage on behalf of the Germans in 1895. He was at the parade ground at the Ecole Militaire in Paris where the crowd shouted, “Death to Judas! Death to the Jew!” during Dreyfus’s degradation ceremony. He knew what would happen next. Herzl’s desire for a Jewish state wasn’t rooted in “disappointment” over the past but desperation about what the future held.

Most egregiously, Crump invokes the writings of Lenni Brenner, an anti-Zionist Jew whose writings have been sold by David Irving’s Institute for Historical Review (a Holocaust denial outfit), to highlight Jewish “collaboration” with the Nazis before the Holocaust. To promote this hoary old trope of Soviet propaganda, Crump relies in part on Brenner’s characterization of Georg Kareski, a German Jew who wrote nice things to and about the Nazis in 1933, declaring for example that just as the Nazis wanted a rebirth of German National life, so did the Zionists.

Yes, Kareski was wrong to say nice things to the Nazis about their ideology, but he had a legitimate motive — to get Jews out of harm’s way. Kareski lived in a time when the world was, as Chaim Weizmann put it, “divided into places where Jews cannot live and places which they cannot enter.”

“Kareski was a self-important fool, but his plan was hardly to hand over his fellow Jews to the crematories of Auschwitz,” historian Walter Laqueur wrote in 1987. “He proposed rather, the evacuation of all German Jews over a period of 25 years—a utopian project, but not a murderous one.”

Clearly, Crump should have done a bit more digging into Brenner’s career before relying on his “scholarship.” Kenneth S. Stern, an expert on antisemitism and a foe of right-wing hate groups, described Brenner as an antisemite and a proponent of Holocaust Denial from the left. “Lenni Brenner, himself a Jew, is anti-Zionist and anti-Semitic. ‘Just as there were no good Nazis, [Brenner] said, there are no good Zionists,’” Stern reported in 1993.

While Crump relies on the writings of antisemites to portray Zionist leaders (who were trying to get their fellow Jews out of harm’s way) as having “collaborated” with Nazis, he doesn’t mention Haj Amin Al Husseini, who collaborated with the Nazis to keep Jewish children in death camps.

That’s not all. As I have documented elsewhere, Crump uses a mistranslation of a statement from Mahmoud Ahmadinejad to downplay Iran’s hostility toward Israel.

Crump’s efforts to obscure these and other misdeeds on the part of Arab and Muslim leaders in the Middle East is profoundly consequential. If one were to look at these evil acts and statements for what they are, and not downplay and ignore them — as Crump does — one might start to see Christian Zionist support for Israel in a different light. Instead of regarding Christian Zionism as a retrograde theological movement that promotes Jewish atrocities against a native people, Crump’s readers might regard it as legitimate and providential response to the ongoing war against the Jewish people, which sadly continues to this day.

In the Middle Ages, Christians in Europe portrayed Jews as unfit neighbors guilty of deicide, saying in effect, “How could the Jews ever be regarded as the ‘chosen people?’ Look at all the terrible things they did in the Bible!” (The Bible, interestingly enough, was written by Jews as an extended act of self-criticism and internal debate.) The result was terrible oppression of Jews in Christian Europe.

After Jews were Emancipated in Europe in the late 1800s, commentators such as Édouard Drumont, founder of The League of Antisemites in France, and Wilhelm Marr and Richard Wagner — antisemitic writers in Germany — took up the cudgel against the Jews. These and other writers portrayed Jews as unfit recipients of the rights of citizenship accorded to them by their gentile neighbors, declaring in effect, “Look at what those evil Jews have done with the rights we gave them! They have taken over our economies and polluted our culture!”

The end point of these polemics was to transform Jewish identity into a death sentence for two-thirds of Europe’s Jews.

Now that the Jews have a sovereign state of their own, Crump is updating the old-new narrative, telling the world that political Zionists, his shorthand for Israeli Jews, have abused the right of self-determination, declaring in effect, “How can Christians support Israel? Look at what those political Zionists (Crump’s dog-whistle for sovereign Jews) have done with the right of self-determination! Look at what they’ve done to the Palestinians – the same thing we did to Native Americans! They must repent!”

And through it all, Crump and his allies do everything they can to distract their readers from the misdeeds of Israel’s adversaries in the Middle East that would cause people to think Israel’s establishment was a good thing and that Christian support for Israel isn’t the sin Crump says it is.

Predictably, the author alleges that there is no such thing as the “New antisemitism.” On this score, he’s right.

Crump’s book, which escorts its readers into an all too familiar realm of anti-Jewish contempt, is a case in point.