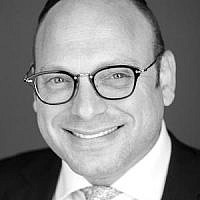 The Blogs
Duvi Honig
Apply for a Blog
Please note that the posts on The Blogs are contributed by third parties. The opinions, facts and any media content in them are presented solely by the authors, and neither The Times of Israel nor its partners assume any responsibility for them. Please contact us in case of abuse. In case of abuse,
Report this post.

The Senate Foreign Relations Committee made the wise decision to send the nomination of David Friedman as US Ambassador to Israel to the full Senate for a confirmation vote. It was heartening to see my home state Democratic senator, Bob Menendez, join the Republicans on the committee and send the nomination to the floor.

During Mr. Friedman’s appearance before the Committee last month, Senator Menendez questioned the nominee very aggressively. Nevertheless, he ultimately saw through the smear effort by Mr. Friedman’s opponents. He saw what I and everyone else who knows Mr. Friedman on a personal basis knows: David Friedman is a man of impeccable integrity, skill and fairness – a man who doesn’t have a hateful bone in his body.

I am proud to have been amongst those who have reached out to Senator Menendez in recent weeks to attest to the true character of the ambassador nominee. The more that US Senators, as well as diplomats from around the world, see of Mr. Friedman, the more they like him. Hopefully, when the full Senate votes on the nomination, there will be other Democratic senators as well who will buck the pressures of politics and special interests, and will vote to confirm Mr. Friedman.

No one has been more forthright and apologetic than Mr. Friedman himself regarding the isolated occasions in which he used language to describe opponents that he now regrets. What is far more important at this point are the policies that he will pursue in this position, and the character with which he will approach this difficult work.

Much attention has been paid to Mr. Friedman’s stated opposition to the “two state solution” to the Israeli-Palestinian conflict. It is frankly baffling to see how much Mr. Friedman has been vilified by Senators and others for these statements. The reality is that Mr. Friedman’s principles and vision result from his genuine concern for the best interests of the Palestinian people.

Individuals of good faith can disagree over what path they believe is best for Israelis and Palestinians to coexist in harmony. However, it is crucial to recognize that one can be skeptical of the two state solution in good faith as well.

Mr. Friedman desires as much as anyone else to see an end to the acrimony and bloody conflicts that have cost the lives of so many innocent Israelis and Palestinians over the past decades. He would love to see peace loving Palestinians enjoy a future of peace and economic opportunity, a future in which they view no Jew with suspicion or fear.

That is precisely why he expressed serious reservations about establishing state for Palestinians under the leadership of entities such as terrorist Hamas – which sends its own people to slaughter in order to murder Jews – and even the ostensibly moderate Palestinian Authority.

The United States along with other members of the international community send billions of dollars of aid each year to improve the lives of Palestinians in the West Bank and Gaza. These are regions with a per capita income of approximately $2,000 or less. If utilized properly, these aid funds could have immeasurably improved the lives of the Palestinians and their income potential.

Instead, a very large portion of these funds are embezzled by corrupt government officials and terrorist leaders for their own personal wealth; to inculcate children with hate and incite them towards violence and suicide; to harm their local economies; and to incite wars that have brought upon devastating destruction for both Israelis and Palestinians.

Mr. Friedman is a man of love and compassion, a visionary of true peace. He envisions a future in which Palestinians enjoy a government that prioritizes freedom, quality roads, schools, hospitals, farms and factories over bombs, rockets and suicide vests. He envisions a world in which the sight of Palestinians working in harmony with Israelis in a factory like SodaStream, earning respectable income and benefits, is a cause for celebration – not destructive opposition, as BDS and other anti-Israel movements have done.

A uniquely successful bankruptcy attorney, Mr. Friedman has proven his mettle in bringing opposing sides together towards a mutually beneficial resolution. He is open minded and has openly stated that he would support a two state or similar solution to the Israeli-Palestinian conflict, provided that both parties agree to it and that it is realistically promising to bring peace and prosperity for both peoples.

I encourage good citizens of all faiths to reach out to their Senators and implore them to support this supremely qualified nominee. The people of the United States, Israel, Palestinian Territories and the entire world stand to benefit.

About the Author
Duvi Honig is the Founder and CEO of the Orthodox Jewish Chamber of Commerce, a global umbrella of businesses and community leaders that promote economic opportunity and positive public policy initiatives. The Orthodox Jewish Chamber of Commerce has been at the forefront in the battle against UN anti-Semitism and the BDS movement, which seek to harm successful business activities around the world.
Related Topics
Related Posts
Comments