The Yiddish Word “Mensch” means a person with integrity and honor. But it means more than that:  it is a person who is compassionate and kind. 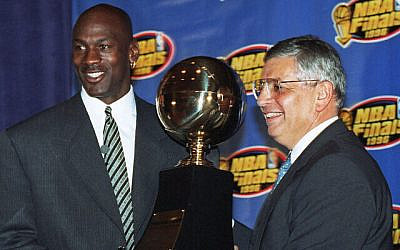 FILE – In this June 18, 1996, file photo, Chicago Bulls’ Michael Jordan, left, receives the NBA Finals Most Valuable Player trophy from Commissioner David Stern during a ceremony in Chicago. David Stern, who spent 30 years as the NBA’s longest-serving commissioner and oversaw its growth into a global power, has died on New Year’s Day, Wednesday, Jan. 1, 2020. He was 77. (AP Photo/Charles Bennett, File)

I never met David Stern, who died on the first day of 2020, three weeks after suffering a brain hemorrhage.  He will be remembered for a career that transformed the National Basketball Association into one of the most successful sports organizations in the world.  With all of the accolades he has received over these many years, three examples of his compassion, kindness, humility and pride speak to the giant of the man he was.

First, his humility.  I will never forget when David hosted Natan Sharansky at Madison Square Garden. Sharansky, the Israeli politician, former Chair of the Jewish Agency, human rights activist and former Prisoner of Conscience, spent nine years in Soviet prisons before his release in 1986 and his immigration to Israel.  I met Natan on a visit to the Former Soviet Union in the winter of 1976, just a month or two before he was arrested. 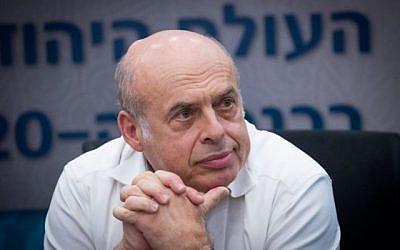 Jewish Agency chairman Natan Sharansky attends a meeting in the Knesset of the lobby for strengthening ties with the Jewish world, June 27, 2017. (Yonatan Sindel/Flash90)

In 1989, I reconnected with Sharansky when I picked him up from his hotel in Washington, D.C. to take him to speak to the students at Gesher Jewish Day School in Fairfax, Virginia, where I served as Headmaster.  On the way, he told me that he just arrived the night before from New York where he was David Stern’s guest at a New York Knicks basketball game.  It was his first experience attending an NBA game.  He shared with me that during the game a young kid came over to the NBA Commissioner, told him that “he was his hero” and asked for Stern’s autograph.  David told the youth, “Son, you don’t want my autograph.  I want you to meet a real hero—this is Natan Sharansky.”

Second, his pride. I will never forget the pride Stern felt in Omri Casspi becoming the first Israeli to be drafted to the NBA.  Who can forget the smile on David’s face when he announced in June, 2009 that Omri was the 23rd pick in the first round of the  NBA Draft? https://www.youtube.com/watch?v=NJT4RoKJkls.  In a Sports Illustrated article, Lee Jenkins wrote: “When NBA commissioner David Stern announced that Sacramento was selecting Casspi, Stern cracked a smile, which Casspi maintains was a little wider than usual. ‘Because he’s Jewish,’ Casspi reasons.” https://www.si.com/vault/2009/12/21/105888228/welcome-the-king-of-israel.  David will also be remembered by our city of Sacramento for his efforts to keep the Sacramento Kings from moving to Seattle.  And, he was instrumental in helping in the negotiations to build a world-class arena for the team, Golden 1 Center, the pride of our capital city.  For his part in helping Sacramento keep the Kings, the team honored Stern by making the address of the new Golden 1 Center 500 David J. Stern Walk.  https://sacramento.cbslocal.com/2020/01/01/david-stern-nba-commissioner-sacramento-kings-dies/

The third example that reflects his kindness and compassion occurred a few years before David Stern retired as NBA Commissioner.  A member of my congregation, Jerry Roth and his son Daniel, were visiting New York City and David invited Jerry and his son to meet with him at the NBA corporate offices on Fifth Avenue. Jerry and David were fraternity brothers during their college years at Rutgers. David, on many occasions, would stay in touch with Jerry and offer him and his family tickets to a Kings game, sitting in seats that are reserved in every arena for the NBA family.  During the meeting that morning at NBA Headquarters, Jerry shared with me that David, as busy as he was, spent almost an hour reminiscing with Jerry and focusing on Daniel, giving Jerry’s son advice on his future career aspirations.  He then asked Jerry if he and Daniel had plans for that evening.  When they told him they had no specific plans, David picked up his phone and asked his secretary to arrange for Jerry and his son to be his guests in his suite at Yankee Stadium that night. Jerry told me that he will never ever forget David Stern’s kindness.

Over the next days and weeks I am sure there will be lots of stories about David Stern and his impact upon the NBA, WNBA and the sport he never played professionally, but loved profoundly.  And I am sure there will be critics who will cite his toughness in negotiations and other business aspects of running one of the most successful sports conglomerates in the world.  But I hope that amidst all of the eulogies and tributes, that above all, he will be remembered as a kind and compassionate human being.  He epitomized what the word “Mensch” is all about.  May his memory endure as blessing.