Who is Vladislav Davidzon and why should it matter?  I initially met Vladislav at the 2018 International Conference on Yiddish Language and Culture that took place at Czernowitz (Cernivsti, Ukraine).

Soft spoken, a chameleon-like journalist, young, intense eyes are the first impressions that one may construe upon encountering Mr. Davidzon. 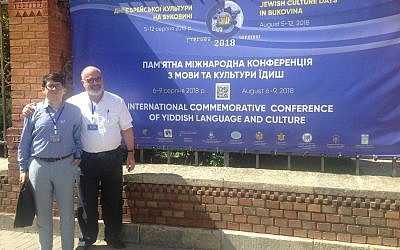 In fact, this young man who was born in Tashkent, is deeply philosophical, a purveyor of the finer things in life while also having his pulse on today’s pivotal events.  This Editor in Chief of the Odessa Review and a columnist for Tablet magazine and other major publications, wrote a pivotal incendiary piece that continues to stir an international scandal and uproar about proposals to change Babi Yar into an entertainment venue, a Disneyland.

Since 2016 the Babi Yar Memorial Project was tasked to create a memorial museum and study center at the place which represents the epicenter of where the crimes of ”Holocaust of Bullets (a term coined by Father Patrick Debois)” took place.  A place where around 100,000 souls, mostly Jewish were mass murdered over dug up ravines. A crime committed by the Nazis and their Ukrainian collaborators, while the village bystanders viewed it as the day’s entertainment.

There is a proposal to bring Babi Yar to prominence in the most modernistic of ways.  The memorial board is largely made up of the Ukrainian intelligentsia, and self-absorbed interest groups, whilst the $100 million dollar seed money for the project was provided by four  oligarchs, three of whom hold Russian passports.  To be fair, the supervisory board also consists of some respected notable international figures, but it is apparent, as Davidzon points out, that they are not influential in the current proposal and some have left the board in disgust.

The Board hired Ilya Khrzhanovsky, a controversial Russian filmmaker noted for his notorious sado-masochistic film, DAU, to be the project’s Artistic Director.  His megalomania and iron fisted ways are well documented. He replaced the entire creative staff at the Project.  As Davidzon writes in the May 26, 2020 issue of Tablet:

The process for entering the Babyn Yar memorial—a veritable labyrinth—would be the (following)…. Visitors would first submit to an invasive and humiliating questionnaire, based on the answers to which, one’s experiences would be assembled by a computer program—merely be the first of a series of power moves and minor cruelties to be inflicted in the course of providing a bespoke Holocaust reenactment experience….. Some would play act at being Nazis, others taking on the role of Jews or local (collaborationist) auxiliary police. Cutting-edge technology would be used to create the innovative experience, as visitors would wear reality glasses and would move through the exhibition making decisions that would open up new storytelling arcs. One’s own face might be projected by “deep fake” or hologram technology onto a Nazi camp guard as he committed acts of torture. Depending on one’s choices, one might arrive at a cafeteria that fed one the luxurious food reserved for Nazi officials, or the rotten gruel ladled out to prisoners.

The end game for nearly every visitor visiting Babi Yar is total annihilation, without the actual experience of dying.

Khrzhanovsky survived many of the controversies he started at the project.  The persistent question during the post-Holocaust Era should not be on Khrzhanovsky, but on the how to appropriately memorialize the Holocaust.

Holocaust Memorials have always been controversial.  What is the purpose?  What message are they trying to convey?  Elie Wiesel, before eventually chairing the building of the United States Holocaust Memorial Museum, said it magnificently in the sixties, “How does one convey the incomprehensible? Where does one begin? How can one get it right? Who would ever believe it?”   Mr. Wiesel was against the construction of museums dedicated to the Holocaust during his early days.  It was not until he realized that as we were entering the 21st century, that the Holocaust may be forgotten and considered past history, or at best, a footnote in history that he reconsidered his initial thinking.

Thus, museums and memorials, large and small, reflect the values of the country, the community, as well as the time they were built.  Compare the USHMM to Yad Vashem, to the Museum of Jewish Heritage to the Polin Museum of the History of Polish Jews.  They each have their own subtle and not so subtle differences.  They get the facts and dates right, but they are sending the patron a different message, their own world and in many cases, political view.

The question is whether Khrzhanovsky’ s view of the Babi Yar Project is truly outlandish.  If you look from the prospective of Holocaust educators, or from the USHMM or Yad Vashem, absolutely yes!

However, look at it through the prism of this nascent century, the 21st century, one can reach a different conclusion.

The world today is quite different from the last century.  Authoritarian regimes are rising, while democracy is dying.  The planet is warming and headed towards a doomsday trajectory endangering humanity.  Unknown pandemics are surfing up.  Human life is again of no value.  The endgame is the death of humanity, as the endgame of the Babi Yar project is also total death with a handful of survivors.  Thus, the Babi Yar project is not a memorial to the victims, but a reflection of these times.

Who best to head this project but a megalomaniacal, controversial figure whose formative years took place in a totalitarian society.  Outrageous yes.  Wrong, absolutely.  However, Mr. Khrzhanovsky’s contemporaneous vision is a sign of the times.  He is not creating a Disneylandish place “where dreams come true,” but a dark, nihilistic, dystopian park where nightmares will persist, and dreams die as do you.

About the Author
For nearly thirty years, Saul passionately devoted and immersed himself studying Jewish life in interwar Europe. Overnight, not only did this 1000-year-old community vanish, but so did its complex communal infrastructure. What piqued Saul Chapnick’s interest and curiosity was finding out exactly what it was that disappeared. In talking to politicians, survivors, scholars, Jewish communal leaders from Eastern Europe, and making trips there, Saul Chapnick was able to uncover the richness and the tragedy of interwar Jewish life in Europe. At the same time, Mr. Chapnick has discovered a limited reawakening of Jewish life in his parents’ and ancestors’ native land, Poland. Saul Chapnick has talked in various venues whether Yiddish and Yiddish Culture still has relevance today. He has also spoke about the importance this 19th and 20th world has to contemporary life today as well as to post-Holocaust Jewish identity. He also prepares the adult participants of The March for the Living about modern day Jewish Poland
Related Topics
Related Posts
Comments