On this second day of the week leading up to International Holocaust Remembrance Day on January 27, I review this next document signed by my grandfather Jonas Noreika. He demands the transfer of Jews from one village to another. Why were these Jews transferred during the Holocaust? What was their fate? (Given a 96.4 percent murder rate, we are nearly assured of the outcome.) 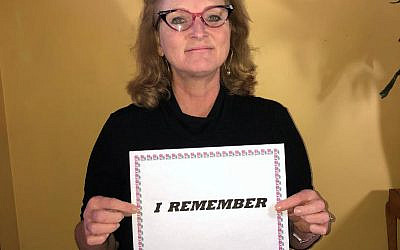 I am struck by my grandfather’s personal touch on this order, not just by his signature, but the elegant handwriting of the date and the number of the directive in blue pen, a careful detail to ensure the Jews would be transferred within three days. How easily and routinely he sent innocent human begins to slaughter. In just four lines.

According to Yad Vashem, in late August 1941, 46 Jewish men from Gruzdžiai were shot and murdered at the gate of the Jewish cemetery by Germans and members of the Lithuanian Activist Front.

It was a time of genocide for Jews with more than 200,000 murders. Their forced transfer could only mean one thing. Even if they were shot by Germans, they were rounded up and transported with the eager help of Lithuanians who often volunteered for the task.  According to the Simon Weisenthal Center, fewer than 1,000 Nazis occupied Lithuania during the Holocaust.

So many Lithuanians so efficiently and so zealously identified their Jewish neighbors, rounded them up, starved them, and ensured they were placed before Nazi guns for execution.

Here is just one document signed by Jonas Noreika in the chain of events that guaranteed genocide. 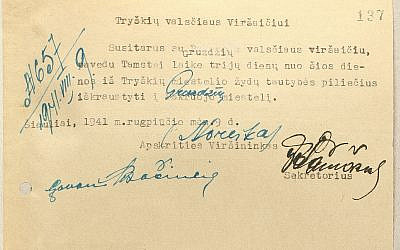 Having consulted with the local chiefs of Gruzdžiai, I charge you to move the residents of Jewish nationality from Tryškiai village to Gruzdžiai village within three days from today’s date.

By focusing on only seven of the documents he signed in 1941, this week I remember what my grandfather, Jonas Noreika (known as General Storm), did eighty years ago during the Shoah in Lithuania. I present these seven documents, one each day, as we approach International Holocaust Remembrance Day on January 27.

Noreika was involved in many of the administrative details leading up to the murder of Jews under his dominion. The Lithuanian government still considers his actions heroic. The shame is not over something that happened eight decades ago. The shame is current–as current and fresh as it was when this hideous document was written. Holocaust revisionism as a national policy catapults the crime from 80 years ago in 1941 to a current event in 2021. Those who venerate genocide murderers repeat the crimes of their ancestors. Is it ever going to end?

The Nazi’s Granddaughter: How I Discovered My Grandfather was a War Criminal releases March 9, 2021; the book is available for pre-orders: www.silviafoti.com