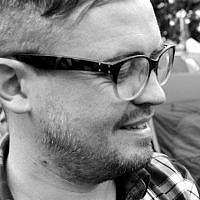 The Blogs
Derek Hopper
Apply for a Blog
Please note that the posts on The Blogs are contributed by third parties. The opinions, facts and any media content in them are presented solely by the authors, and neither The Times of Israel nor its partners assume any responsibility for them. Please contact us in case of abuse. In case of abuse,
Report this post.

Israel continued its remarkable performance at the Nobel Prizes this week, with two of its citizens picking up the award for Chemistry, the fourth time Israelis have won it since 2004. Arieh Warshel, Michael Levitt (both Israeli) and Martin Karplus (an Austrian) were awarded the top international prize for the development of multiscale models for complex chemical systems.

This brings to 9 Israel’s total number of Nobel Laureates, something the country has achieved in only 65 years of existence. (I am excluding the Peace Prize and reluctantly counting Literature in these totals). To put this in context, my own country, Ireland, has won five with only one being in science; Ernest Walton’s 1951 Physics win. The father of modern Chemistry may be Ireland’s own Robert Boyle, but Israel’s contributions have been nothing short of astounding and clearly the field’s leading lights now come from the Levant.

Israelis may or may not be aware that Ireland is one of the most outspoken critics of Israel. I have written about why this is so before and the reasons are too complex to address in this essay, but for whatever reason most Irish see Palestine as the plucky underdog in the Middle East and not Israel, a country that produces genius after genius while being surrounded by millions of people who despise its very existence. Given our own experiences with Britain, we tend to see in any weaker power a kindred spirit. It doesn’t matter that we share many values with Israel and far fewer with Arabs, who, if they’ve heard of us, see us as drink-sodden libertines. Never mind that we should want to draw parallels with Israel, the true underdog in the region who against all the odds created a prosperous democracy in a desert. In this battle many Irish have sided with the Palestinians and that’s just how it is.

Irish (and indeed global) opposition to Israel in recent times has manifested itself in several ways. The most well known of these is the BDS movement (Boycott Divestment Sanction), which seeks to isolate Israel ‘in order to force a change in Israel’s policies towards the Palestinians which opponents claim to be discriminatory or oppressive.’ The irony that the movement is one spearheaded by many Palestinians attending Israeli universities is apparently lost on its supporters. Comparisons with the odious apartheid regime in South Africa continue unabated despite a million Israeli Arab citizens enjoying more rights in Israel than anywhere else in the Arab world.

There is no academic boycott of Chinese universities, a country whose crimes against humanity would fill a library. University College Dublin partners up with a Chinese university and the news is met by tumbleweed. China’s torrent of human rights abuses is forgotten, the cultural genocide of Tibetans nothing but a faded bumper sticker on Irish students’ consciousness. Tibet? That is so nineties. Palestine is where the action is. Check out my keffiyeh.

It is hard to understand why there is one rule for Israel and another for China. Critics of Israel vehemently deny charges of anti-semitism but they don’t make it easy on themselves. To any even-handed observer their singling out of the planet’s only Jewish nation looks suspect.

Fine, continue your boycott. But do us a favour. Put your money where your mouth is and boycott everything to do with Israel. Any chump can boycott Israeli potatoes in their local supermarket and buy home grown ones instead. Nobody is going to lose sleep at night by replacing Israeli olives with Greek ones. Everyone can boycott Soda Stream and just buy a Coke instead.

So boycott Vaxil BioTherapeutics, the Israeli company which hopes to have a cancer vaccine ready in about six years, one ‘that could be applied to 90 percent of all known cancers, including prostate and breast cancer, solid and non-solid tumours.’

Boycott graduates of the Hebrew University of Jerusalem’s Biodesign program who have developed GuideIN Tube, a robotic intubation device that automatically identifies the lungs using an infrared source and helps navigate toward it, making a dangerous medical procedure far safer and easier.

Don’t forget those researchers at the University of Haifa, who have spent the last 13 years searching for the protein that could eradicate cancer, or the team at Haifa’s Technion University Israeli currently engineering ‘drought resistant plants that could be a game-changer in the global food crisis, requiring less water, yielding bigger harvests, and staying fresh longer.’

It would also be important to boycott those researchers at Tel Aviv University who have discovered that something called Mannitol may have the ability to halt the accumulation of toxins in the brain, which could ultimately lead to a new treatment for Parkinson’s disease.

All of this, trust me, is the tip of the iceberg of what is going on in Israel.

It is your right to boycott Israel and demand sanctions. But when the time comes, don’t be a hypocrite. Don’t cite Israel’s chemists on your university paper. Make sure when you go to Cyprus you don’t drink water that has been desalinated by Israeli technology, and if a loved one falls ill don’t take advantage of the many medical breakthroughs that Israelis make year after year. Nobody wants to be seen as full of shit. But that is what BDSers are when they bravely reject Israeli fruit in their local Tesco yet quietly embrace anything Israeli that makes their lives better.

If there comes a time when you or a family member desperately needs a life-saving Israeli technology or medicine, remember Desmond Tutu’s words: “Israeli universities produce the research, technology, arguments and leaders for maintaining the occupation”, and just say ‘no’. Who knows, a Palestinian breakthrough could be just around the corner.

About the Author
Derek Hopper is a native of Ireland, where he studied history at the National University of Ireland. He lives in Bangkok.
Comments