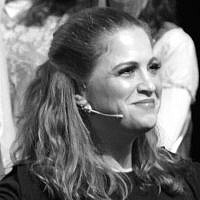 The Blogs
Tamar Krantman Weiss
Apply for a Blog
Advertisement
Please note that the posts on The Blogs are contributed by third parties. The opinions, facts and any media content in them are presented solely by the authors, and neither The Times of Israel nor its partners assume any responsibility for them. Please contact us in case of abuse. In case of abuse,
Report this post.

I was a big fan. I thought you were so clever and hilarious. Lately I’m a little disappointed…I’m thinking you need a wakeup call. The truth. Here’s how I think the truth will find you. I’d like to extend an invitation to you- come to Israel. A short trip even, it’s a small country, you can see the sites I’ve outlined in a day- but you better hurry and grab a seat on Mayor Bloomberg’s flight, since he’s the only one brave enough to break the embargo (if you will). Oh, and don’t worry about hotel fare- you can stay with me! I have a guest room, and here’s the best part- it’s also my bomb shelter- pretty convenient, right? Oh, but you’ll have to share with my 10 yr old and 7 yr old. They’re too scared to sleep anywhere else right now. You won’t mind- they’re very cute.

Anyway, once you’re over jet lag-( which shouldn’t really be a problem because days are like nights and nights are like days with the whole siren thing) may I suggest a road trip? Just you and I. First we’ll go to Schneider Children’s Hospital. Don’t worry, if there’s a siren on the way, you just follow my lead, We pull over on the highway- exit the car, find a safe spot and take cover. We lie face down and cover our heads. If you want to practice before you come, I’ll send you a video of my 2 year old neighbor doing it- just follow her instructions, she learned the drill in preschool, so it’s pretty simple.

So we’ll go to the allergy clinic at Schneider because my dad is a doctor there, they know me. You’ll like the waiting room. Lots of bright colored furniture, crayons and coloring books, kids’ tv programs- oh, and 80% of the people filling the seats are, wait for it…Arabs! Israeli Arabs, Palestinian Arabs, hell (ooh- I mean heck, I wouldn’t want to offend the Muslim sense of afterlife where “martyred suicide bombers” are surrounded in paradise with 70 virgins feeding them nectar- or something to that effect) there are probably Arabs from the entire Mideast over in there because Schneider is the only tertiary center for children in the Mideast. Makes you wonder…

But I digress, I’m hoping you won’t break any bones while we run for cover- or worse, get hit by shrapnel-especially if we make it to Jerusalem. Of course if we do make it to Jerusalem, the Arab riots there are a dime a dozen now, so chances are you’ll get trampled or stoned- and not in the sense you’re hoping for, I’m talking a large rock to the head, hurled with a sling shot. You see, I don’t want to have to take you to Shaare Zedek hospital in Jerusalem, because you may end up seeing the Israeli Arab ER doctor there who posted a photo shopped picture of Netanyahu sucking the blood from a wounded Palestinian child. Oh wait- he was put on temporary leave, phew. Not too sure about his Hippocratic oath. Maybe he’s the one who posted the picture of the Fogel children (may their memory be blessed- that’s what we say when innocents die) with blurred faces and claimed them as Palestinian victims of the butchering in Gaza. Too bad most of the world remembers what really happened there. Do You?

I’m sorry, this is turning out to be a hospital tour, I was hoping to show you the sites, but that will have to wait until after our trip to Soroka hospital, where the most severely wounded soldiers are being brought. I think you should interview some soldiers who have returned from battle. They probably speak English because, it’s funny, our government invests in education. Not funny ha ha, just funny when you compare that to what Hamas uses US dollars to invest in. So these soldiers, they’ll tell you what they encountered when they entered Gaza- 13 and 14 year old kids wearing explosive belts, ready to detonate, 6 year olds holding guns, and my favorite, Hamas militants (the adults, I mean) holding machine guns in one hand and babies in the other. You see, they clearly used all of their resources when they invested in their tunnels and have no money left for bullet proof vests (or education and supplies for their citizens) so they’re going for the human shield. Why not, when it gets the job done, AND creates sympathy in the Western world. You have seen the pictures of the dead children, right? You have referred to the humanitarian crises, if I remember correctly.

Next stop- the electric and water companies in Israel, who supplied the Gaza strip. It’s hard for them to restore power and water, because they were hit by a Hamas missile. Is that what we call irony? Maybe Alanis Morisette could fit that in to her song.

Oy vey, this is turning out to be a heavy trip. I wanted you to enjoy Israel! Maybe once you see the truth, you’ll make plans to come back one day. When things calm down. As they always do. For a year, maybe 2. Until Hamas or Hezbollah or another group decides they need your support again…

About the Author
Tamar Krantman Weiss is the co- founder and Executive Producer at Modiin's Women In Theater. She has worked as a freelance writer in the past. She lives with her husband and 4 children in Modiin, Israel.
Comments