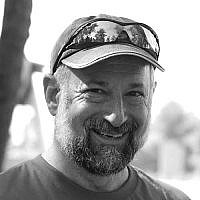 The Blogs
Richard S. Moline
Apply for a Blog
Advertisement
Please note that the posts on The Blogs are contributed by third parties. The opinions, facts and any media content in them are presented solely by the authors, and neither The Times of Israel nor its partners assume any responsibility for them. Please contact us in case of abuse. In case of abuse,
Report this post.

I originally wrote most of this last week, before the release of the now infamous video of you and your pal, Billy Bush. Even if I bought your childish “locker room talk” excuse (not sure where you work out), it wouldn’t come close to changing my mind.

I’ll cut right to the chase. I am not voting for you.

You are mean. Your venomous attacks go beyond the usual nastiness of an election campaign.

I could fill many more pages. I’m sure you won’t read this, but in the unlikely event you do, your response may be to belittle me, as well. I may even be so lucky as to garner a tweet.

It will be an honor.

About the Author
Rich Moline is a Jewish educator, non-profit executive, and volunteer leader living in Chicago.
Comments