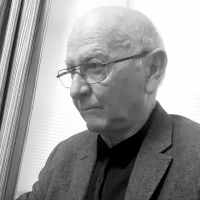 The Blogs
Dorian Galbinski
Apply for a Blog
Please note that the posts on The Blogs are contributed by third parties. The opinions, facts and any media content in them are presented solely by the authors, and neither The Times of Israel nor its partners assume any responsibility for them. Please contact us in case of abuse. In case of abuse,
Report this post. 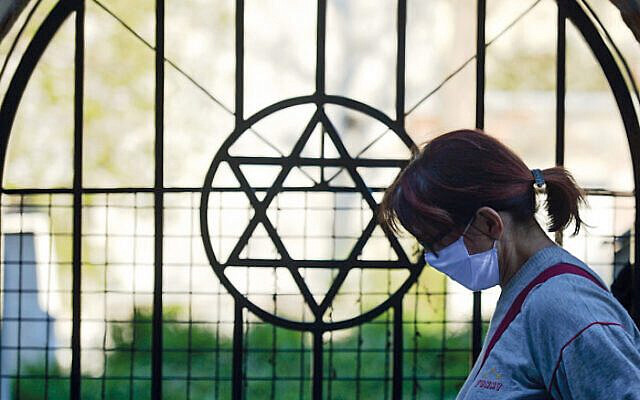 A masked woman passes by the Star of David outside a shul. Jewish communities have been disproportionately affected by the virus. (Photo by Artur Widak/NurPhoto via Jewish News)

I think I was seven or eight years old when I first heard the word “cancer”, or maybe then I became aware of it.   I asked my mother what it meant, and she explained to me that it was a disease, in most cases fatal.  I wondered why I hadn’t heard the term before.  After thinking for a while, I decided that life must be in layers and that you only see it horizontally.  At the age I was then, there was no cancer in the layer where my head was, so I couldn’t see or hear about it. But as I grow and become taller, my reasoning continued, my head would reach  higher layers, where I would meet all kinds of new things.

Around the same time, I started thinking a lot about death and I was terrified.  I lived near the city cemetery and often saw funeral processions passing by.  I was always amazed by the peace, the humility, the stoicism, even the fatalism with which the final separation from the dead in the coffin was accepted.

How could the mourners accept this without protesting, without shouting, without breaking or tearing everything to pieces?

How did they accept the greatest injustice of all?

And how could the deceased accept death?  Why did they let death close their eyes?  Why didn’t they resist?

I could not accept the idea of death in any way.

Just as I could not imagine how there could be a “bottomless sea”.  Exactly as I could not conceive the infinity, I could not accept the nothingness, the oblivion, my disappearance forever.

The thoughts of a child, obviously, but later I found them much better formulated by Guy de Maupassant, Eugen Ionescu and other great writers. “Do you often think about death?”

American playwright Arthur Miller was asked in an interview when he was over 80.  “Every day,” he replied.  Obviously, the fear of death, of the unknown, is omnipresent  throughout one’s life;  that’s why we do everything we can to avoid accidents or protect our health.  Over time, many people  manage to overcome the fear of death or accept the idea that the end of life is inevitable.

Gradually, that fear and the punishments meted out to sinners at the Last Judgment faded as the influence of religion diminished.  But there was something else. We became distant from the dead.  For several decades now, particularly in the developed world, people no longer die at home, among their loved ones, but in care homes or hospitals;  the body is quickly transported from there to the funeral home, and then to the crematorium or cemetery.

In both cases, the funeral service generally lasts only half an hour, during which time the departed is mentioned, eulogised and then sent in a hurry to “a better world”.  So even in the presence of death, we do not see it or prefer to ignore it and get over it quickly.

Of course, we take it for granted that many people die in plane crashes, road accidents, sports accidents or all kinds of natural disasters, conflicts, and wars. Anyway, the latter generally happens quite far from us, in Darfur, Ethiopia, Yemen, etc.

True, many died even closer to us, in the former Yugoslavia, but except for those directly involved, we, the outsiders, were not too scared. Ultimately, our leaders knew how to limit and eventually calm the overly heated spirits.  In fact, “pour decourager les autres”, they arrested, tried, and convicted some of the leading protagonists of these horrors.

Finally, our senses have been dulled by the unprecedented levels of real or fictional urban violence depicted in the movies on the small and big screen. So we continued to live our lives, too busy with home, work, holidays and entertainment to think about death.  In short, death no longer scared us as it once did. It was accepted as part of everyday life.

Maybe, but the new way of dying, Covid-19, is not part of the life we knew.

When you didn’t think you could die if you went to a wedding, or had a beer at a pub, or went to the theatre or listened to a concert at the Philharmonic.  All these activities are associated in our minds today with a skull and crossbones: Danger to Life.

We may have succeeded in ignoring death, or forgetting about it, even temporarily, but Death has not forgotten us.  And he reminded us of his existence through one of the most brutal forms possible, through a pandemic. And to prove his omnipotence, Death covered almost the entire globe.  His invisible soldiers – the viruses – have spread all over the world, from Wuhan to Los Angeles, from Rio de Janeiro to Stockholm.

This time, our leaders did not know how to react, many of them even took the contraindicated measures, something that says a lot about so-called “forward planning”.  (Reality quickly shattered the British government’s initial assurance that the country is “well prepared to deal with the situation, no matter how serious it may become.”)

After more than a year of obfuscation, late or wrong decisions, U-turns, conspiracy theories, agonies and over two million deaths worldwide (more than a hundred thousand in the UK alone), the population as a whole suddenly realized that the deaths due to Covid-19 are not just “cases” or “graphics” but mothers, fathers, brothers, sisters, husbands, wives, sons, daughters, etc.

These millions of human tragedies plus the associated ones, widows, widowers, orphans, those who died of other causes because they could not be treated by doctors and hospitals overwhelmed by COVID-19 patients, had another effect, in addition to the pain caused to families and damage to the economy, trade, culture, in short, life in general.

They shook us and made us recognize that death, which for many was until recently a distant perspective in time and space, is in the here and now.  And it scares us again.

We have learned to recognize its soldiers, but it constantly disguises them, constantly changing their uniforms to deceive us and ultimately kill us.

It is very possible that in the end man’s inventiveness will find a way to expel this scourge as well.  It has been causing incalculable human and material damage.  However, at the same time it reminds us of one essential thing, perhaps vital for us: that although life expectancy has increased enormously in the last century, we are literally one step away from death – “how fragile we are”, as the song says -. But if we do not forget this message, and we live with permanent awareness of it at the back of our minds, cherishing every moment of our existence, we will have an infinitely better life, as will those around us too.

About the Author
Dorian Galbinski is a journalist and a former radio producer in the BBC World Service, Romanian Section
Related Topics
Related Posts
Comments